3D Printing and the Jumping Robot

3D Printing and the Jumping Robot 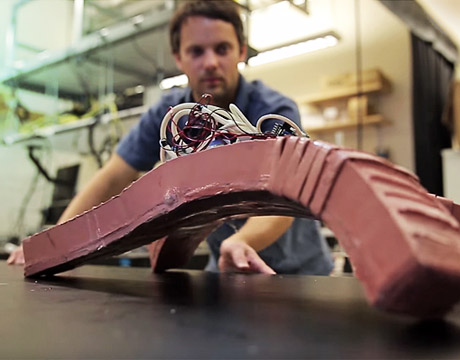 3D printing has helped improve many fields, so it would only be natural to see some impact on the field of robotics.

As a postdoc at Harvard University, Michael Tolley, now an assistant professor at the University of California, San Diego, got in touch with people in chemistry who had been working on the idea of soft machines. “And a question was, ‘Can you make a robot move and be composed primarily of soft materials?” he says. He became part of a team that decided to find out the answer.

A major challenge was that it is hard to move pneumatic robots quickly when they are non-tethered. “It’s fine to be tethered for some things, but if you want to do search and rescue you have to be able to cut the cord,” he says. “That’s a major area of how robots can be of value. That’s where wecame up withjumping as a way to move quickly. Rob Shepherd, now at Cornell, came up with internal combustion as a way to help make this happen.”

And all of what they would create for this jumping robot would be 3D printed except for the microcontroller valves, jump batteries, and fuel sources, he says. “The body of the robot, the rigid core, and soft exterior were all printed,” Tolley says. “Some of it was actually very intuitive.”

Even though the team was focused on a soft body, batteries and motor controllers seemed to be incompatible. “Unless you’re going to reinvent all these things, you have to deal with the interface between hard control parts and soft bodies,” he says. “We thought we should grow hard components into a soft body, and they should not really be fixed to each other in any way, and it worked. But it was a perpetual challenge in terms of interfaces. Keeping things connected, considering pneumatic connections, [ignore these] and you could find the robot could be jumping violently into the air.”

They hoped bringing in soft materials would absorb the impact of coming down from the jump, and prevent the creation from breaking.

“When you consider how much robotics can cost, anything that can help its lifespan has to be considered," he says."The soft materials help it work on many surfaces and for a longer period of time.”

The robot was ultimately designed in a nestled hemisphere design and is described by Tolley as looking like a deflated basketball. Then when oxygen and butane are injected, it becomes a full basketball and that’s how the jump occurs. Testing proved successful, and the robot is able to repeatedly jump roughly a meter high without breaking.

Even though Tolley says they’re proud of their accomplishments to this point, he says this marriage of differences came long before the team went to work. “Much of the inspiration between soft and hard materials came from asking how nature does this,” Tolley says. “Like the octopus. It can be rigid when you think of the beak but then other parts of the body are soft. It’s amazing what clues are all around us.”

Learn more about the latest technologies in 3D printing at ASME'sAM3D Conference & Expo.

For Further Discussion
Much of the inspiration between soft and hard materials came from asking how nature does this.Prof. Michael Tolley, University of California, San Diego