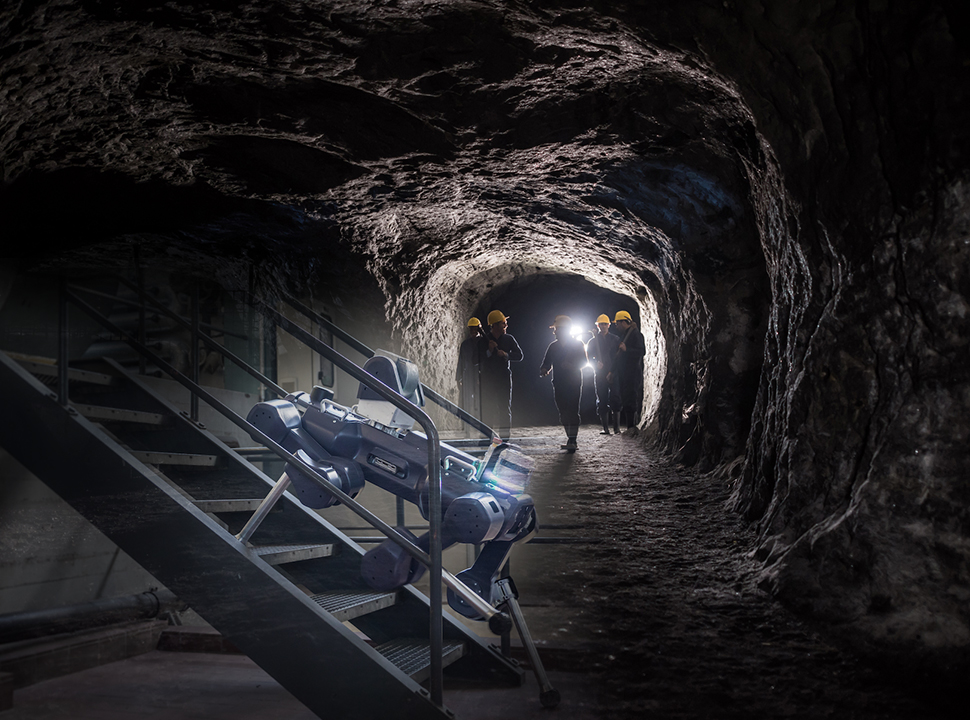 ANYbotics, a deep-tech robotics company based in Zurich, is developing the autonomous quadrupedal robots of the future. With several dozen “ANYmal” robots already in operation around the globe, the company has ambitious plans for expansion. But it wouldn’t be possible without the help of Open Source partners who are writing their own programs to improve and extend ANYmal’s capabilities.

“The ANYmal operating software is based on the Robot Operating System (ROS), which is 100 percent open source,” said Dr. Marco Hutter, co-founder of ANYbotics. “From there, we build our proprietary software. The access given to research partners is open and adaptation and improvement is encouraged and supported.”

ANYbotics has operated in this manner since being founded in 2016 as a spin-off from ETH Zurich. Starting as a Wyss Zurich project, the first sale was recorded in 2017. The first offshore deployment of ANYmal was accomplished in 2018. And since 2019, the ANYmal C, ANYmal D, and ANYmal X legged robots have been rolled out.

Through every iteration, the main design goal of ANYmal is to withstand tough terrain and conditions, common for rugged industries such as mining, offshore drilling, power plants, train depots, and even paper pulp factories.

More for You: We are Roboticists

“The robot can go essentially anywhere a human can go,” said Hutter. “ANYmal can easily go up and down stairs. It can navigate on slippery or wet floors, on gravel, on sand, on hard or porous rock, and in forested areas.”

The power of the ANYmal’s design is all in the legs. There are three elastic actuators on each leg, giving it a wide range of motion. A small mechanical spring at the output of the joint protects the gearbox from impacts when walking and allows for torque measurement. It is all about balancing the torque and the weight. ANYmal is heavy, weighing in at about 130 pounds, so even one wrong step could cripple the bot, making the elastics essential to absorbing the shock.

“The robot is a highly loaded system, you can imagine every step the robot takes is a load cycle,” Hutter noted. “So high cycle fatigue was a predominant design criteria for almost everything on the robot. But through testing and good simulations, we can make sure that we have a good grasp on the internal stresses in the system.”

ANYmal is also completely waterproof and can be submerged up to three feet. As for ANYmal’s interface, ANYbotics designed a platform that is both flexible and versatile. It utilizes six 3D cameras, a lidar scanner, and optical and thermal cameras, as well as a number of specialized sensors depending on the job it is performing, to create and distribute data to the customer. Hutter said the firm can cover about 90 percent of the needs of its customers with the platform, and each is further customized to the customer’s needs.

The ANYbotics team is currently working on releasing the next phase of the design. Future developments include adding things like a robotic arm so the bot can pull levers and open doors. They are also working on an explosion-proof robot that could withstand conditions in highly flammable environments. They also want to improve the visualization and sensing of the system.

In every stage of development, the biggest challenge has been the integration of materials and systems. In many cases, the tchnology or materials that are on the market are not compatible with the design. So, the team has had to develop many of the pieces and parts on their own.

“We can’t just play industrial Lego,” Hutter said. “We can't just buy some actuators and things off the shelf and plug them together and have a working robot. So we had to develop our own theories and measurements, and research our specific problems. So it really goes from material science to manufacturing to engineering to testing....It’s the full circle.”

The team has a more collaborative vision for the future development of ANYmal. They’d like to see the bot incorporated into workplaces, acting as a kind of coworker with its human counterparts. But to do this, current technology has to take many leaps.

More for You: 5G Pilot to Test Factory of the Future Concept

“You're going to have robots that are going to be able to decide on the spot what they should do next, based on what they see from the environment,” he said. “But that's not where we are. This is going to take five or 10 more years.”

ANYbotics faces the same challenges as many smaller tech startups face. “You can really only be in this business if you have a team that iterates quickly, that is agile, and that tests frequently,” he said. “And I think we strike that balance.”

Cassandra Martindell is a technology writer in Groveport, Ohio.