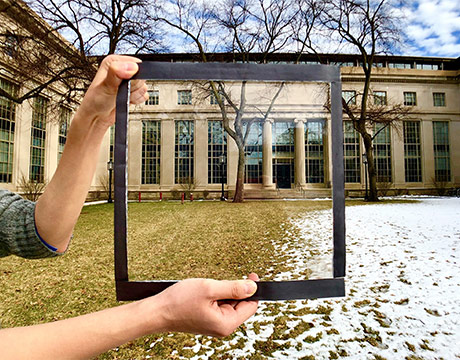 MIT researchers have developed a coating for windows that rejects up to 70 percent of incoming solar heat. Image: MIT

Massachusetts Institute of Technology engineers have discovered a way to make an optical film containing hydrogel microparticles that blocks radiative heat transfer. If commercialized, the covering could reflect nearly 70 percent of the solar heat coming through a building’s windows and potentially save billions of dollars in energy costs.

Smart technologies that control solar heat through windows show great promise for reducing energy consumption. Air conditioners, for example, consume high amounts of energy during hot summer months, sometimes straining the energy grid. About six percent of all the electricity produced in the U.S. is used to run air conditioning, at a total annual cost of $29 billion.

To help lower those costs, research targets light management via thermochromic smart windows. Their advantages include autonomous operation and a simple design. Their performance, though, is challenged at higher phase-transition temperatures, the temperature required for a substance to change from a solid, liquid, or gas state to a different state.

As a result, temperature-responsive hydrogel materials are emerging as a promising alternative to conventional thermochromic materials.

“Certain gels can absorb water and turn transparent when hydrated,” said Nicholas X. Fang, professor of mechanical engineering at MIT. “This triggered us to look for materials that can change from hydrated phase to dry phase with increasing temperature.”

The team focused on “thermochromic” materials—temperature-sensitive materials that temporarily change phase, or color, in response to heat. They selected an emerging thermochromic material made from poly (N-isopropylacrylamide)-2-Aminoethylmethacrylate hydrochloride (pNIPAm-AEMA) microparticles. These fiber-webbed spheres are filled with water. When temperatures reach 85°F, the spheres constrict into tight bundles and squeeze out the water. These bundles of fibers turn the material translucent, thereby reflecting light.

“It’s like a fishnet in water,” Fang said. “Each of the fibers making the net reflects a certain amount of light. But because there’s a lot of water embedded in the fishnet, each fiber is harder to see. But once you squeeze the water out, the fibers become visible.”

Fang’s team created a solution containing the microparticles, which they applied between two sheets of 12-by-12-inch glass to create a film-coated window. They also expanded the molecular chain of each microparticle, so that when it contracted in response to heat, the diameter was about 500 nanometers, creating more area to reflect light. When the film was exposed to light from a solar simulator, it turned frosty in response to the heat.

“For a regular glass window, after 30 minutes of exposure, the temperature behind the window reached 102°F,” Fang said. “However, with our film the temperature plateaued at 93°F. This shows we can block more than 75 percent of heat from the sunlight.”

Fang’s results showed the solar modulation was effectively extended into the infrared region.

“An unprecedented solar transmittance modulation of 81.3 percent was achieved at about 89°F with our hydrogel thermochromic device, with great scalability and stability,” he said.

The material could provide an affordable and energy-efficient alternative to existing smart window technologies, many of which are inefficient or, like some electrochromic windows, require more power to operate them. The film remains highly transparent below 89°F. At higher temperatures, it acts as an autonomous system that rejects heat, thereby passively cooling a building while still letting in a good amount of light.

Going forward, Fang plans to look for other ways to improve the film’s heat-shielding properties.

“We only scratched the very surface of this interesting optical material,” he said. “We are also seeking industrial collaborators to co-develop the technology for retrofitting existing windows for enhanced energy efficiency and visual comfort.”

How Engineers Can Resolve Conflict and Save Their Business

Polymer Composite Can Regulate Its Own Temperature