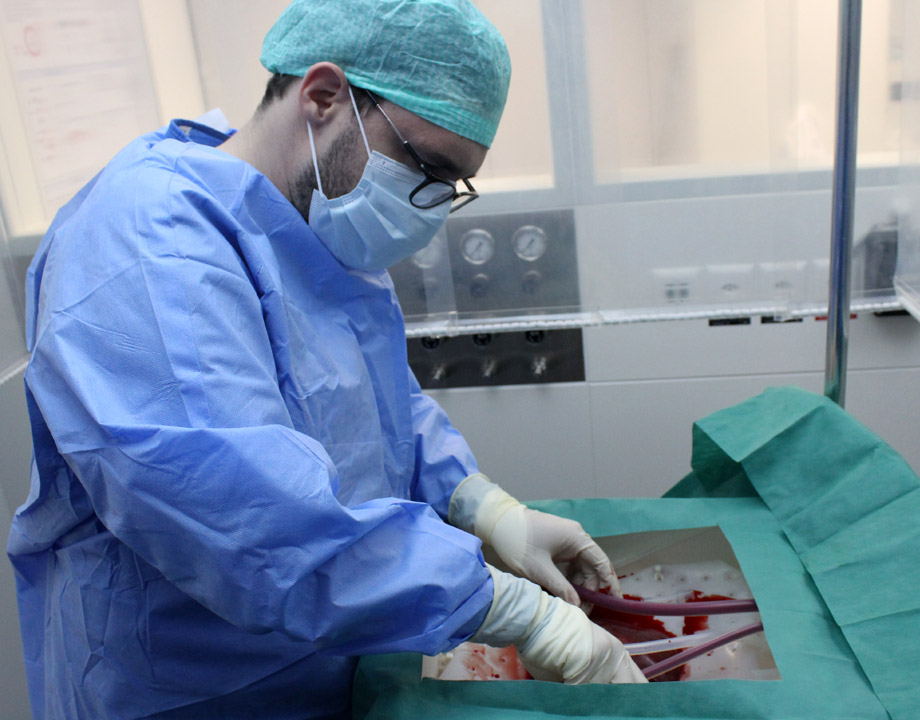 A surgeon connects the donor liver to Liver4Life, which can keep it alive for up to seven days while it regenerates. Photo: University Hospital Zurich.

Biomedical Engineering Building Equipment Contractors Chemical and Pharmaceutical Manufacturing
Researchers in Zurich have created a machine that can keep a human liver alive and functioning outside the body for up to one week. Until now, that has only been possible for about one day. The new device gives medical staff more time to find the best possible recipient and plan a transplant operation. It also gives injured or damaged livers time to heal—opening the door to using donor livers that would not be healthy enough to transplant within 24 hours.

The technology behind this advance is Liver4Life, a machine that simulates the environment of a human body in an external location. It nurtures an injured liver back to health by recreating the supportive functions of organs critical to liver health, including the heart, lungs, kidney, and pancreas.

How well does it work? Researchers from Wyss Zurich Institute, University Hospital Zurich, ETH Zurich, and the University of Zurich tested 10 human livers that had been rejected by European transplant centers in the Liver4Life machine. As documented in a study published in Nature Biotechnology, six regained full function within a week.

This could be good news for the 13,000 people in the United States alone who are on the liver transplant waiting list—the second highest demand for any organ. The average wait is 11 months. Those who receive a liver have an excellent chance of survival. In one study, 77 percent of children and 50 percent of adults were alive 20 years after a liver transplant.

Many donated livers never make it to patients on time. Transplant centers routinely reject damaged or injured livers. The Zurich researchers thought that they might be able to increase the number of viable livers by improving the perfusion technology used to pump blood through organs while capitalizing on the extraordinary nature of the liver itself. It is the only organ that can regenerate: Someone who donates half their liver will have a completely regrown organ in less than two weeks.


Perfusion involves pumping a fluid through the lymphatic system or blood vessels to an organ or tissue in the body. In a liver perfusion machine, the organ is placed within a vessel, and fluids are pumped through it to maintain blood flow, oxygenation, and temperature.

Generally, perfusion machines can keep livers alive for about nine hours. In 2019, a team from Harvard and other Boston institutions used a combination of machine perfusion and supercooling to extend that to 27 hours.

Recommended for You: How to Make a More Precise Hypodermic Needle 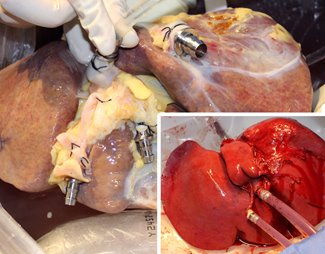 Two livers. The one on the top left is damaged and discolored, while the one treated with Liver4Life in the lower right window is a healthy pink. Photo: University Hospital. Zurich
Despite its ability to regenerate, the liver is a demanding organ. While it accounts for only 2.5 percent of body weight, it receives 25 percent of the heart’s blood output. That is because it performs more than 500 separate functions. These functions range from producing bile to help with absorption, storing iron, and processing nutrients, medications, and hormones to making blood-clotting proteins, filtering toxins like alcohol from the blood, and regulating immune responses.

It also relies on several other organs, including the heart (to pump blood through it), the pancreas (to provide metabolic hormones); the kidneys (to provide waste disposal); and the lungs (to provide oxygen and remove carbon dioxide).

Existing perfusion machines recreate the heart function. The Zurich researchers sought to recreate the pancreas, kidneys, and lungs as well.

By studying 100 healthy pig livers, they were able to identify what they needed to do: control metabolic hormones, prevent the breakdown of red blood cells, remove waste products, control oxygenation, and simulate diaphragm movement.

“Basically, we built the machine out of the pig studies,” said Philipp Rudolf von Rohr, a professor of mechanical and process engineering at ETH Zurich. “We trained and improved the machine based on them.”

They began experimenting with the standard perfusion components—pumps and an oxygenator. The livers stayed alive just a few hours. Then they added an automated dialysis membrane to filter out the excess sodium and other waste products. In the body, this process would be handled by the kidneys. The membrane boosted the livers’ viability to more than a day.

“The kidney was not so easy,” von Rohr said. “Many livers contain up to 40 percent fat. This fat can block the dialysis membrane. So this was really challenging.”

Recreating the hormone levels of glucagon and insulin, which are produced by the pancreas to regulate blood sugar, proved difficult as well. Experimenting with various doses resulted in high blood sugar. Their solution was to add a continuous online sensor that automatically monitors and adjusts glucose levels.

You May Also Like: 3D-Printed Organs Nearing Clinical Trials

They also observed that when pigs (and people) breathe, they move their diaphragm, the muscle that lays just above the liver. The pressure generated by this movement is essential for a healthy liver. To simulate it in the Liver4Life machine, they place the liver on top of an inflatable balloon connected to an air oscillator.

They also integrated the power supply into the machine, making it portable and self-maintaining for a few days without human supervision. The custom software operating the machine uses a patent-pending algorithm to control the levels of biochemicals perfusing through the organ. 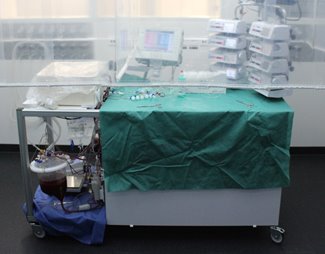 With the Liver4Life perfusion system, the liver is connected to the white container on the left. Photo: University Hospital.
When it came time to test human livers, they chose 10 that had been rejected by all European hospitals. (They were not told any causes of injury.) They connected each liver to the machine through its hepatic artery, portal vein, vena cava, and bile duct.

“The machine is really simulating the body,” he said. “The blood stays in very good condition. We have temperature control. We have flow control. Everything is being measured that we can measure online.”

The six livers that survived a full week showed a decrease in injury and inflammation markers. The other four did not, eventually going into liver failure.


Von Rohr said a better understanding of how, exactly, the liver regenerates is essential to improving the survival rate. “I really think now it’s more a question of understanding what happens with the microbiology and chemical processes,” he said. “There is a big question mark.”

In the future, the machine could potentially be used to remove a damaged liver from a patient, heal it, and return it to the same person. Another possible use is to split a single donor liver into anatomical segments and grow each piece within the machine.

It might be useful for other organs too. “Our focus, of course, is the liver, but I’ve looked into hearts,” he said. “I think it makes sense to go into other directions.”

To commercialize Liver4Life, the team needs to simplify the machine. “We have a Ferrari,” von Rohr said. “It’s very complicated, and a very good system, but it costs something. And when you want to go to the market, you have to find a way to decrease your price.”