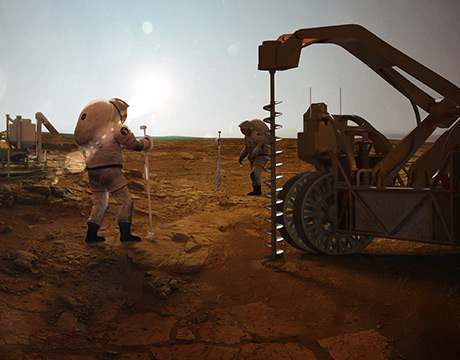 So you want to go to Mars? So does NASA, but they could use some help, and recently, they received it in the form of the 10 student teams that signed up to compete in NASA’s Mars Ice Challenge.

With the surface of Mars largely covered in ice, it is clear that drilling through that ice will be a major challenge for future colonists, astronauts, and others if they want to obtain water for all of its obvious benefits. Accordingly, the competition consisted of teams competing at simulated Martian ice stations set up in Langley’s research aircraft hangar. Layers of material and solid blocks of ice made up each station, and students were asked to design and build their own equipment in order to drill.

“It’s a year-long process but if you’re one of the universities picked, it’s two water extraction days in competition and a paper and a poster also make up your score,” says Ben Zinser, who had just finished his sophomore year as a mechanical engineering major when he competed with first-place winner Northeastern University. “They’re trying to simulate a situation where there is about half of a meter of ice to get through that’s overburdened with a mixture of clay, silt, and sand, and underneath is ice.”

Throughout the year, students write a series of proposals and explain their designs as part of the overall process, says Zinser. “We used SolidWorks to help with the first part,” he says. “As you progress, you would later get $5,000 to begin building your system, later you write a mid-point paper on progress, and then $5,000 more comes later.”

In the end, the pool of applicants was whittled down tenteams for the June 5-7 final competition held at the Langley Research Center in Hampton, VA.

For You: Top 10 Space Missions Set to Explore New Frontiers

Zinser’s team definitely felt the heat as the competition neared but had the benefit of a summer term to do significant test runs. “We used concrete cylinders and filled a bag with water. [We put] chunks of cylinders with a sack of dirt above it, trying to simulate the best we could what the competition would be like,” he says.

Arriving at Langley Research Center, Zinser says you quickly realize this isn’t really about where you finish or place and more about a community of engineers that have a common goal. “All these teams have been at it all year,” he says. “You’re excited that you’ll get to talk with them and learn what they did and you’re around all these people who have this [same] interest.”

The most suspenseful part of the competition for the Northeastern team was the water extraction segment of the competition. Their strategy employed a two-tool system. “One [tool] was an augur that drilled through the dirt and then we would insert an extractor through the hole which was essentially a tube,” he says. “At the tip of the tube was aluminum and we put resistors in. Getting very hot, they melted the ice at the bottom of the hole and we ultimately saw water get to the surface.”

In the end they were successful but there were many anxious moments along the way. “You have to remember that our team tried to be one of the final teams picked last year and we didn’t even make it,” he says. “We waited, waited. And then came a single drop of water, Just a single drop at first. But, when we saw it, we let out a cheer. That single drop was one of the best moments I’ve ever been a part of.”

They would end up with 1,370 milliliters of water extracted the first day, Zinser says, the most of any team, and 1,839 milliliters the second day, when the competition dictated they use remote control, he says. The team’s scores for their paper and poster were also tops, enough to make them this year’s champions, an honor that was very gratifying.

But another reward was to come.

“After the competition, NASA had all the teams in a big lecture hall for a discussion and you just get a great feeling from the bond you have with the other students trying to do something that no else has done,” he says. “No one has been to Mars and NASA genuinely is looking for your ideas, not just to have a competition for schools. They’re taking you seriously and all the teams took each other seriously. You just felt something special being in that hall.”

Read More:
A Cheap Way to Convert Vapor into Fresh Drinking Water
What's It Like for an Engineer to Work at a Startup
The Great Ocean Cleanup Begins

For Further Discussion
No one has been to Mars and NASA genuinely is looking for your ideas, not just to have a competition for schools. Ben Zinser, Northeastern University