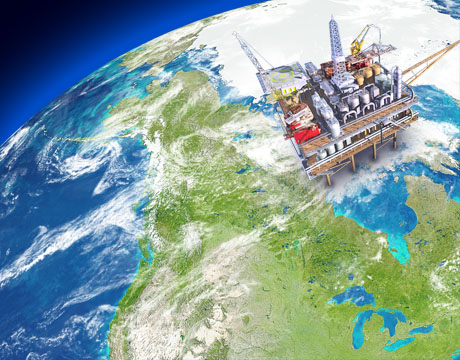 The Arctic remains one of the final frontiers for oil and gas exploration. High oil prices, engineering advances in offshore equipment, and climate change are prompting renewed interest in gas and oil exploration in Nunavut, Canada's largest territory and home to the northernmost permanently inhabited settlement in the world.

The Nunavut Settlement Area (NSA) sprawls across 810,000 square miles, approximately twice the size of Europe, and is populated by approximately 33,000 aboriginal Inuits. The region is characterized by extreme cold, extended seasons of darkness, hurricane-strength storms, and poor visibility, all affecting access and working conditions. Average daily temperatures during winter months range from below -30 °C to -55 °C on the extreme end and wind chills can approach -70 °C.

In 2009, the U.S. Geological Survey (USGS) estimated that the Arctic could hold as much as 160 billion barrels of crude oil, the equivalent of five years of global oil consumption and that includes considerable oil and gas reserves in the NSA. According to Peter Taptuna, Nunavut's Minister of Economic Development and Transportation, in a July 2012 interview with Canada's Financial Post, "Most of this potential [both already discovered, and undiscovered]lies in the high Arctic Archipelago, known geologically as the Sverdrup Basin. In the Sverdrup Basin there are 19 fields historically discovered that are still held by companies as Significant Discovery Licenses. The best estimates of discovered resources are in the range of 500-million to 1,800 million barrels of oil, and 17 to 27 trillion cubic feet of gas."

Experts estimate that the Sverdrup Basin alone could hold up to approximately 11 percent of Canada's total crude oil resources and 20 percent of Canada's natural gas resources. But even with such vast potential, no exploration activity has occurred in the area since the mid 1980s. No doubt the inactivity is related to the huge technical and logistical challenges that exist in drilling and transporting the oil in such a hostile, barren environment. However, new drilling technologies, market demand, and possibly global climate change may be changing the arctic exploration landscape.

If the meltdown trend continues as some scientists expect, arctic shipping lanes may be open for a longer season, making it more economical and practical to transport carbon products for production.

According to the American Petroleum Institute (API), technology advances are making arctic exploration, development, production, processing, and distribution of oil and natural gas cheaper, more efficient, and more protective of the environment.

New technology currently being employed in the arctic include ice roads and ice drilling pads, directional and horizontal drilling to limit the surface area of well site locations, coiled tubing drilling, and "grind and inject" practices. Other technology innovations being developed include airstrips built of thickened ice, new icebreaker designs, ice-breaking supply boats, and floating drydocks for servicing the other ships on site.

Royal Dutch Shell received a controversial go ahead from the U.S. government to drill offshore during the summer of 2012 in the Beaufort Sea and Chukchi Sea, just off the coast of Alaska, and southwest of Nunavut on the edge of the Arctic Ocean. As of August 2012, Shell's drilling plans were delayed by regulatory issues and by the incompletion of a vessel to carry and deploy an oil containment system in the event of a spill. Shell had planned to dig an exploratory well in each area and agreed to a deadline of September 24, 2012 to complete drilling. It is unknown at this time whether Shell can meet that deadline. If not they will have to wait until July of 2013 to start drilling.

In 2009, the U.S. Geological Survey estimated that the Arctic could hold as much as 160 billion barrels of crude oil, the equivalent of five years of global oil consumption.