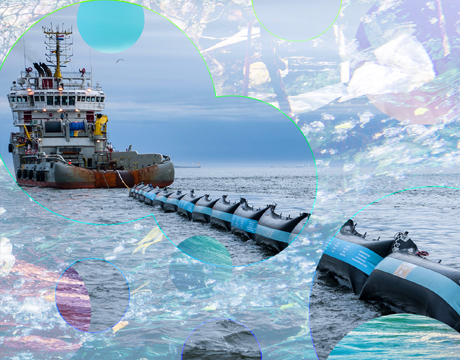 The ocean depths between California and Hawaii arenot the place to seek the mysteries and wonders of the sea. For it is there that the five trillion pieces of plastic that make up the Great Pacific Garbage Patch reside. Now roughly a sixth of the size of the entire U.S., it’s enough to make one throw up one’s hands and declare that we are doomed.

But Boyan Slat is no thrower-up-of-hands. Slat, 24, has designed a 600-meter tubular float and skirt system to clean up the mess. His company, The Ocean Cleanup, where he is CEO, tested its first 120-meter section outside of San Francisco in May. Already at work creating the remaining sections, the company plans to deploy the first completed system this year. The company eventually hopes to have 60 such systems floating in the Pacific Ocean, which Slat estimates will remove half of the garbage patch in five years and 90 percent by 2040.

Slat began looking into how to clean up the garbage patch while in high school after coming face-to-face with more plastic bags than marine life while scuba diving in Greece. But the task of trying to clean up the ocean seemed impossible: the cost of using any kind of vessels through the expanses of the ocean was astronomical.

“The closest I ever came to a ‘Eureka-moment’ was when I was making some sketches on a napkin in a restaurant while on holiday in Portugal,” Slat says. “I wondered, ‘Why would you move through the oceans, if the oceans can also move through you?’ ” Slat went on to study aerospace engineering at the Netherlands’ Delft University of Technology, but dropped out to devote his time fully to The Ocean Cleanup.

For You: Targeting China’s Mountains of Sludge

The system he designed moves passively through the waters. The floating barriers have a three-meter skirt hanging below them. The floaters catch the power of the wind and the waves so that the system moves in the same direction but slightly faster than the refuse in the water, allowing it to collect the trash. “To catch the plastic, we need to act like plastic,” says Slat. The skirt is impenetrable, so sea life can’t be caught in it and can swim away with the current.

Five solar mounted pods with sensors and GPS will collect data about the environment and the system’s location. They’ll also alert the company if anything is broken. The pipes themselves are fitted with water tight bulkheads every 24-meters, so if there is any kind of leak or break, they’ll still float.

To catch the plastic, we need to act like plastic.Boyan Slat, CEO, The Ocean Cleanup

The plastic collected by the system—likely three tons a week—will be harvested by recycling companies. “We have shown ocean plastic is of surprisingly good quality, and can be turned into high quality projects,” Slat says. “Several companies have already shown interest in buying up the plastic once we’ve taken it out of the ocean, and are easily able to handle this level of plastic.”

The entire system is powered by the sun, the wind, and the water, putting it at the mercy of the environment and the currents. But the system is designed to handle many unforeseen problems. “According to our computational models, the number of times a system drifts out of the gyre is minimal,” says Slat. “In case this happens, our cleanup support vessel will be able to tow the system back into the hotspot where it would easily be put back to its cleaning duties.”

If The Ocean Cleanup proves effective after its launch this year, Slat hopes to send his system to the four other ocean spots where plastic collects.

“The launch of the first 600-meter system is a very exciting moment for The Ocean Cleanup, and will be the start of the great cleanup effort,” Slat says. If it all goes according to plan, we can once again marvel at the oceans mysteries, unsullied by trash—and maybe Slat can have another go with the scuba gear in Greece.