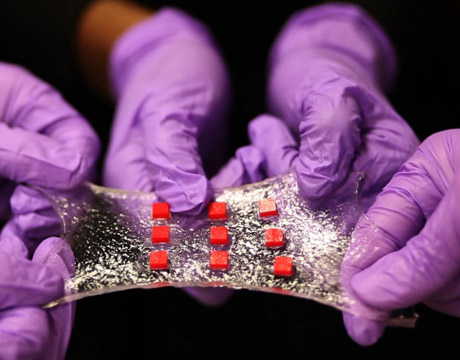 A new stretchable hydrogel can be embedded with various electronics. Image: Melanie Gonick/MIT

Sometimes a patient needs more medication, right away. Maybe a nurse isn’t available. They hit the “call” button, but it’s a busy night, everyone is doing the best they can. In other words, they just have to wait. Or worse, a patient is not even at the hospital but has trouble moving around their home. What do they do?

One day the answer may be “nothing.” Hydrogels are well known in the field of medicine but how about using them for a system that will sense when medication is needed and deliver it?

Xuanhe Zhao, an associate professor in the department of mechanical engineering at MIT, explains how the hydrogel invention came about and developed over time.

?“Conventional hydrogels such as Jell-O that we eat? are weak and brittle and they cannot adhere to engineering materials such as metals and ceramics well,” he says. “Over the last decade, many groups, including my group, have significantly improved the toughness and strength of hydrogels. In 2015 and 2016, my group further invented a set of methods to robustly bond hydrogels to diverse solid materials, including metals, ceramics, silicon, SiO2, and various elastomers. These breakthroughs in enhancing physical properties of hydrogels enable the current design of stretchable hydrogel electronics and devices.”

Says Zhao, “The system is generally made of biopolymers, water, and components of electronic devices,” he says. “Since most parts of the human body are made of hydrogels, the biocompatible ?hydrogel electronic devices can potentially provide long-term, high-efficacy interfaces between the human body and electronic systems. For example, a smart hydrogel band-aid may measure temperature changes around a wound area and deliver specific drugs accordingly.”

As far as the electronics for the invention, the hydrogel matrix has components such as LED lights and temperature sensors. “Many electronic devices are encapsulated by an insulating layer before being integrated with the hydrogel,” he says.

Of course, there have been a number of challenges along the way in this work. “Maintaining the high robustness, high biocompatibility, and proper functions of the electronic devices in the system is a great challenge,” Zhao says.

The invention has a futuristic feel. You would almost expect Bones from Star Trek to use it on a wounded Captain Kirk. But its own future might still see further improvements.

The idea is to bring in more types of sensors, including those that directly show the presence of infections in a system.? “We will also carry out in vivo tests on the system to seek feedback,” he says.

And hopefully, the work will go well enough that one day the hospital call button will be that much more of a last resort.