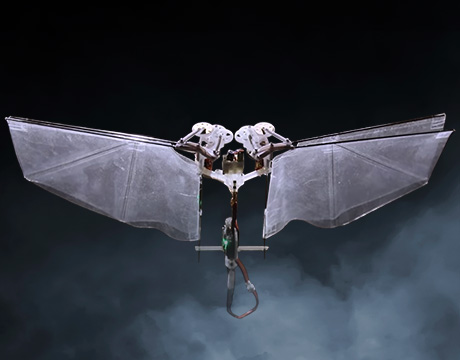 Engineers at Delft University of Technology in the Netherlands have created miniature drones that fly and flit just like insects. When you watch one of their drones, called DelFly, in action, it will flutter over a green patch of grass, beating its transparent wings so fast it’s hard to tell how many it has exactly. It hovers over the grass, darts back and forth, and then shoots upwards making an impressive 360-degree flip, worthy of an aerobatics show.

The drone flies like a bee, and some researchers hope that such flying robots could one day replicate some of the important agricultural work that bees do.

But when G.C.H.E. (Guido) de Croon began working on what would become DelFly, he wasn’t thinking about building a mechanical pollinator. Instead, de Croon and his team at the Micro Air Vehicles Laboratory at Delft were interested in creating a small flapping wing drone capable of carrying a camera.

The first DelFly, built in 2008 by 11 students as a capstone project, was insect-like, but on a scale of the giant dragonflies from the Carbonaceous era. Made from ultra-lightweight materials—thin sheets of Mylar stretched over a carbon fiber frame—it weighed 21 grams (slightly less than an AA battery) and had a wingspan of 50 cm.

Over time, as the Delft team learned more, the drones miniaturized. DelFly II had about half the wingspan and could hover and fly forward and backward, staying airborne for 15 minutes. DelFly Micro shrunk to 3 grams and a 10 cm wingspan. The Guinness Book of Records named it the “smallest camera-equipped aircraft in the world.”

That’s still enormous as bees go. A worker honeybee weighs about 130 milligrams and has a wingspan of less than 1 cm.

As the drones lost mass, they added capability. The 2013 DelFly Explorer gained autonomous navigation, thanks to a stereovision camera and hardware for processing obstacle detection—no mean feat for a system that could only weigh a few grams. Self-driving cars make complete 3D maps of their environment to feed into their obstacle detection algorithms, but that requires sensors, processors, and memory, even the lightest of which would be too heavy for a gossamer robot to lift.

So the team built different vision algorithms, inspired by hunting dragonflies. “If you ask a biologist how dragonflies catch flies, the current hypothesis is that they keep it in the same position while making it bigger and bigger” as they approach it, de Croon said. “So you could make it very complicated and calculate the fly’s velocity and direction—or you can use the same kind of simple intelligence they use. That’s what we did—we either programmed it into the robot, or tried to make the robot learn it by itself.”

The drones learned to avoid collisions, but they weren’t very stable in flight. Even when they flew inside a room, an air-conditioner’s draft could toss them around. They needed more agility to recover from such gusts. The team realized they had to abandon some of the traditional concepts of flying machines and once again watch how insects work.

The result was the DelFly Nimble. Unlike its predecessors, whose flight is controlled similar to conventional airplanes via deflections of specific surfaces on the tail or behind the wings, DelFly Nimble has neither. Instead, it is controlled by insect-inspired motion adjustments of its two pairs of flapping wings.

The tail’s absence makes DelFly Nimble very agile and less vulnerable to wind. That enables it to dart as nimbly as a fly escaping a swatter—and then straighten itself out and return to its original heading.

“If you try to swat a fly, it will make a super sharp turn like a fighter jet, and then it will quickly turn its body into the flight direction again,” de Croon explained. What’s really interesting, he added, is that the fly doesn’t do it consciously. It does so “passively,” essentially relying on the aerodynamic forces specific to its flapping wings.

Even more surprisingly, so does the robot, even though it hasn’t been programmed to do it.

“The robot also corrects for the flight direction error, but we know for sure that we didn’t put this into the control code,” de Croon said. “It’s a new effect and we think it applies to all flapping wings.”

The Delft engineers have various practical applications in mind. For example, when perfected, the bots could flit around greenhouses spotting plant diseases with their cameras.

The robots could also be fitted with apparatuses to perform an even more vital and insect-like task—pollinating crops. That sounds like something out of the Black Mirror television series, but the idea of building robotic pollinators predates that. A mysterious plague called colony collapse disorder has decimated entire beehives worldwide during the past 20 years. Scientists pondered many possible causes of bees’ plight, including pesticides, habitat loss, poor diet due to the limited variety of agricultural crops, parasites called Varroa destructor mites, and other pests—or a combination of these factors.

No matter the cause, science provided no clear remedy for the little creatures that helped our crops bear harvests for millennia. In America, bees pollinate about 80 percent of flowering plants and about 75 percent of the nuts, fruits, and vegetables humans eat, according to the U.S. Department of Agriculture. Other countries are similarly dependent on healthy bees to assist in food production.

While scientists rush to pin down the cause of colony collapse disorder and race to find a cure, engineers have wondered whether we might one day supplement real bees with mechanical ones. Bringing DelFy to greenhouses will take more time and work. Commercial pollinating will also require many such bots operating in an organized fashion, something no group has yet perfected. Lina Zeldovich is a freelance writer in Woodside, N.Y.

You could make it very complicated and calculate the fly’s velocity and direction—or you can use the same kind of simple intelligence they use. G.C.H.E. (Guido) de Croon, Delft University of Technology