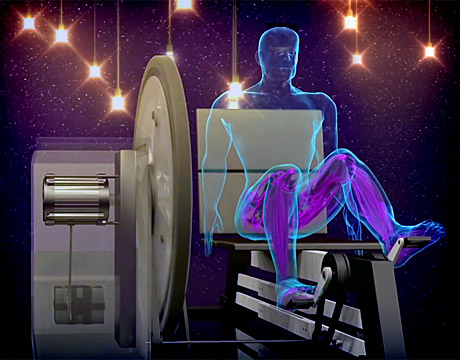 Nearly a quarter of the world’s population has to do without guitar amplifiers, blenders, and hoverboards, to say nothing of computers, refrigerators, and light. There’s no electricity for 1.4 billion of the planet’s residents and intermittent electricity for millions of others. Plugging the juice-starved multitudes into the grid, would be, needless to say, a massive and costly affair. But there may be another way: Let them make the electricity themselves.

Businessman and Princeton dropout Manoj Bhargava has created a human-powered generator that will produce 24 hours of electricity for a single home from an hour of pedaling.

The idea first came to Bhargava, who made his millions selling 5-Hour Energy shots, while he was watching NASCAR on the television. “I saw the same thing millions of viewers see every time they watch one of these races: the car goes into the pit to get a tire change, and a member of the pit crew uses one arm to jack up the car. And the car nearly flips over,” he says. “That gave me an idea: What if we could harness that energy and turn it into electricity?”

Soon after the epiphany, Bhargava got to work. His first stab at human-powered electricity was a hand crank “that failed miserably. It didn't work at all.” So he turned his attention to an already mature piece of human powered technology: the bicycle. To convert pedal power into electricity, he and his engineers developed a massive flywheel that sat to one side of the seat. To balance it, the bike had to have weights on the other side as well. The setup was effective for producing energy, but the cost of making the customized parts, combined with its size and weight, mitigated its usefulness.

So the team threw out the design and went back to that mature piece of technology for inspiration. They tried two wheels this time (standard bicycle wheels) and simply added weights to it. “We used something that was produced by the millions,” says Bhargava. “Doing so reduced the weight of the bike by about 70 percent, and brought down the cost by close to 80 percent.” It also meant that wherever the bike ended up in the world there would likely be a capable repairman nearby. And there was another benefit. “A funny thing happened on the way to making that change: The bike actually became more efficient.”

The result is a generator, called the Free Electric, that can power a rural household running 24 lights and a fan, while charging a phone, for a day, all from an hour’s work by a single individual.

The success of the engineering came not from the high-tech, but from sticking to the goals of simplicity, efficiency, and affordability. “The first version we conceived of about three years ago didn't work at all. So we kept trying things until we found something that did work, and then we tried to make it simpler. And then simpler again,” says Bhargava. “That’s always the question we come back to: How can we make this simpler.”

The end product is simple enough, affordable enough, and efficient enough to interest people that do happen to have access to grid power. Survivalists, exercise enthusiasts hoping to shrink their electric bill, and green-minded energy consumers, will also have a chance to power their homes. Bhargava is creating a second version “with more bells and whistles” for the less than needy. These might include a calorie counter and an iPad stand. “Sales of the second version will subsidize production of the first version,” he says. “We intend that for every bike sold in a rich country, one will be given away to someone in a poor country who needs it.” The cost of one bike falls in the range of $1,200 to $1,500 in the developed world.

The Free Electric will start shipping this year. Before long it may have cleanly and cheaply eradicated energy poverty.

For Further Discussion
The first version we conceived of about three years ago didn't work at all. So we kept trying things until we found something that did work—and then we tried to make it simpler. And then simpler again.Manoj Bhargava, Founder, Stage2Innovations