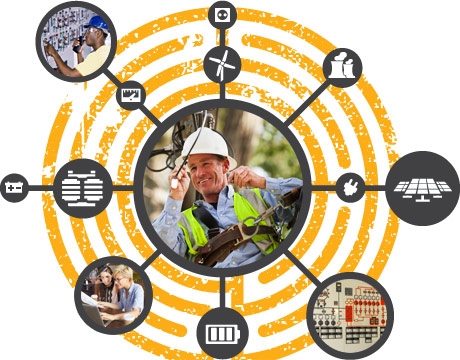 There have been a great many smart people promoting the smart grid, or the transformation of the nation’s electric grid into one that anticipates and interacts with user demand. Over the past six years, a combination of utilities, industries, and the federal government actually put together the nation’s largest smart grid, a demonstration project in the Pacific Northwest. The fledgling system, a two-way interactive model to better connect energy providers and users, sprawled over five states as a dozen participating utilities integrated a wealth of new equipment and technologies including smart meters and transformers, batteries and even controllable thermostats. But its backbone, and what researchers say is key to further development, is a new signaling and communication system called transactive control that facilitated and coordinated the needs of the network.

The five-year, $178-million Pacific Northwest Smart Grid Demonstration Project centered on development of transactive control, conceived by Battelle-led Pacific Northwest National Laboratory. Its development of a two-way interactive smart grid is being bolstered with a slug of federal research dollars aimed at establishing a comprehensive research and development effort anchored by the National Laboratories and the Department of Energy. The Bonneville Power Administration shared responsibility of the grid demonstration with Battelle.

Transactive control is an automated system that connects energy providers and users, constantly exchanging information on the availability of power and price. For the demonstration, signals were sent every five minutes using information on bulk generation including hydropower, wind and thermal power. Utilities could then send the signals to “assets” or smart equipment such as electric hot water heaters, smart meters, or grid-scale batteries. When the transactive signals predicted peak power demand and corresponding high-energy costs, the project’s smart grid technologies responded by reducing power use and lowering demand. Mostly.

While project participants are happy with results, they point to some glitches and areas needing further work. First, better tools are needed to ensure data is of high quality and the equipment generating data works correctly. Many participants were not prepared to deal with the quantity of data generated and sometimes mislabeled it, according to the project’s final report.

“It was evident to us that utilities are having challenges in the introduction of data-rich technology into their systems,” says Ron Melton, who led the demonstration for Battelle. “There was a lot of noise in the data. There is a need within industry for better tools to operate equipment with all of these sensors. We just don’t have the tools now to do that well.”

“One of the challenges most utilities face is that they run with very thin staffs,” says Melton. “Vendors need to make it easy to do these things.”

As an example, Melton points to Portland General Electric’s installation of a 5-MW, 1.25-MWh battery, estimated to save the utility up to $146,000 annually by providing an alternative power source during periods of peak power demand, up to 300 times per year. Melton says the battery and inverters were purchased from different vendors and took the utility about ten times longer to assemble and complete than expected. “There are not well-developed interoperability standards,” he says.

Further, smart grid technologies need to mature and stabilize for deployment to proceed. The report noted that some equipment manufacturers went out of business during the five-year demonstration, which ended in late 2014. Some equipment simply failed.

Finally, officials say public involvement is key to a successful smart grid. For instance, Flathead Electric Cooperative, a Montana utility, started its Peak Time program, offering to install water heaters and equipment in residences that help reduce peak time costs. Users obtained a monthly credit and the equipment was installed at no cost to the owner.

During the project, utilities and customers installed $80 million in smart grid equipment. Fifty-five different technologies were evaluated, many showing they can reduce energy use and cut power bills. Besides Portland General Electric’s 5-MW lithium ion battery, the utility connected to a local solar project and installed new controls to build a micro grid. Nearby customers now can voluntarily reduce power usage and avoid times of peak power demand.

Avista Utilities installed smart meters with remote capabilities allowing it to start and stop electric service in Pullman, WA. The utility claims the meters could eliminate more than 2,000 service calls per year and save $235,000 annually.

The University of Washington in Seattle upped the number of electricity meters monitoring the flow of power to its main campus of some 250 buildings from seven to 200. The new meters give managers a much more granular view of how energy is used and where it is needed.

In the Northwest, wind is the most abundant renewable energy source. The modeling showed transactive energy controls can lower the region’s overall costs by integrating it into the system when it is “abundant and inexpensive.”

“One of the challenges in applying transactive control technology is integrating numbers of different devices. There is a need to interface with various devices, and now it is largely done by hand,” says Melton. “We still need to develop custom interfaces with existing battery storage or SCADA, for example. That takes a fair amount of effort. There’s a need for better operability standards.”

For the next step, DOE through its Grid Modernization Laboratory Consortium, in January awarded $220 million to national laboratories for another string of grid research projects. Among them, PNNL will create a new grid architecture to determine how each part of the grid affects others. Separately, it will develop protocols to test how distributed smart devices can help balance supply and demand to maintain the frequency and voltage required for grid stability.

For Further Discussion
There was a lot of noise in the data. There is a need within industry for better tools to operate equipment with all of these sensors. We just don’t have the tools now to do that well.Ron Melton, Battelle