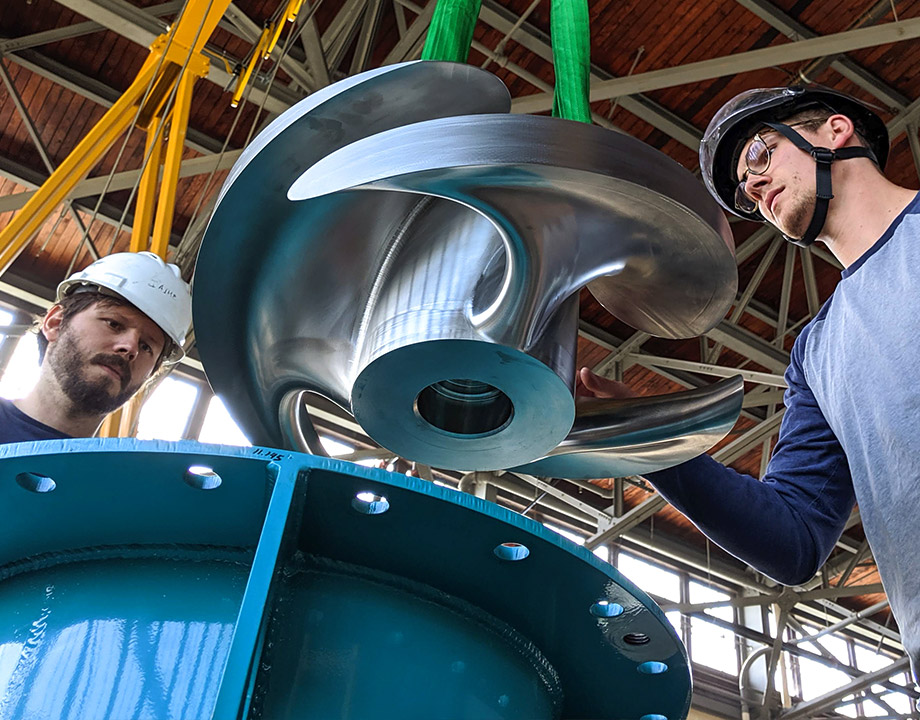 Electric Power Energy
Fish and lakes go together naturally, but those same fish stand in the way of fully harnessing one of America’s largest renewable power resources—small hydroelectric dams. The solution may be an innovative hydroelectric turbine that lets fish swim through it unharmed.

The potential for hydroelectric power from small dams—15 feet or higher—is vast. A 2012 U.S. Department of Energy study, An Assessment of Energy Potential at Non-Powered Dams in the United States, identified 54,000 non-powered dams that could provide 13 gigawatts of capacity. That is enough to power 5 million homes.

Small hydroelectric projects also make sense for river restoration, which use small dams to renew degraded waterway environments. There are also many existing small hydropower dams whose licenses are coming up for renewal.

All of them face a fish problem, said Abe Schneider, president and chief technology officer of Natel Energy, which is developing fish-safe turbines.

One impediment to launching these small hydroelectric projects is that regulators “are showing increasing sensitivity to fisheries,” he said.

“Some existing projects have to shut off their turbines to allow eels to pass at night,” Schneider said. “Others have to install spillways and other paths [for fish to pass through the dam], and that is lost revenue because it reduces the water flowing to the turbines.”

Dams most often install screens to block larger fish from entering the danger zone near the turbines, he added. Leaves and debris can block these screens and reduce flow without constant maintenance. They also add about $1,000/kW in capital costs, Schneider said.

Even then, small fish can swim through a standard 5-centimeter screen diameter. 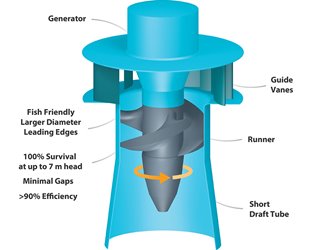 The fish-safe blunt leading edges and forward taper are clearly visible on this representation of a Natel turbine. Photo: Natel Energy
“You can expect 100 percent mortality for fish 20 centimeters long if struck by the leading edge of a rotating blade 10 millimeters thick,” Schneider said. That is the size of the blades for the conventional compact 1-MW turbines found on dams with 5 to 7 meters of head.

The expense of keeping out fish is high as it stalls or stops many small hydro projects since the solutions are so expensive. It is enough of a problem that the Electric Power Research Institute commissioned Alden Labs, a fluid engineering firm, study the problem.

They found that fish do not notice spinning turbines. Once in them, the turbine accelerates the fish. When the thin turbine blades strike them, they break the fish’s spines.

Dams builders can add spillways or screens to keep fish out, but they are expensive at a time when dams must compete with gas and other renewable energy resources. A third option is even worse: Alden found they could slow their turbines to 5 m/sec, but that is too slow to produce power economically.

Natel Energy takes a different approach. Instead of diverting or excluding fish, it has developed a system that will allow fish up to 20 cm long to swim safely through it.

Recommended for You: Introducing the World's Most Powerful Tidal Turbine 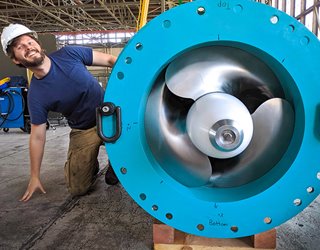 Natel senior engineer Rodrigo Linares in front of a runner installed in a turbine. Photo: Natel Energy
That is quite a turnaround for the firm, which was originally founded to commercialize Pelton turbines for small hydroelectric projects. They were based on Pelton wheels, often found in very tall dams, which use cup-shaped ends to capture the impulse of moving water. Natel’s design for smaller dams turned that wheel into an oval dual-track system. Still, proving a new technology to the very conservative power industry would have taken years.

Then, one year ago, company CEO Gia Schneider (Abe’s sister) discovered river restoration, which has attracted government funding and large companies. The firm switched gears and applying the knowledge it gained to the new task.

The firm also discovered that Alden’s analysis of fish deaths also contained some suggestions on how to solve the problem: thicker turbine blades.

“You need to increase blade thickness relative to the length of the fish,” Schneider said. “That way, when the blade strikes, the fish can curve to match the leading edge of the blade. You want to create a blade curvature to match the curvature of fish’s spine.

“The blades also have a forward slant, which tends to produce glancing rather than direct blows.”

The blunt edge is five to 10 times thicker than other small turbines, but it is not as inefficient as it seems. This is due to two reasons.

“The analogy I use is a school bus, with a flat front, like a sheet of plywood,” he said. The plywood has a lot of resistance, but the bus has much less at the same speed because of its length. As the flow release from the front of the bus, it creates a laminar flow along the length and less turbulence on the trailing edge.”

The second reason is that hydroturbines run at constant speeds. Once the blunt edge accelerates to speed, it remains there without any of the stopping or starting that would create drag.

The design has two other advantages. The blade must run at a safe speed to prevent blows that might kill fish through internal hemorrhaging. That is only 7 to 10 m/sec, but it is still faster than the safe fish speed limit on conventional turbines. This enables Natel to reduce the size and cost of the turbine relative to those models, Schneider said.

Also, as speed declines, so does cavitation, air bubbles in the water created by high speeds. The collapse of cavitation bubbles on turbine surfaces causes pitting, which opens the metal to attack from silt and other aggressive materials in the water.

Natel chose Alden to test its design. Initial data showed that at 5 m head, 100 percent of 20 cm fish passed safely through the turbine. At 10 m head, 98 percent went safely through. That is close to Natel’s design goals and roughly as good as a fish spillway.

The company sees opportunities in new turbines and plant modernizations. It is looking for commercialization partners and wants to work with existing turbine manufacturers to scale the technology globally.