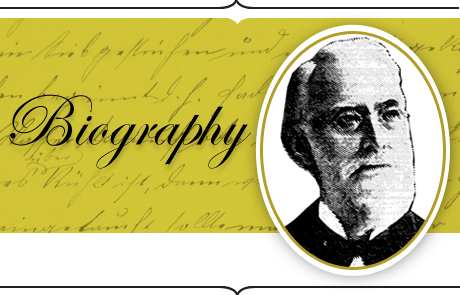 Very little is known about the early life of Lester Allan Pelton, who was born in 1829 in Vermilion, OH. Caught up by gold fever and eager for adventure, he left Ohio in 1850 for California to strike it rich. After discovering mining was much more difficult than he had imagined, Pelton found other work, including wood milling, carpentry, and selling fish he caught in the Sacramento River.

Pelton never strayed far from the gold camps. In 1860 he settled in Camptonville, along the Yuba River, a hotbed of placer mining activity. Here he worked as a carpenter and often traveled to the mining operations, where he studied the equipment and processes with an inventor's eye.

Steam heat was used to power most of the mining. Pelton noticed the huge amounts of wood that were needed to keep boilers going; miners stripped the forest from the hillsides for miles around. Gathering wood also wasted an incredible amount of time and energy. Although turbine water wheels were in use along bigger rivers, they were ineffective with lower-volume mountain streams.

Always inventive, Pelton experimented with designing a better water wheel. Standard wheels had a row of single cups or buckets. Instead of the jet of water hitting the cups in the center, he designed a wheel with split buckets side by side that could harness the kinetic energy of a small volume of water flowing at high speed. Rather than having the water flow stopped by hitting the center of the cup on a standard wheel and wasting the kinetic energy, the water flow was split and deflected left and right into the dual buckets. This simple idea easily doubled the efficiency of the standard water wheel, raising it from 30-40% to as much as 90%.

Pelton commented that "my invention relates to certain improvements in water wheels of that class which are driven by the momentum of a stream of water delivered into buckets on the periphery of a wheel through a suitable discharge nozzle and under a high pressure . . . The stream of water is divided into two parts by a central ride which directs the current of water into the curved bottoms of the two halves of the bucket, from which it passes out over the flaring or divergent sides of the bucket, so as to escape smoothly and utilize the full reactionary force of the escaping stream, in addition to the direct force of the impinging jet."

This unique design revolutionized the use of turbines in high-energy sites, such as small, fast-running mountain streams. This was made possible because Pelton's wheel was driven by the kinetic energy of the water jet, rather than the pressure of the water hitting the cup (harder to accomplish efficiently in narrow, low-volume waterways).

In the late 1870s Pelton successfully modeled, tested, and manufactured his first turbine wheel. The first operational Pelton wheel was installed at the Mayflower Mine in Nevada City in 1878. In 1895, a 30-foot-diameter wheel was installed at a gold mine in Grass Valley, CA. Pelton's invention transformed the American West by replacing expensive, bulky steam engines at mining and construction sites with low-cost hydroelectric power. By the turn of the century the age of hydroelectric power was flourishing.

Twenty years after forming Pelton Water Wheel Company in San Francisco to meet the growing demand for hydropower and hydroelectricity, Pelton died in 1908 at age 78. Later turbine designs (Turgo, Banki) were based on the Pelton wheel, which is still used today to produce hydroelectric power around the world.