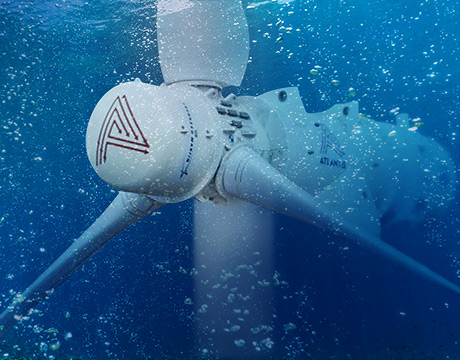 The ocean’s a massive thing. And with that other massive thing, the moon, it creates tides of massive power. If you want a piece of it, you need a massive turbine.

The folks at SIMEC Atlantis Energy have created just that. Their AR2000 will be the largest single rotor tidal turbine that the seas have ever turned.

It is not, however, the largest in size, but in power—it has a maximum output of 2 MW. In fact, it’s the same size as its predecessor, the AR1500, a 1.5-MW turbine. But getting the same power out the same size required some serious engineering ingenuity.

“The approach with this turbine was based on asking ourselves the following question: how do we get more out of what we’ve currently got,” said Nigel Hopley, the company’s mechanical engineering manager. “How much spare capacity is there in the existing design, and then how could we change the control philosophy to increase its power and its annual yield?”

For You: Bacteria-Powered Solar Cells Are Ideal for Cloudy Climates

Thankfully, the AR1500 proved to be plenty rugged.

“There was nothing spared,” Hopley said. “It was, ‘If in doubt, put in a little more provision than you need to’ because the cost of failure was far greater than the cost of being slightly too expensive.”

With the AR1500 at work in the water, the company found that load spikes and fluctuations were not as great as they had predicted. In essence, they’d over designed for rougher waters. “That gave us some extra capacity,” Hopley said.

To ramp all the way to two megawatts, the engineers had to change the way they approached harvesting energy from the tide.

Typically, tidal turbines are designed to run in high sea states at full power until a wave height threshold is reached. Then they shut down. Sticking with such a design philosophy would have meant having to scale up components to create a 2-MW machine. Instead, in situations with high waves and flows the turbine reduces its power setting, which also reduces the loading. These powerful sea states are rare—occurring roughly two or three times a year—so for 98 percent of its life the AR2000 will be set to operate at 2 MW. This small concession allowed SIMEC Atlantis to avoid a larger, more overhauled design.

“It’s an overriding principle to get the most out of what we have rather than scaling up,” Hopley said.

Another major advancement is the ability to hook up multiple turbines and send the electricity they produce back to land through a single cable.

“Others have had individual cables for each turbine, and that is something that changes the turbine a little bit, but has an enormous impact on infrastructure costs,” he said.

Tidal turbines maximize their output by being able to turn with the tides. A tide doesn’t always go out at the same angle that it comes in, so turbines turn to face the full force of the flow. To operate at 2 MW, the AR2000 couldn’t stick with conventional brakes without increasing its size. So they used a new coupling which reacts to torque uniformly, reducing stress and keeping the design compact.

Several AR2000 turbines are likely to join SIMEC Atlantis’s Meygen array (the largest array of tidal turbines in the world) off the north coast of Scotland.

“We are working to have it deployed somewhere around the middle 2020,” Hopley said. “But we don’t have the order yet.”

Subsequently the AR2000 may crop up all over the world. “The addressable tidal market is a moving feast,” he says. “The more we look, the more we find. It may not be as big as wind, but it’s still huge, absolutely massive.”

Michael Abrams is an independent writer

For Further Discussion
The addressable tidal market is a moving feast. The more we look, the more we find. It may not be as big as wind, but it’s still huge, absolutely massive.Nigel Hopley, SIMEC Atlantis Energy