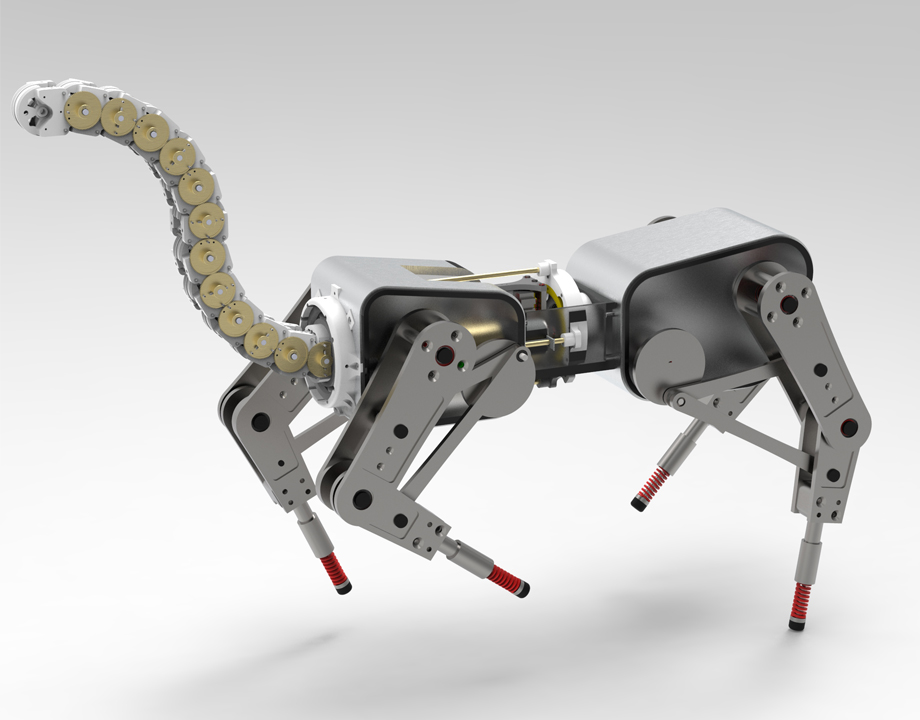 Four-legged robots are now commercially available, but to make them broadly acceptable we may need to add a limb to help them move more naturally. Image: Robotics and Mechatronics Lab, Virginia Tech

Engineers Could Put Tails on Robots

In late 2020, the New York Police Department introduced a new tool for assisting its police officers: a 70-pound, four-legged robot manufactured by Boston Dynamics. The dog-shape robot was designed to climb stairs and use its camera to survey crime scenes for potential dangers, but what garnered public attention—and triggered some alarm—was the unnatural way the robot moved. Its legs moved up and down with understandably mechanical precision while data from gyroscopes fed into the control system to orient the “body.” The reaction led the NYPD to retire the robot dog after a few months, and even the mayor of New York City admitted that the machine was “creepy” and “alienating.”

Engineers for decades have used natural analogues to guide their designs of robots. In addition to Boston Dynamics’s robotic dogs, researchers have built mechanical snakes, fish, insects, and other creatures, while private companies have created many iterations of robots that look somewhat like people. Some technologists believe that quadruped robots have significant advantages over wheeled robots for maneuverability over rough terrain. 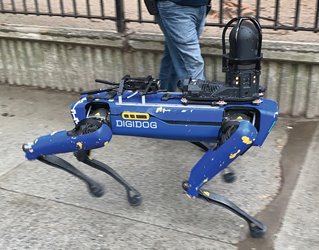 The New York City Police Department drew criticism for deploying a four-legged robot built by Boston Dynamics. Some observers found the robot to be “creepy.” Photo: New York City Police Department
Until recently, though, most of these robots have lacked a feature that is found again and again in nature—a tail. Studies of animal locomotion and robots in the laboratory indicate that leaving out tails has been a design drawback. In fact, research conducted by our lab at Virginia Tech has shown that an articulated robotic tail can effectively maneuver and stabilize a quadruped both for static and dynamic locomotion.

Adding an articulated tail to something like the NYPD’s robot dog might not only make it seem less “creepy,” but also could enable it to move more efficiently and better perform its duties.


Why Tails are Useful


Tails on quadrupeds are used for all sorts of functions auxiliary to the legs. For instance, monkeys use them to grasp branches or to provide balance while walking. Kangaroos often power themselves forward, using their tails as an extra limb. Cheetahs in the wild whip their tails to maneuver at high speed while hunting; by jumping their rear legs in the air and swinging their tail to one side, conservation of momentum pushes the legs to the opposite side to enable fast changes in body orientation.

When researchers first began to study whether adding tails to legged robots would aid in their locomotion, they used the simplest possible abstraction, essentially a stick attached by a pivot to the chassis. And it worked. Although simple, these robotic tails show their effectiveness in mobile robot locomotion, such as helping the robot adjust its airborne orientation, and helped validate some of the hypotheses of how animals use tails. 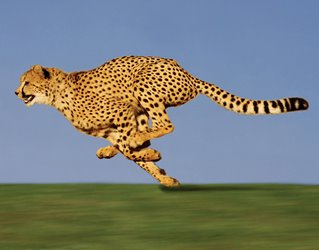 Cheetahs use their tails to change directions at top speed. Photo: Getty Images
But most quadrupeds don’t have such simple tails. Instead, most animal tails are evolutionary extensions of the spine and have multiple links, each made from a caudal vertebra. This implies that there must be some advantage to this sort of tail, since a multi-link limb consumes more energy to operate and many animals have the ability to evolve long, rigid structures, such as the deer’s antlers or the tail fins on a fish. Moreover, apart from some obvious but specialized uses, such as the prehensile, grasping tail of a monkey, there must be a generalized advantage for articulated tails to be seen in many different species.

Attaching multi-link tails to robots could help researchers learn what those advantages are. Research in this area would benefit both biology (for providing evidence for the tail hypotheses) and engineering, since any advantages to adding tails to quadruped robots would enhance their agility and versatility.

In fact, experiments performed in our lab using a multi-link tail have demonstrated a 53-percent increase in the generated moment for bending in comparison to a pendulum tail.

Another reason for adopting an articulated tail structure in nature is from a control consideration, which might not be as obvious as the dynamic analysis at the first sight. However, this is critical for control algorithm implementation. Based on control theory to fully control the torso orientation when the quadruped is airborne, at least three independent inputs from the tail are required, which make pendulum tails with less than three degrees of freedom impractical.

One disadvantage that arises from the perspective of a robot designer is that pendulum tails with universal joints suffer from singularity or gimbal lock when reaching 90° rotation, which further causes temporary controllability loss. Multi-link tails inherently avoid these sorts of problems due to their smaller range of motion for each joint. For instance, some multi-link tails used in laboratory settings can easily reach 135° bending position without encountering any singularity.


To develop an animal-like articulated robotic tail, the most obvious and simplest approach is to directly mimic an animal’s tail structure, referred to as biomimetics. Our Robotics and Mechatronics Lab at Virginia Tech has developed a series of these, using universal joints as linkages and driving them either through flexible cables or via rigid transmission mechanisms. Each has its advantages: Rigid transmission can respond faster and achieve higher speeds, but the cable-driven ones have more degrees of freedom and can potentially be compliant to structures the way an animal’s tail is. 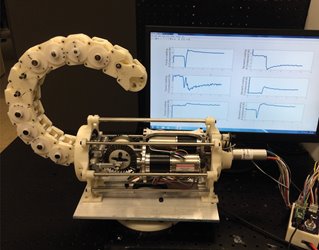 An experimental setup for testing the R3RT device, which has separate systems for curling and rotating the tail. Photo: Robotics and Mechatronics Lab, Virginia Tech
Directly mimicking the structure found in nature may be the most straightforward approach for developing animal-like devices, but it may not be the most efficient or effective way for engineering implementation. For instance, when engineers were designing the first aircraft, they were certainly motivated by birds and other flying creatures. Eventually, though, they evolved their designs to use the logic and laws of physics. There is nothing like a fixed-wing plane with a gas turbine in nature.

This approach, usually referred to as bioinspiration, takes advantage of the basic principle, idea, or functionality of natural creations but synthesizes the hardware or implements the method based on realistic engineering considerations. For instance, pendulum tails are bioinspired since they are mainly mimicking the dynamics of an animal’s tail rather than its exact morphology.

One of them uses an actuator to drive a cable and pulley system to curl the tail while a separate system rotates the tail at the base. A revised version uses gears to couple adjacent links instead of driving each joint directly from centralized actuators; this tail also has two segments, so that it can produce S-shapes. This tail, known as Roll-Revolute-Revolute Robotic Tail (R3RT), has such an effective design and relatively robust hardware that we use it as the benchmark device for experiments on articulated tails.

Frontiers of Robotics: Grasping the Basics and the Promise of Adaptive Gripping

For instance, we have used the R3RT to study how tails are used to assist locomotion when the ground contact cannot be guaranteed, such as in an unstructured environment with uncertain ground support. In these situations, the legs’ ability to stabilize and maneuver is severely hampered, so integrating a robotic tail on a legged robot would provide a means of influencing the robot dynamics independently of the legs’ ground contact.

Another reason to investigate this is because the inclusion of a tail into the system results in the legged robot having more control inputs to adjust its orientation. Therefore, the leg’s complexity (in terms of number of degrees of freedom) could be significantly reduced. This would enable a new type of robot locomotion where the tail would carry the burden of stabilization and maneuvering while the legs would be primarily responsible for propulsion. This new paradigm of a reduced complexity quadruped would be a significant shift from the traditional locomotion paradigm, such as those used in Boston Dynamics’ Spot dog-shape robot, where the stabilization and maneuvering are achieved by planning proper leg motions.

Selected for You: Seven Big Advances in Soft Robotic Grippers

In the lab, we didn’t yet connect the tail to an actual robot, instead feeding sensor data from the tail into a software model of a quadruped whose legs had only two degrees of freedom. (Basically, the legs moved at the hips and bent at the knee and ankles.) We simulated a case where the robot would jump in the air and swing its tail to reorient its body, as does a cheetah. In another test, the tail rolled from side to side in order to help the robot regain its balance. In both instances, we were able to show that the tail should be able to allow a robot with very simple legs to perform complex maneuvering, though obviously those results need to be validated in physical experiments.

Those experiments were static; the simulated robot was not walking. We have also conducted some experiments with a simulation of an even more simplified quadruped, one using the Bioinspired One-degree-of-freedom Leg for Trotting (BOLT) which we have developed. We have data from a physical model of the leg and used that to simulate a model of a reduced complexity quadruped. Now, we have modeled dynamic motion with a pendulum-style tail rather than an articulated one, but even such a limited tail was able to provide stability as the robot ran with a bounding gait and enable a (somewhat) graceful landing when airborne. It’s expected that a fully articulated tail would perform even better, since such a tail would be able to control all the three torso motions—the yaw, pitch, and roll motions—which a pendulum tail cannot do.


This research is promising, but there is still a long way to go to completely decode the advantage of tails on animals—and for robots. However, for the impending future, there are certain foreseeable concrete tasks that we plan to do. The first task is to improve the robotic tail hardware to make it more reliable and efficient. The second is to build the quadruped robot hardware and to develop dynamic locomotion algorithms for the R3RT case. 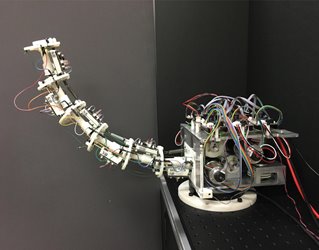 Simplified tails may not provide all the capability of the ones evolved in nature, but they are easier to study. Photo: Robotics and Mechatronics Lab, Virginia Tech
So far, the choice of the reduced complexity quadruped is mainly based on engineering considerations. Performing a study that involves the incorporation of an articulated robotic tail on a general legged platform (without reducing leg complexity) as a complete coupled physical system will, of course, be the ultimate test. Only then will we be able to qualitatively and quantitatively measure the tail’s effectiveness in providing a legged robot with effective maneuvering and stabilization functions, since such a setup is closer to the natural observations seen in animals.

If tails do provide an advantage in mobility, then it seems likely that they will help robots walk and run in a way that seems more natural to people. Rather than the machine-like steps of the NYPD’s robotic dog, future robots may be able to move in ways that seem less alienating and more inviting.