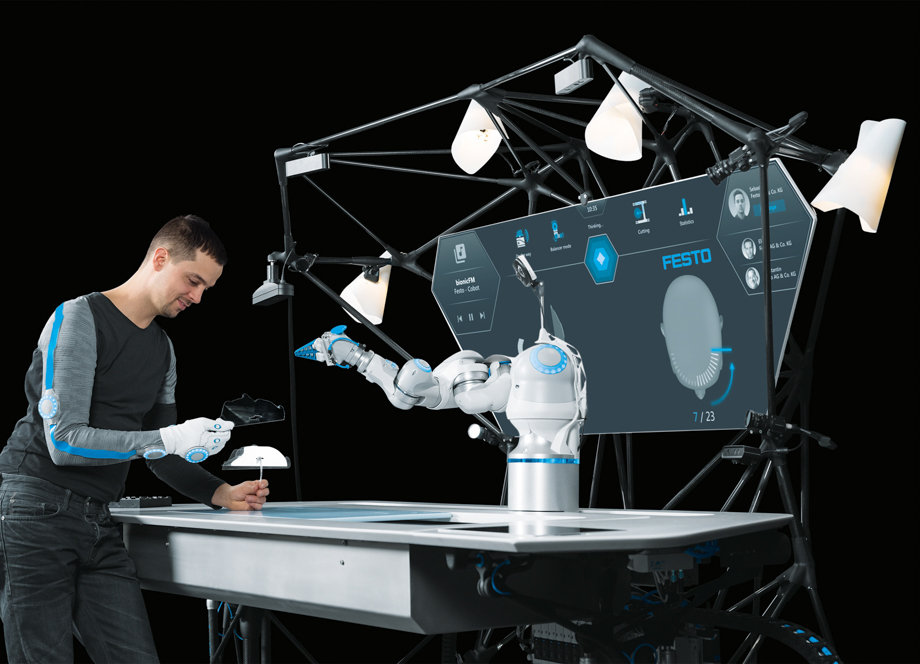 The most remarkable area of exploration into the future of adaptive gripping will be simulating the dexterity of the human hand. Photo: Festo

Grasping the Basics and the Promise of Adaptive Gripping

by Mike Guelker and Cory Knight

A decade ago, the three most common types of industrial grippers were parallel, three-finger, and angled. Parallel grippers, the most frequently applied, do just what their name implies — two slides either close parallel to the workpiece to grip its outside edges or open out to put pressure on inside walls. Three-finger grippers are used to center the workpiece between the fingers, which are offset by various angles. The three fingers slide the workpiece to the gripper’s center, holding the workpiece snugly. The angled gripper variation is the radial gripper: The fingers open a full 180˚, useful where vertical space is limited. Fully open radial fingers can rest just above or below the workpiece and close when positioned.

Just about a decade ago, a new class of adaptive grippers was on the horizon. One Festo design, a biomimicry-based gripper derived from a fish’s tail fin configuration, featured soft “fish-fin” gripper fingers that gently wrapped around and adapted to different shapes. During the next 10 years, the most exciting advancements in grasping would be adaptive.


Mention adaptive grippers to anyone in manufacturing or assembly today, and likely their first response will be to say adaptive grippers are being developed for collaborative robotics. They would be correct, but only partially. The collaborative segment is driving interest in adaptive grasping, but just as important are other industries driving development where the scarcity or cost of labor, the need for greater flexibility and speed, and small lot sizes are stimulating interest in automated solutions. 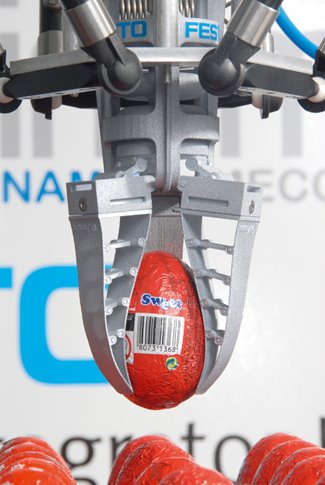 The novel adaptive gripper is based on the design of a fish’s tail fin. Here the soft fingers are gripping a chocolate egg without breaking the delicate confection. Photo: Festo
For example, dairy farming is a labor-intensive agricultural business with low margins and a shortage of workers. Due to technological advancements, there is a trend toward dairy farms incorporating robotic milking barns where cows enter the barn, and the milking robot does the rest. Robotic milking barns based on the latest control, motion, and adaptive gripping technologies have ameliorated labor costs concerns and made those farms more competitive. Overall yield is more consistent, and herd management improved with these automated, basically operator-free systems.

In the baked goods industry, soft-adaptive end effectors for delta and other robotic configurations, including gantries, gently grasp loaves of bread and muffins. Many times, these flexible robotic systems can pack mixed assortments to conform to each customer’s order.

You May Also Like: Automating the Risk Out of Farming

In the confection and fruit and vegetable industries, soft-adaptive grippers are being applied as end-of-arm tooling for sorting and packing. Adaptive grippers, for example, can pack produce tightly for multi-packs of sweet corn, peppers, and other crops. Work is underway on multiple fronts to develop cost-effective agricultural robots equipped with adaptive grippers for harvesting soft fruits and easily bruised vegetables.

And where hard-sided, vacuum, and magnetic grippers are most prevalent, such as auto manufacturing, adaptive grippers pick and place round and semi-round components such as cams and shafts.

While adaptive grippers and robotics have not been generally applied in the meatpacking industry, can automation be far behind given the vulnerabilities so recently exposed during the pandemic? The fast-food industry is also a possible candidate for automation and adaptive gripping technology.

Adaptive grippers are ideal not only for grasping delicate/easily damaged products or materials, but also for sorting items in a jumbled orientation, such as automobile parts in a bin or apples in a crate. A single gripper can be suitable for multiple sizes and shaped objects such as those found in high volume distribution centers and, as noted above, meatpacking plants. Adaptive grippers can be used in cleanrooms and food plants because they are constructed of materials that meet clean and sanitary requirements. In terms of engineering overhead, adaptive grippers are easy to program because they offer more motion forgiveness – less precision required – and are therefore faster and simpler to apply. 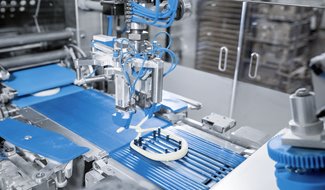 Adaptive grippers in this bakery are used to grasp dough in a high-speed pretzel making process. Photo: Festo
For items that are not easily damaged, adaptive grippers with metal or hard plastic hinged fingers can be used for grasping. The pneumatic fingers are made of a flexible elastomer for items that can easily be damaged, such as produce or baked goods. Elastomeric grippers can have flexible zones and non-flexible zones. When pressurized, the flexible zones inflate and “flex” around the nonflexible zones, creating a nonmechanical hinge. Elastomeric fingers do not damage an item because both the elastomer and compressed air provide “give” when in contact with an object and thus offer a built-in cushioning effect. This inherent damping causes less shock during the initial grasp, thus making these grippers ideal for baked goods, confections, and fruits and vegetables.

The grasping fingerstyle, both hard and soft, is the most prevalent today in adaptive gripping. There are other styles of adaptive grippers based on unique structures. These include the biomimicry derived chameleon tongue and tentacle design based on octopuses. 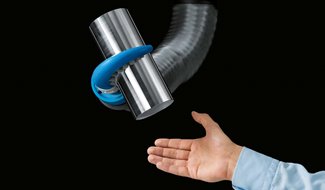 The biomimicry-derived tentacle gripper gently holds this mirror-surface cylinder without marring the cylinder’s finish. Photo: Festo
There are some drawbacks to adaptive grippers. Adaptive gripping solutions typically cost more than nonadaptive grippers., Growing demand, however, causes these types of solutions to become more affordable than ever. They open and close more slowly than comparable stroke conventional grippers. Elastomeric materials wear faster than metal or hard plastic. The size and weight of objects limit what these grasping devices can handle.


Up until this point, except for a few truly novel exceptions like the biomimicry-inspired chameleon tongue and octopus tentacle, all of the adaptive grippers have been variations on parallel, three-sided, and angled-hard gripper theme. Basically, they are combinations of different orientations of grasping fingers with no sensor feedback. The next stage in development will be based on:
Adaptive grippers today are almost entirely used on automated lines and modular assembly stations. The way these grippers are applied may lock people into thinking of robots as stationary devices operating within envelopes of motion. That is changing, and the change is based on advancements made in entirely different fields.

Read Our Infographic: The Electrical Components of the Self-Driving Car

Autonomous vehicle technology focuses on the mastery of the complex process of safely traveling between destinations. Enterprising organizations and individuals are looking at ways to apply autonomous driving technology to other areas. One of these areas will be mobile robotics.

While automated guided vehicles (AGVs) have been around for decades, the new devices based on autonomous vehicle technology will improve the vehicle’s ability to move flexibly and interact safely with humans. It is not hard to imagine applying this next generation of mobile robots for package pick-and-place at distribution centers and for a number of tasks at hospitals and nursing homes in order to free up orderlies, nurses, and doctors.

Wherever labor costs are going up, or labor is scarce, there will be an opportunity for autonomous automation, either stationary or mobile. There will be a need for adaptive grippers that are flexible and people-friendly in all of those applications.

In the mobile format, elastomeric grippers will be powered by compact, energy-efficient, and self-contained compressed air systems or electrical actuators. Interacting with people will call for grippers with a host of sensing capabilities, especially vision, force, and inertia. Artificial intelligence (AI) will provide task learning, and once one robot in a series learns a task, other robots in the same series will have that knowledge as well.

The greatest area of exploration for the future of adaptive gripping will be simulating the functionality of the human hand. The reason for this is simple. The hand offers the greatest efficiency – one gripper for a wide assortment of tasks. With sensor technology providing feedback, there can be object manipulation, something grasping finger-based grippers cannot do. 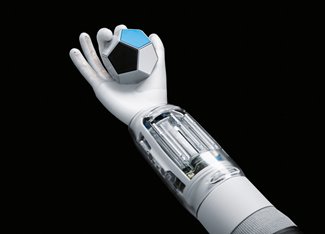 BionicSoftHand points the way to the future of adaptive gripping. This hand is learning how to manipulate a polygon so that a specified color comes out on top. Photo: Festo
The BionicSoftHand is an example of the latest innovations in biomimicry, in terms of an adaptive gripping prototype. The BionicSoftHand controls its movements via the pneumatic structures in its gripper fingers. When the chambers are filled with air, the gripper fingers bend. If the air chambers have been exhausted, the gripper fingers remain stretched. The thumb and index finger are additionally equipped with a swivel module that allows these two gripper fingers to be moved laterally, giving the bionic robot hand a total of twelve degrees of freedom.

The advancements of the BionicSoftHand over pneumatically activated elastomeric grasping fingers include:
By means of artificial intelligence linked to sensors in the bionic hand, the robot hand learns to independently solve gripping and turning tasks similar to how human hands interact with the brain. Hands not only react to the commands of the brain but also simultaneously provide it with important information to adapt further actions to the environment and its requirements.

In automation today, some tasks are too complex to be able to program every movement and function directly. Due to its many degrees of freedom, conventional control strategies are not readily applicable with the BionicSoftHand. To fully exploit its productivity and efficiency potential, it needs to learn on its own how to adapt its behavior and, subsequently, expand its skills.


The Future of Biomimicry Grippers


When the first image of the fin gripper gently grasping a chocolate egg was published a decade ago, engineers were in awe over the simplicity of design and its ability to adapt. And yet, as in so many things ahead of its time, it was not precisely clear how to cost-effectively apply that very cool component. Today some adaptive grippers, including the fin, are basic commodities. Time caught up with these innovations. 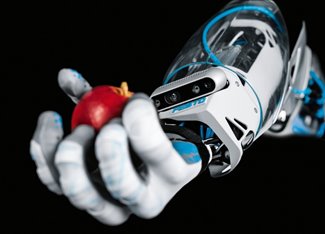 The latest version of the BionicSoftHand. Note vision sensors on the “wrist.” This gripper is mounted on the BionicMobileAssistant. Photo: Festo
The BionicSoftHand with 3D printed “skin” and the application of autonomous vehicle technology to robotics could seem just as gee-whiz to engineers today. But how do you cost effectively apply these prototypes? It may not be possible today.

Shorter product lifecycles, small lot sizes, and labor demographics are accelerating the need for adaptive systems. Perhaps the answer today is not a fully autonomous mobile robot or a fully functioning human-hand simulation, but a gripper with integrated feedback—automatically calculating the ripeness of every vegetable it handles. There are engineers today envisioning the possibilities and beginning to move the industry forward. For an engineer, the opportunities for innovation in this field are endlessly gripping.

Cory Knight is currently an automation engineer and Grip-It! Team lead at Festo, focusing on automation projects in the Food and Beverage and End of Line Packaging industry segments as well as providing expertise for end-of-arm-tooling gripping applications. Cory worked as a machine design engineer for a decade before joining Festo. He has been a member of ASME since 2008.

The authors would like to thank to Prof. Dieter Mankau, Academy of Art and Design, Institute for Technology-Oriented Design Innovations, Offenbach, Germany, for providing his insights into the current and future trends in adaptive gripping. Professor Mankau is one of the world’s leading thinkers on adaptive gripper design.