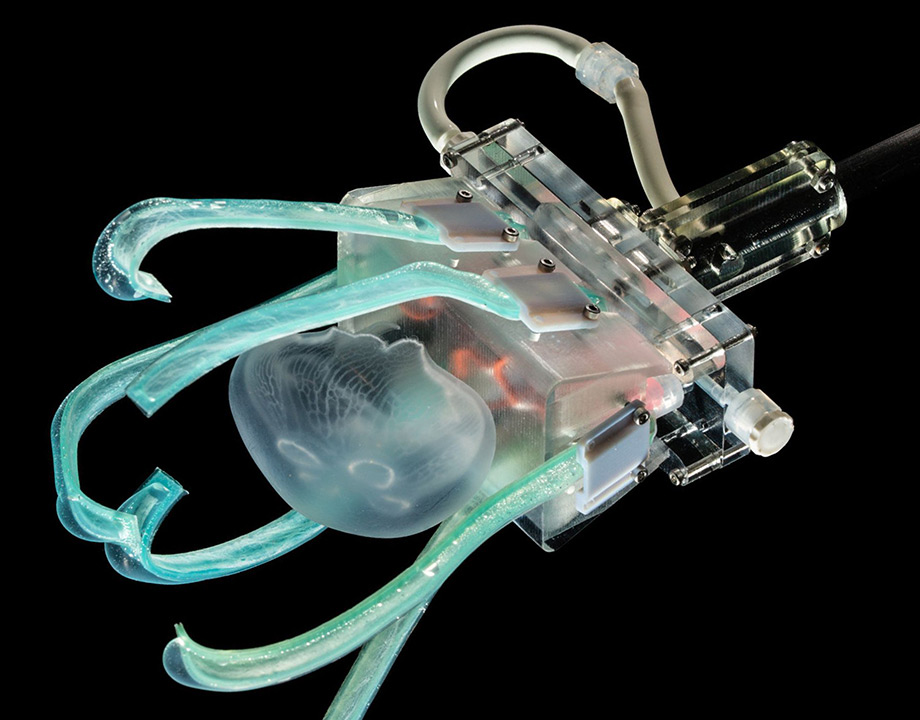 Soft robots have an enormous range of capabilities, from picking objects on an assembly line to softly plucking a jellyfish from the ocean. Photo: Wyss Institute at Harvard University.

Fabricated Metal Product Manufacturing Robotics
Only a few years ago, soft robotic grippers were a laboratory curiosity. Now, they are breaking into the real world. There are sound economic arguments for their success. A single soft gripper could conform to and pick up a wide range of objects, an attractive option for warehouses, food distributors, and factories with a high mix of products.

Soft end-effectors can also handle fragile objects that hard grippers would crush, like glass, bakery items, and even marshmallow treats. Because many soft grippers conform to objects, they are breathtakingly fast when it comes to picking up unstructured items from a line or bin, since they don’t need to spend time calculating and managing a precise approach to each object.

So, let’s take a look at seven of the most interesting soft grippers out there. 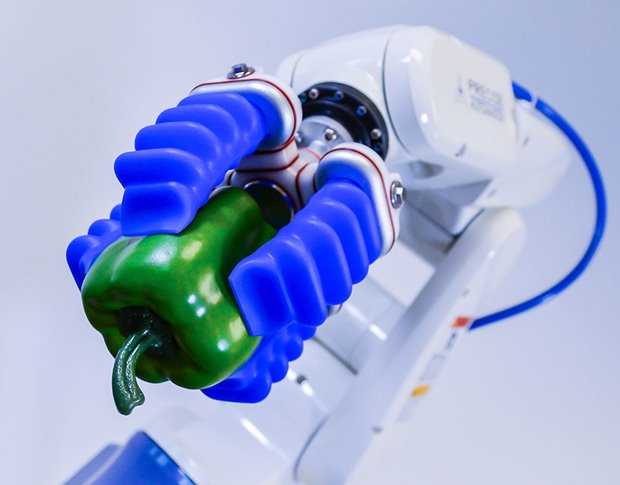 The mGrip soft gripper earned its reputation by picking and placing fragile yellow and pink marshmallow Peeps without damaging them. Photo: Soft Robotics.

The mGrip is the latest iteration of one of the first commercial soft robotic grippers. Launched in 2015, the technology burst onto the scene in 2017 with a video that showed it picking and packaging Peeps, those popular—and easily crushable—pink and yellow marshmallow rabbits and ducks. The device was created by Soft Robotics, a firm founded by soft robot pioneer George Whitesides of Harvard University and investor Carmichael Roberts.

Like many soft grippers, mGrip is made of soft elastomers and pneumatically powered. Yet, its real strength is their construction, which involves engineering the distribution, configuration, and size of a network of parallel air chambers embedded in the elastomer that inflate from a single pneumatic source. This yields a compliant gripper that does not rely on hard linkages, sensors, sophisticated vision systems, or complex numerical positioning computations. Removing these elements reduces complexity and speeds cycle times.

Recommended for You: One Indestructible Bug In a Soft Robotic Body

mGrip can be set up as two-finger opposing and four-or-five-finger circular grippers. A single gripper can pick up a variety of products—from bakery goods to rag dolls to pens—without any tooling changes. Soft Robotics also makes SuperPick for picking structured and unstructured products from bins. 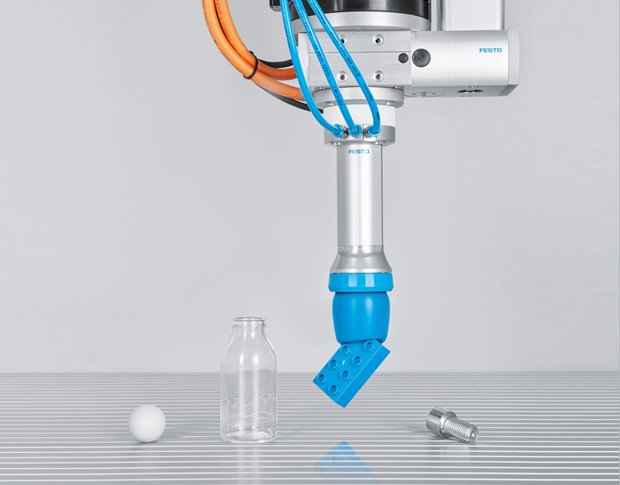 Festo is well known for its fanciful bionic robots and, more recently, its octopus-inspired TentacleGripper, which wraps around objects like an octopus’s arm and then uses vacuum suction cups to hold it firmly in place. Yet Festo’s commercial products make equally ingenious use of biomimicry. Take, for example, it’s DHEF adaptive gripper, which is inspired by the tongue of a chameleon.

Chameleon tongues shoot out to engulf their prey. Festo’s DHEF does something similar using a soft silicone elastomer cap that folds over itself. The device itself consists of a double-acting cylinder running between two chambers. One chamber is filled with compressed air, the other with a silicone cap whose tubular sides are filled with water. A thin rod goes from the cap to the piston. When the cap hits object, the top chamber vents and a spring pulls the piston upwards. This causes the water-filled silicone cap to pull inwards and wrap around the object. The silicone’s static friction then holds it in place.

DHEF fits irregular and round objects up to 38 millimeters in diameter. With no sharp edges, Festo sees application in gripping sensitive objects, such as air nozzles and trim strips. 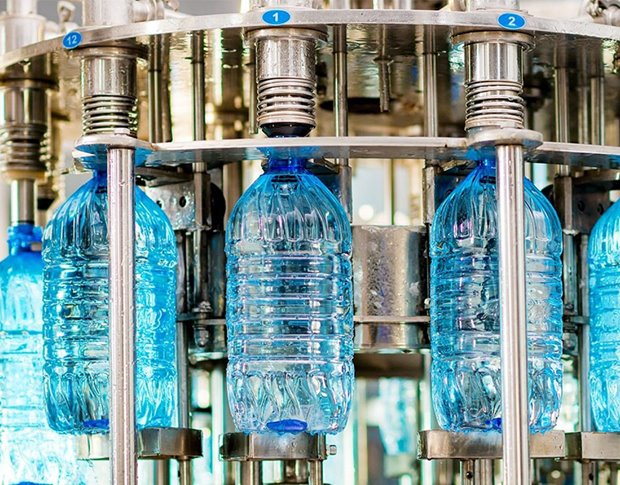 The AirGripper from Firestone Industrial Products, a unit of Bridgestone, combines pneumatic pressure control with the physical attributes of rubber. Think of it as a cylindrical version of an inflatable pneumatic tube encased within a metal shell. When deflated, the cylindrical end-effector fits over an object, such as upright bottles, test tubes, and cylinders. It then inflates inward, squeezing the object in a grip that enables the robot to place it where needed.

While the design is not as flexible as some soft grippers, it can fit over anything with a 5- to 45- millimeter diameter. The larger AirPicker goes up to 105 millimeters. By adjusting pneumatic pressure, the grippers achieve a pliant yet stable grip on delicate parts—even those up to 50 pounds. Because they do not need seals or bearings, they provide good durability in dusty environments, and they do not mar glass and plastic objects. 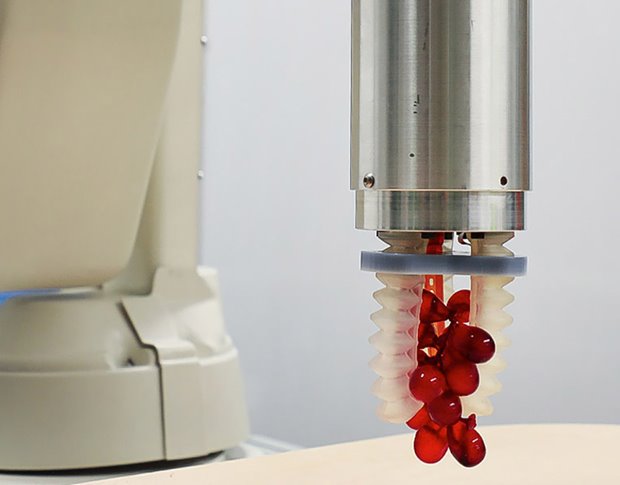 What makes the human hand special? Aside from our four fingers and opposable thumb, human hands have a sophisticated sense of touch and slip. This enables us to adjust the pressure of our grip to hold delicate objects without allowing them to fall out of our hands. Cambridge Consultants’ Hank soft gripper attempts to emulate that using sensors embedded in its individual pneumatic fingers.

Hank’s sensors are embedded while molding its hollow silicone fingers. An air chamber running through the center flexes the finger to apply force, the amount of which is determined by the sensors. This lets Hank do something human hands do well, which is approximate the location of an object and then adjust our fingers and angle of attack to grip it securely. Hank’s sensors provide all the feedback it needs to alter the gripper’s approach to a part and to increase force if the object starts to slip. They also provide instant feedback if the gripper drops an object.

You May Also Like: High-Speed Chameleon Tongue Redefines Soft Robots

According to Cambridge, this is less costly than using vision systems and complex algorithms to calculate the approach with millimeter accuracy. The fingers themselves are low-cost consumables that are easy to replace if damaged or worn. Potential uses lie in agriculture and robotic picking in warehouses filled with small, irregular, and delicate items. 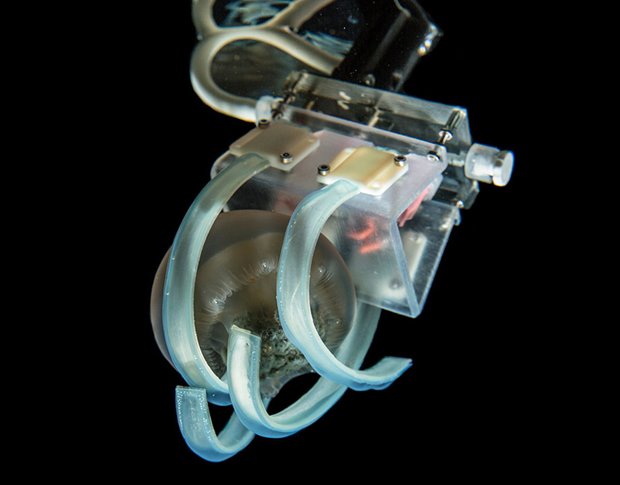 Harvard/CUNY researchers has developed a soft gripper so gentle, it can capture and safely release a jellyfish. Photo: Wyss Institute of Harvard University.

It’s hard to think of something more delicate than a jellyfish, which is about 95 percent water. It would take an unbelievably gentle robotic gripper to pick one. Now, researchers have invented a soft system—it looks a bit like a jellyfish itself—that does just that. The developers include well-known soft roboticist Rob Wood and Nina Sinatra of Harvard University’s Wyss Institute for Biologically Inspired Engineering and David Gruber of Baruch College at the City University of New York (CUNY).

The hydraulically powered device consists of six ultrasoft, fettuccini-like silicone tentacles attached to a 3D-printed plastic “palm.” The inside of each thin tentacles is hollow, but one side is bonded to a layer of stiffer but still flexible nanofibers. When water pressurizes the channel, the tentacles curl around the stiffer nanofiber side. The fingers exert only 0.0455 kilopascals of pressure, more than 20 times less than today’s state-of-the-art soft marine grippers, and produced no visible signs of stress when used on jellyfish. Researchers plan to use the grippers to collect such hard-to-capture organisms as squids, octopuses, sponges, sea whips, and corals for study. 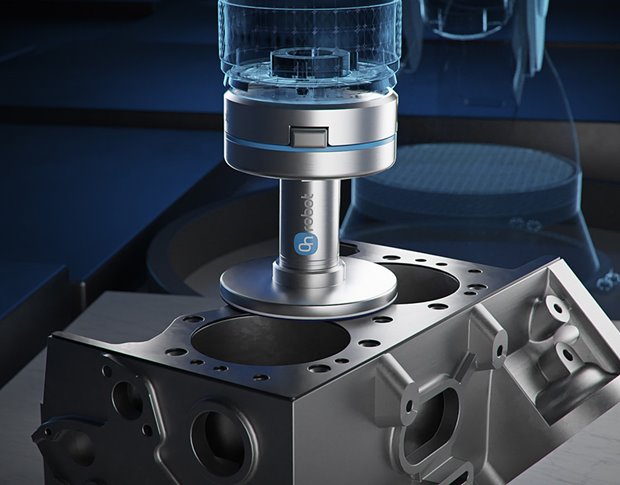 OnRobot’s Gecko Gripper does not exactly look like a soft gripper when you look at it. But if you put it under a microscope, you would see millions of microscale fibrillar stalks that adhere to surfaces the way gecko feet do when they climb a wall. This gives the gripper some very interesting properties. Not only can a standard gripper lift up to 6.5 kilograms, but handle perforated and porous workpieces, such as printed circuit boards and parts with openings, without marring glass or any surface finishes.

So, how does the Gecko Gripper work? The answer has to do with strength in numbers. The microfibers stick to objects the way a gecko’s foot sticks to glass: they use van der Waals forces that involve the electrostatic attraction between molecules. This force is negligible when large objects are placed near each other, but large enough to do some serious lifting when millions of microfibers generate the intermolecular attraction. Originally developed by NASA to retrieve satellites in space, the gripper does not require adhesives or pneumatic power. In fact, OnRobot claims that companies can pay back their gripper within eight months based on savings on electricity for compressed air alone. 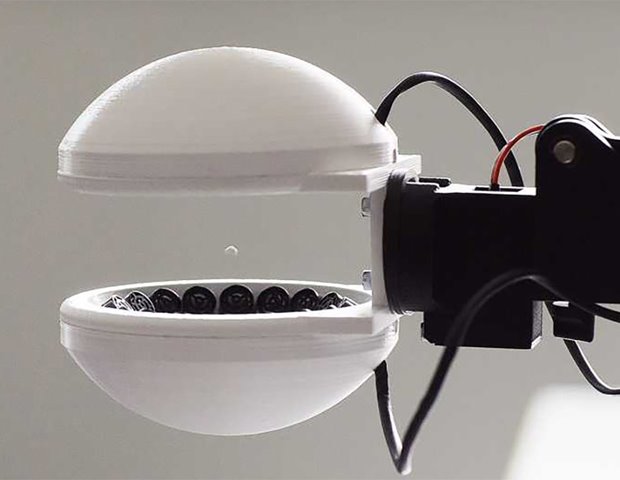 What is softer than the softest soft gripper? How about levitating objects in air? At ETH Zurich, Marcel Schuck, a former Ph.D. student, is using ultrasonic waves to lift and manipulate small objects without touching them. If perfected, this would enable him to handle small, expensive parts, such as tiny watch gears with a thin coat of lubricant that can be damaged by touch, without risking damage or contamination from soft robotic grippers.

Schuck’s test setup involves two opposing 3D-printed dome-like structures, each outfitted with an array of small loudspeakers, and separated from one another. These use ultrasonic waves to generate pressure fields that trap small objects in the space between the two domes. By using software to control the loudspeakers, he can shift the configuration of the acoustic fields to move the objects around. This would enable him to use a robotic arm to move a part to a tool and then use the acoustic grip to precisely position it for automated assembly. He hopes to launch a startup based on the technology in 2021.