It is early morning in Nairobi’s Marikiti food market and as traffic builds, one notices a trail of handcarts loaded with bananas and potatoes as buyers hurry to shift their produce to other parts of Nairobi. The handcarts seem to compete with three-wheeler tuk tuks and ordinary motorbikes both in disorder and noise.

This was the picture that came to the mind of Kenneth Guantai, an electrical engineer and founder of AutoTruck East Africa. Last year, Guantai and colleagues launched an electric tuk tuk as well as an electric handcart ready to clean the mess created by the ordinary loaders in most of East African markets.

For handcart pushers, it is normally a long day of pushing loads across the city, sometimes causing serious accidents, as they try to brake downhill using an improvised braking system made of worn-out tires.

Guantai and his colleagues saw an opportunity to solve a real problem. “We invented a system called regenerative motion recharge system, where it taps motion from the rear wheels and converts it into electric energy and re-charges its battery in motion,” Guantai said.

The charging system is not only used for the electric handcart but also for the tuk tuk. With a charging time of two hours, the battery is able to run for several days without the need for re-charge, giving users enough time to run their businesses. It also carries more passengers and load compared to gasoline-fueled ones. 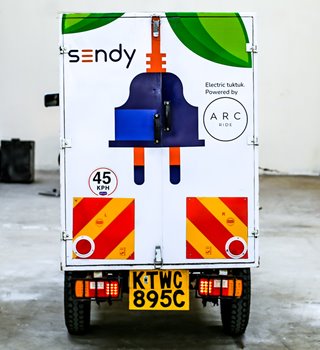 Arc Ride has been conducting research on how to convert the existing fossil-fuel-powered tuk tuks into electric. Photo: Arc Ride
Electric motorcycles and tuk tuks are increasingly finding their place in the East African market with several companies in Uganda, Kenya, and Rwanda racing to supply enough units to serve a growing market.

You May Also Like: Kenya Seeks to Modernize Its Informal Manufacturing Sector

The United Nations Environmental Programme estimates that there are over 1.5 million motorcycles, commonly used as taxis and the number is likely to hit 5 million by 2030. The number of tuk tuks is also high with majority using fossil fuel engines.

In Uganda, a B2B e-commerce startup Sokowatch has partnered with Indian electric tuk-tuk manufacturer Gayam Motor Works to develop electric tuk tuks. The company runs several shops within Kampala and will be using these electric tuk tuks to deliver goods to consumers, reducing the cost as well as ensuring a green output.

When the tuk tuks were launched in Uganda, the CEO of Sokowatch noted that the roll-out would help Kampala’s air quality that’s been considered poor.

With the same idea of reducing air pollution and noise, Arc Ride, with a presence in Rwanda and Kenya, has been conducting research on how to convert the existing fossil-fuel-powered tuk tuks into electric.

The company aims to reduce emissions and pollution in African cities by converting all 3,000,000 taxis in East Africa to electric, saving approximately 12,540,000 tonne of carbon dioxide per year.

Taxi-hailing app Bolt also announced that it will be rolling out electric tuk tuks to be used on its Bolt- Food section for home delivery. The company is also considering using them later as taxis.

The World Economic Forum estimates that the volume of delivery vehicles in the top 100 cities in the world will rise by 36 per cent by 2030 and for this to work perfectly, there will be need to increase the number of electric delivery cars.

“From the undeniably growing upper hand of electric tuk-tuks over the fossil-powered rickshaws, I can attest that they are the future of urban mobility. Not only do they use clean energy lowering the carbon footprint, but they are also silent compared to the diesel-powered rickshaws,” said Magdalene Nziva Maluta, technical specialist, at Arc Ride.