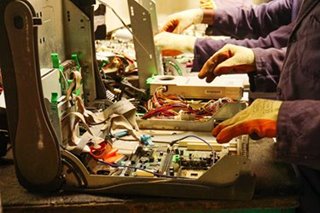 Computer and Electronics Manufacturing Materials Primary Metal Manufacturing Technology and Society Waste Management Services
In the sprawling Embakasi industrial zone of Nairobi, Kenya, Bonnie Mbithi leads a team of local experts who collect, recycle, and ship out used computers and other forms of electronics waste. For eight years, a social enterprise known as the Waste Electrical and Electronic Equipment Centre (WEEE Centre) has been the shining light in exploiting e-waste in Africa.

The center can handle 200 metric tons of waste per month. However, due to low awareness among the public and almost non-existent laws and regulations encouraging people to recycle their used computers and phones, they are managing 35 to 50 tons a month. In all of Kenya, less than 10 percent of electronic waste generated in the country is managed properly, which leaves more than 52,000 tons lying in dumpsites, empty yards, and even rivers.

Since 2014, the global generation of electronics waste has grown by 9.2 million metric ton, according to the World Economic Forum (WEF). While this remains a challenge for many countries both in the developing and developed world, proponents of circular economy believe they can exploit the multi-billion-dollar economy. 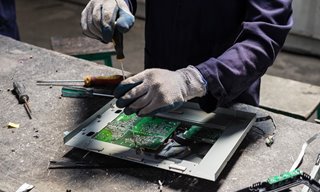 Computers are disassembled, and components and metals are separated from the motherboard. Photo: WEEE Centre.
In a recent report, Five Big Bets for the Circular Economy in Africa, the WEF listed recycling of e-waste as one of the five new industries in Africa that could pose the biggest opportunities for increased circularity in sectors that will support the economy, jobs, and the environment.

The e-waste figures for Kenya are disappointing, but the country seems to be doing much better compared to most of the African nations, which barely have any entities involved in e-waste exploitation. In Ghana, for instance, more than 150,000 second-hand electronics devices are imported each year, adding to locally produced e-waste. Nigeria receives more than 60,000 metric tons of used electronics and electrical equipment from other countries through Lagos ports. More than 25 percent of this e-waste is classified as “dead on arrival”, according to the WEF.

More on Recycling: How Are Robots Helping Us to Recycle Better

This waste does represent an opportunity. The WEEE Centre in Nairobi sorts all manner of e-waste. Devices which are not fully dysfunctional are donated to schools and parts can be repurposed for other home use. The rest is exported to countries that can extract special metals.

Mbithi believes Africa is only scratching the surface when it comes to urban mining, the art of collecting special metals from computer processors and motherboards.

“In Africa, the extraction of these metals is up to $10 billion, and this is the amount we are losing,” he said. “By urban mining, then you don't need to do the real mining because countries can extract the same materials safely.”

Mbithi believes there is a need to integrate culture and laws that would promote a carrot-and-stick approach to encourage users to recycle their e-waste. 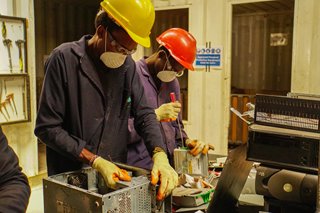 Two men work to harvest materials from electronics waste. Materials that can be recycled include aluminum, plastic housings, metal casings, and batteries. Photo: WEEE Centre.
“For the carrot, they can exchange their old electronic equipment for a small token, for example, a discount on the next gadget. For the stick, laws need to be set for punitive measures for irresponsible disposal of waste,” he said.

He sees Kenya as a forerunner in both the circular economy and e-waste management as the country crawls towards distinct laws that will guide the sector and localize international statutes that guide how e-waste is managed.

Recently, there was uproar when many tons of waste, mainly plastics and electronics from developed countries, were intercepted on their way to Kenya. Mbithi however thinks such would be an opportunity if the laws governing recycling were in place.

“I do not see a problem with this so long as it is not ‘waste colonization,’ as guided by international conventions limiting the dumping of waste in developing countries,” he said. “Countries like Sweden import waste for recycling. This can support a whole industry that can create jobs and opportunities. Waste becomes waste when creativity stops.”