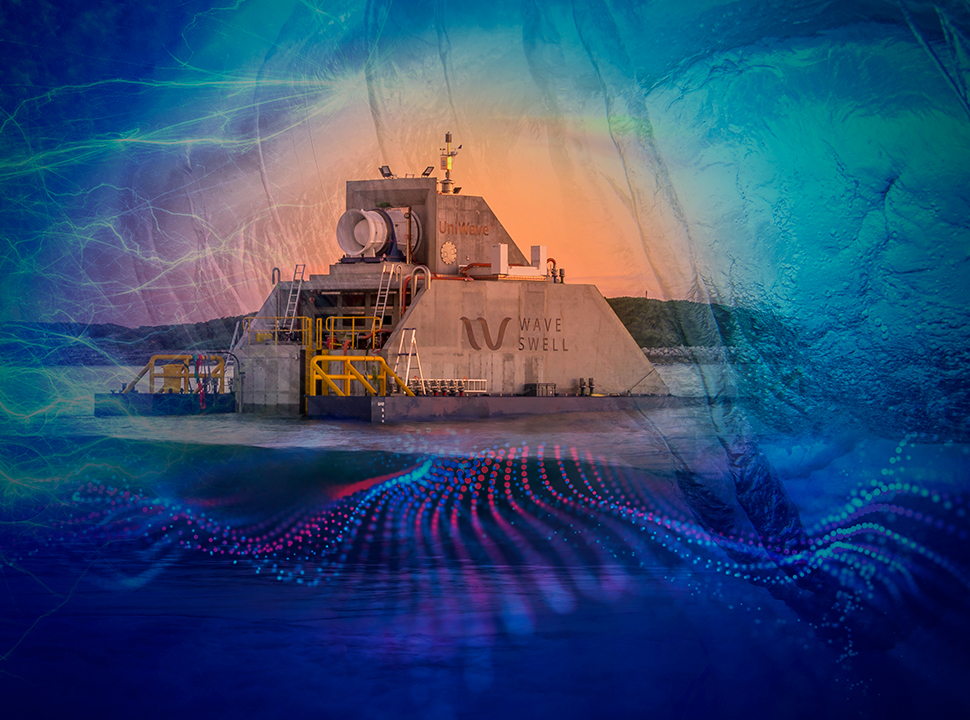 A wave-powered oscillating column has been sending electricity to King Island for a year.

Blowhole Power on the Rise

“The concept is very simple: it’s an artificial blowhole with a turbine,” said Scott Hunter. Hunter is the chief technology officer for Wave Swell Energy, and the blowhole he’s talking about is a concrete hulk of a structure off the coast of King Island, situated between Tasmania and Australia’s mainland. It’s just completed a year of steadily turning waves into electricity.

Wave Swell is not, of course, the first group of engineers to try to harness the power of the rise and fall of the ocean. But, typically, oscillating column designs like Wave Swell’s operate like a piston—as waves go up and down inside the structure, they drive a turbine in both directions. Rising waves push air through a turbine, and receding waves pull air back through the turbine. 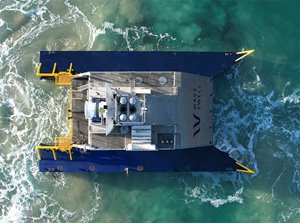 Over two years, Wave Swell has built a 200-kilowatt blowhole with a turbine.
But two-way turbines are a complication that made previous attempts finicky and prohibitively expensive. “In 2016 we had a bit of a light bulb idea—the uni-directional oscillating column,” said Hunter.

To force the flow of air through to pass through the turbine in one direction only, Hunter and his colleagues added a set of valves—simple rubber flaps that open when a wave hits and close when a wave is falling, sucking air through the turbine as they do so. Though the turbine is only moving half the time, it’s still getting the lion’s share of potential power as the energy of oncoming waves is essentially stored in the concrete column. And the simplicity of the design makes it more efficient than bi-directional oscillating columns.

To keep the flow of electricity from the concrete blowhole to the people on King Island more regular than waves, they’ve added armoire-sized circuit capacitors. “That means we can supply a smooth source of energy to the grid, so it’s not fluctuating,” said Hunter.

Wave Swell first built a smaller model and tested it in a wave pool. When that proved successful, they scrounged for funding and then, over a period of two years, built the 200-kilowatt version in Tasmania, then towed it to its current location and sank it just offshore.

In the year it’s been operating, Wave Swell’s engineers were able to remotely tweak the behavior of the turbine to increase its efficiency. What was once a constant speed turbine is now a variable speed turbine. Using forecast systems that can predict the state of waves up to a week in advance, the turbine is able to match the changing seas. Now it can convert some 48 percent of the wave energy that comes its way to electricity—beating the efficiency of wind and solar.

The 2500 denizens of the island have certainly appreciated the steady extra juice. The population is off the grid and, before Wave Swell, depended on a mix of wind, diesel, and solar.

Now Wave Swell is hoping to build a megawatt-sized blowhole, possibly one with multiple turbines, and possibly multiple units for a single location, making a kind of blowhole farm. “That would be the next logical step in the path to commercialization,” said Hunter.

A steady stream of renewable energy, available 24-hours a day, in any kind of weather is appealing to anyone worried about energy security. “It’s almost demanded by the people,” said Hunter. “To achieve it you need lots and lots of renewables in all shape and forms—so we’re here to make waves that part of the mix.