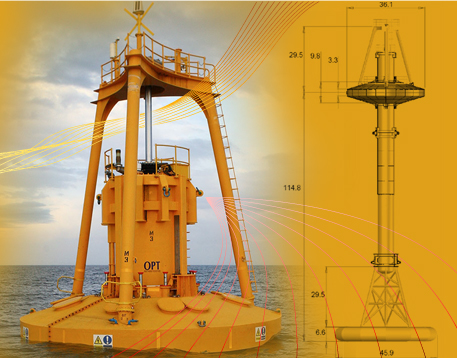 PowerBuoy 150 was successfully tested off the coast of Scotland.

Oregon’s 363-mile shoreline absorbs some of the Pacific Ocean’s mightiest and most notorious waves, powered by offshore storms and fed by long expanses of ocean that produce waves of 20 feet and more. Those conditions have drawn developers seeking to harness that energy and convert it to electricity, making Oregon a flash point of hydrokinetic power development in North America. The first project, a 150-kW unit that is the first of a planned 1.5-MW array and the first commercial wave-power project in the U.S., is a power-packed buoy that mechanically captures energy as it rides up and down on the waves. Offshore Power Technology, its Pennington, NJ-based developer, is betting the device will bolster not only Oregon’s portfolio of alternative power development, but others in the United States and Europe.

OPT has already invested between $4 million and $6 million in the PowerBuoy, a “smart” ocean-going buoy that uses piston-like motion in the float relative to its stationary spar to mechanically convert energy into electricity as it rides the waves. The mechanical stroking is converted using what OPT calls a sophisticated power take-off to drive a generator. The electricity is then transmitted to shore using the firm’s Undersea Substation Pod, which steps up low voltages produced by the buoy to higher voltages compatible with the onshore distribution network. The pod can handle up to 10 offshore power devices of any type, according to OTP.

The Oregon Innovation Council, which shepherds business development through funds from the state’s general fund, has steered nearly $10 million to the Oregon Wave Energy Trust and others. Private forecasts claim a power build-out of wave power would garner the state $2.4 billion and 3,000 jobs. The PowerBuoy is the vanguard in the effort.

Later this year, OPT will install the first PB150 some 2.5 miles off the coast from Reedsport, just north of California. Although the buoy packs some heft—it measures 150 ft tall by 40 ft wide—most of it will be underwater, leaving the top 30 feet of the buoy above the surface. Viewed from shore, company officials say it will be barely visible, if at all.

The device’s main components have been fabricated and are awaiting assembly at a site in Portland, says Greg Lennon, OPT business development director. From there it will be towed down the Willamette River to the Columbia River, the ocean and its installation site. After being untethered, it will naturally right itself as the spar moves vertically, and be moored to the ocean floor with a three-point setup.

Lennon says the initial version of the PB150, successfully tested over a six-month period in waters off of Invergordon, Scotland, relied on a hydraulic mechanical package to produce power. The PB150 is designed to work in waves across a range of 4.9 to 22.9 feet. In Scotland, OPT engineers confirmed the test buoy had production peaks of over 400 kW and averaged 45 kW at wave heights as low as two meters. Company officials say the results exceeded expectations and verified the system could produce an average of 150 kW in higher wave conditions. OPT expects capital costs of $1,000 per kW.

In Oregon, OPT has fitted the PB150 with a rack-and-pinion system to replace the hydraulics of the Scottish machine. Lennon notes the buoy is programmed to stop operations when wave heights exceed the design limits. The Bonneville Power Administration will distribute the power along its grid.

The PowerBuoy is not the only wave-power system under development. U.K.-based Pelamis Wave Power has several projects off the coasts of Scotland and Portugal, the latter having been producing power for three years. Its design differs from OPT’s PowerBuoy in that it is made up of five tube sections linked by universal joints, allowing flexing in two directions. It floats semi-submerged on the surface, facing into the direction of the waves. As the sections bend from the waves passing down their length, the movement is converted into electricity using a hydraulic power take-off system housed within the joints of the tubes. Power is transmitted using standard subsea cables.

OPT, with grants from the U.S. Dept. of Energy and input from the U.S. Navy and other partners, has worked on its technology since 2005, when a 40-kW test unit was installed off of Atlantic City, NJ. Its success led to a more advanced unit in 100 ft of water at U.S. Marine Corps Base Hawaii at Kaneohe Bay. From there, the unit increased to 150 kW, tested off of Scotland and Spain.

OPT hoped to begin operating off of Oregon in October 2012, but poor weather and high waves at the installation site threatened worker safety, as did towing the 140-ft-long buoy down river in heavy traffic hampered by seasonally violent waves, says Lennon.

OPT has not established a firm installation date, although it had hoped to work in the spring. The firm must also contend with other environmental concerns and permit restrictions, Lennon says. Spring is when the seasonal migration of gray whales pass on their way to summer feeding areas off of Alaska. Their route directly intersects with OPT’s site and environmental advocates worry about whether the PowerBuoy will interfere with the whales.

“We have the permit, but it is an adaptive management approach,” says Lennon. “This is new technology and there is a lack of true understanding of how it will respond to the environment.”