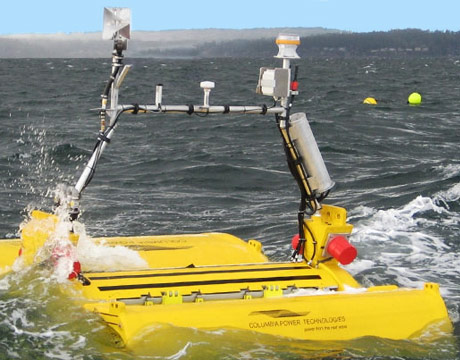 A prototype of the StingRAY, a generator powered by wave energy. Image: Columbia Power Technologies

When the sun hides and the winds die there’s one massive source of renewable energy that doesn’t sleep: the sea. Though there are many designs that aim to capture the power contained in the movements of the planet’s waters, Columbia Power Technologies is poised to go commercial in the coming years with its Stingray. The company just won a contract from the DOE to put the device in a real ocean for a real test with real output to the real grid.

The design of the StingRAY is conceptually simple. Two floats sandwich a rotary generator. As the floats pivot with the rise and fall and back and forth of the waves, they turn the generator. “The generator is spun clockwise and counter clockwise continuously as the wave comes and leaves,” says Ken Rhinefrank, Columbia’s vice president of research. Two spars connect to a damper below the surface of the water and the entire unit will be connected by an umbilical to the sea floor where transmissions will send the energy to a substation.

To get to that design required years of experimentation. What’s efficient for a wave of seven seconds is not necessarily what’s efficient for a wave of eight seconds. And the size and power of each wave changes radically throughout the day and the year. The average meter-wide wave has about 34 kilowatts to it. In the summer, though, those waves shrink to the 15-kilowatt level, while in the winter they might be as strong as 50 or 60 kilowatts. So Rhinefrank and his team investigated “literally thousands of shapes,” he says. After several iterations, the Stingray’s spar has become cylindrical rather than a cube and the floats are contoured. Thanks to these changes, the Stingray has increased its efficiency by more than 200 percent in the past few years.

But it’s not just the size and length of the waves that vary. Changing wave direction was another challenge Columbia needed to meet head on, as it were. Rhinefrank and his team settled on a “single point mooring” system to keep the Stingray at the optimal angle to the waves. Imagine a boat anchored with a single line. The boat will turn to face the waves as they change direction. “Hour by hour waves change direction,” Rhinefrank says. “The device does what we call ‘weather vane’ to head into the median wave direction.”

The biggest hurdle the team faced was finding a way to stay operational with storm force waves. Other wave energy capture devices have a range of motion, around five to ten meters, and they have a “heaving point absorber” that prevents unlimited vertical movement. “There are problems associated with that end stop,” says Rhinefrank. “With larger forces there’s a good chance of damage. To avoid that, when it gets above a certain wave height they lock the device down so there’s no end stop collisions and the device isn’t beating itself to death.”

Rhinefrank, though, wanted his device to be operational year round and did not want to have to shut down the device when the energy was at its best. So the Stingray has a 360-degree range of motion. “When a wave pushes it too hard, the float will be driven up and over and is free to return to the forward position,” he says.

To put the ocean to use powering our land-based needs, the StingRAY needs to be tested in real waters. “The first step is to demonstrate a single device and the demonstration has to show commercial viability in order to obtain investment to start a farm,” says Rhinefrank. “It’s expensive developing a new technology, even more so in the ocean where forces and storm waves create loads which can be more than 100 times what you would see in average conditions.” Once a single Stingray has proved its viability, it’ll be time to test a farm. Rhinefrank estimates that that might happen in the year 2021.

Until then, the ocean’s power will just be something to marvel at.

For Further Discussion
It’s expensive developing a new technology—even more so in the ocean where forces and storm waves create loads which can be more than 100 times what you would see in average conditions.Ken Rhinefrank, Columbia Power Technologies