An Electronic-Free Robot Goes for a Stroll

An Electronic-Free Robot Goes for a Stroll 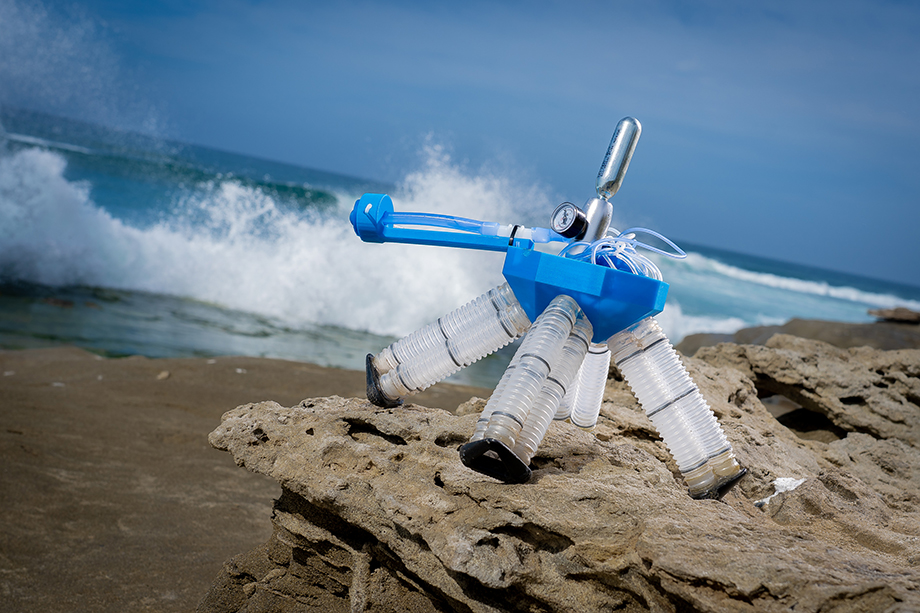 Robotics Technology and Society
Whether they roll on wheels or walk like a primate, are as soft as a jellyfish or as rigid as steel, are as tall as a building or as small as a bee, all robots have one thing in common: electronics. It’s hard to have a machine that moves, and has a power source, without wiring.

But now a roboticist at the University of California San Diego has created a walking, sensing robot that doesn’t need a nanogram of electronics, or even metal.

Dylan Drotman, now a post doc at the university’s Bioinspired Robotics and Design Lab, has been working in soft robotics for years, specifically on an air-powered robot. “Whenever I’ve given demos at conferences and symposiums, I’ve always brought this massive board with me,” he said. “It has pumps and valves, electronics and microcontrollers—it’s pretty heavy for something that is soft and squishy to hold and carry onboard. I knew there had to be an alternate solution to this problem.” 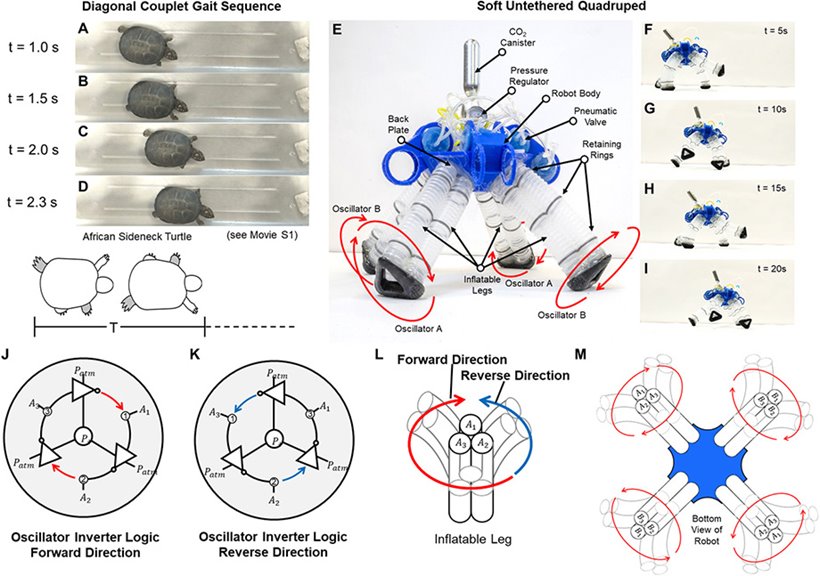 The robot's gait is based on that of an African turtle. Image: UCSD
That solution came in the form of soft valves created in the lab of Harvard’s soft-robotics pioneer George Whitesides. They had created a kind of continuously oscillating circuit. “I thought this was a very good fit for my robot,” said Drotman. “All I had to do is change the order of the valves and that kind of lead to the entire paper.”

The membranes of these valves are not unlike the popper toys that are essentially half of a hollow ball. They are flexible and bistable, meaning that with the right pressure they can snap between two states. This controls whether the chambers that are the robot’s legs are inflating or not. The inflated legs are “programed” to circle clockwise or counterclockwise in diagonal pairs. The air that’s driving this movement can come from off-board tubes, or an on-board carbon dioxide canister. (The canister and its regulator are currently the only metal parts on the robot, and they could easily be replaced by plastic versions in the future).

The result is an untethered, autonomous, four-legged robot that can amble across a terrain as naturally as a flesh and blood quadruped. In fact, its motions were inspired by the African Sideneck Turtle. “I used this gait be because it’s the simplest and uses the least amount of valves to create forward walking,” said Drotman. “So it was a very practical consideration. It also lends itself to circuit design and makes it a lot easier to control.”


The air-bot also has a non-metallic, non-electronic sensor on its front end. It’s hooked up to a fluidic transmission which changes the direction of the robot’s stroll when it bumps into something. Future iterations could include other sensors as well. Thermally reactive liquid crystal elastomers, for instance, could make the robot sensitive to temperature, turning it into a heat-seeking or heat-fleeing machine that changes direction when the environment gets too cold or too hot.

More for You: Tubular Robot Moves through the Body

In the area of soft robotics, many engineers use novel materials or create their own soft parts with molds and silicon. Drotman used commercially available bellows and off-the-shelf tubing for the legs. “They’re just regular, standard tubing,” he said. “You can inflate them to very high pressures. They’re always the same material, always going to look the same, always going to behave the same.”

They’re available to anyone that might want to try building the robot themselves. The air-bot does use some 3D-printed elements, but the files needed to create them are included in Drotman’s paper.

A mobile electronic- and metal-free robot has many obvious applications. It would be a boon in any place where a spark might start a fire or an explosion, like an underground mine. Wherever metallic elements would be a problem, such as inside an MRI machine, the robot could have a serious role. And, for such a wondrous cheap and safe automaton, there’s the world of toys.

“It’s a nice solution, and I like the way that it turned,” said Drotman. “I wish that there were other more robust versions of this out on the market. It would help lot of researchers and soft roboticists who are developing practical untethered systems.”