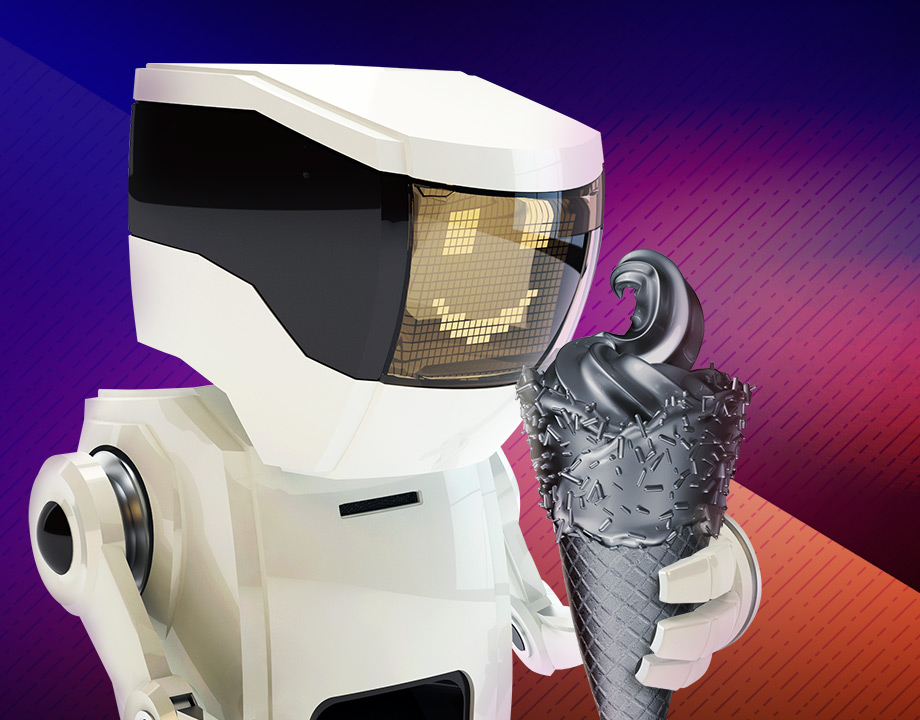 Researchers at the University of Pennsylvania have created a robot that powers itself by “eating” metal.

Fabricated Metal Product Manufacturing Primary Metal Manufacturing Robotics
Our tiny, sophisticated, crawling, rolling, and flying robots, with their abilities to sense, pollinate, deliver, and spy, hold the potential to transform our world. But unless they’re tethered to an outlet, none of the wondrous diminutive bots of recent years can move, communicate, or collect data for longer than a few minutes at a time. They just don’t have the juice to do it: Batteries are too heavy and harvesting energy from the sun or the wind takes too long.

But now robots have a new way to power themselves: foraging for metal. Researchers at the University of Pennsylvania have created just such a robot. Dragging a hydrogel over metal surfaces, the robot creates electricity from the resultant corrosion.

“The idea came from looking at biology,” said James Pikul, an assistant professor in the University of Pennsylvania’s department of mechanical engineering and applied mechanics. “Animals do this all the time.” That is, they harvest high-energy chemistry from the environment and convert it to power for locomotion and other activities.

But if you’re operating motors rather than muscles, metal works better than glucose. “If you have metal in the environment, then can you extract energy from that instead of having it all packaged nicely inside a battery.” 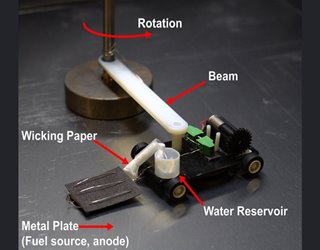 A little car carries a metal-air scavenger and a small water reservoir to keep the hydrogel slab that it drags moist. It generates electricity to power itself by oxidizing an aluminum surface. Photo: Pikul Research Group, Penn Engineering
The heart of their metal-chewing robot can be found in the trailer that the four-wheeler pulls behind them. It’s a hydrogel capped with a cathode. Water from the hydrogel oxidizes the metal, sending electrons from the metal to the cathode, essentially turning the metal into an anode. The water is more attracted to the hydrogel than then metal, so it interacts with the metal enough to start a current, but doesn’t leave a spill.

“Ore-nivorous” robots would find some metals more nutritious than others. “Aluminum and zinc are the equivalent of high-energy foods,” said Pikul. “Iron is good, but less energy dense.”

Whatever their diet, sucking energy from a slab of metal does not leave that metal unscathed. “We are consuming the metal,” said Pikul. “It’s the same process the metal would go through if it were rusting. Here, we are controlling the rusting.”

The current robot reduces the metal it’s using by 100 microns, roughly the thickness of a human hair. Nothing worth worrying about if the metal is a shard from a junkyard. “But if it’s a building, you probably don’t want to be consuming the metal,” said Pikul.

The metal munchers could find immediate application wherever there’s metal and a need for sensors or data collection. Think pollution monitors circling around stop signs, or GPS trackers in or on shipping containers. Already, undergraduate students working with Pikul have created a metal-powered light for parts of the world without electricity.

Further into the future, the technology will allow robots of any size greater autonomy. When they can scavenge metal and feed themselves, they will become more independent, with less of a need for down time. And they won’t be limited to locales already featuring metal. Farmers, for instance, could distribute chunks of metal in their fields so their robotic workers could digest them on the move. The robots won’t have to haul the weight of a battery and won’t have to pause as they re-juice.

Recommended for You: Is 2020 the Year of the Cobot?

“Put packs of metal out, and they can eat from pack to pack, covering a whole field without having to recharge,” said Pikul. The metal they would consume is ten times as energy dense as any battery a robot could carry.

“In the future you can have vending machines for robots as they interact or deliver things,” he said. “As they start to lose power they go to the vending machine instead of finding an outlet and sitting there as they recharge.”