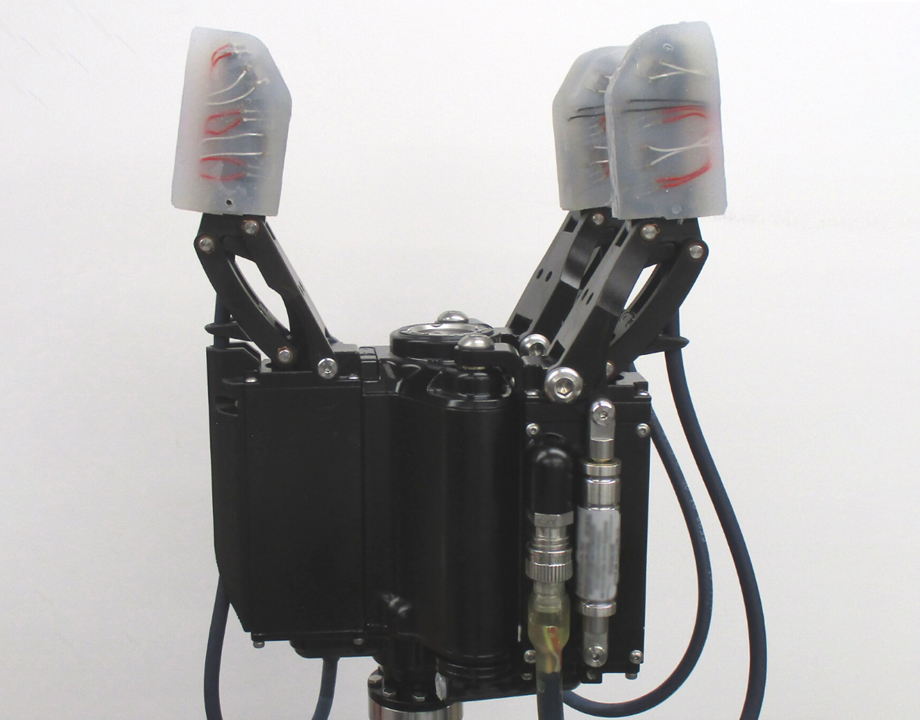 STARFISH, a robot hand developed for the Office of Naval Research, has the potential to deactivate underwater mines and find commercial applications as well.

Ocean, Offshore and Arctic Engineering Robotics
Collection:
Robotics Collection
Imagine waking up in the middle of the night and reaching for your phone. You can easily find it in the dark simply by groping around on your bedside table. Turns out this ability we take for granted as humans would also help the U.S. Navy conduct important stealth missions in the dark: defuse moored or bottom mines in the sea.

STARFISH (Strong Tactile mARitime hand for Feeling, Inspecting, Sensing and Handling) is a three-fingered robotic hand that is poised to help the Navy neutralize underwater mines stealthily, with no collateral damage, and while keeping humans safe. Professors Veronica Santos and Jonathan Poser at University of California, Los Angeles (UCLA) and the University of Washington, respectively, are responsible for the underlying research that propels the arm and helps it feel. Sarcos Technology and Robotics Corporation is helping “package the arm in a viable way and taking it to commercialization,” said Jorgen Pedersen, chief operating officer.

Pedersen expects the STARFISH to be part of Sarcos’s Sapien Sea class of arms, which has been tested successfully in the Pacific Ocean. He envisions that when the Navy sends out a call for a Mine Countermeasure Mission (MCM), a Sarcos robotic arm, Sapien Sea Class with the STARFISH installed on it, will be dispatched to the site. The system with two such arms and hands can be deployed to the threat while supervised from afar. Using visual and tactile information, the Sapien Sea Class and STARFISH system can render a device safe.

More Like This: 6 Top Trends in Industrial Robots for 2021

In the case of mine neutralization, STARFISH mostly functions on supervised autonomy. “There’s a person keeping tabs on what’s going on and authorizing the next step but most of the brawn is on the robot,” he said. In addition, the robot can also process data, so not all information has to be routed to operators. The system also has an option for full teleoperation, which might be needed to defuse improvised IEDs.

Potential commercial applications for STARFISH include maintenance of offshore platforms for wind turbines and infrastructure for the oil and gas industry.


Operating a robotic arm in a corrosive medium such as sea water is challenging. “The deeper you go, the arm also has to withstand pressure. Oftentimes some of these tasks are performed in turbid waters with zero visibility,” Pedersen said.

Related Content: A Military Robot Has Fallen and It Better Get Up

“It’s also not like you’re standing on firm ground, you’re floating and have to withstand currents,” he added. To compensate for lack of visual feedback in the dark ocean, the arm uses sensors that measure temperature, pressure, and vibration.

“All these sensing modalities really inform our brain; here it informs the AI to paint a picture of exactly what we’re seeing, even if we have limited access to some of our other senses,” Pedersen said.


The core sensors are molded into the skin, which is integrated into the electromechanical hand. “It’s our job to know where each of the [three] fingers are with respect to each other and to correctly process sensor signals based on current locations of the fingers,” Pedersen said. "Once we have built a map of the contours of the space around which we’re grasping – and how hard – the hand can tell whether it’s touching seaweed or a piece of lead."

You Might Also Enjoy: How Fiction Put The Science in Engineering

In addition to such tactile abilities, the STARFISH is similar to the human hand in one significant way: It conforms to the shape of the object it’s holding. Just like a human hand closes around a baseball, the STARFISH has one motor per finger that dictates the open and close position.


STARFISH is an improvement over many robotic hands, which typically have only two fingers. The key, Pedersen said, is to focus on what the robot hand can do, not what it looks like. “The human hand is what we’re aspiring to in terms of capability—it doesn’t have to be anthropomorphic,” Pedersen said.

While the grasp is more secure the more fingers you have—“although I’ll question how much capability your pinkie really adds to the equation,” Pedersen said—the mechanics of robotic operation become exponentially more challenging with each addition of a finger.

Keep the Read Going: 4 Ways Robots Will Lead Ocean Exploration
In the case of a hand, most of the actuation happens in the wrist or the forearm, Pedersen points out. “That’s where most of the motors are for your hand, but we don’t have that amount of space available in the electromechanical equivalent,” he said. “Trying to figure out how to put a lot of capability in a really small space is a technological feat.”

For now, STARFISH is not as fast as a human hand so it is not effective in cases where a quick grasp is needed. “Those are additional areas of research and development,” Pedersen said, “but the leap we have taken delivers balance, grip strength, dexterity and power.”

The use of robotics in industrial settings continues to accelerate at a rapid pace. Explore this collection to learn more about automation, cobots, AI-enabled robots, customized robots, and drones.