A Military Robot Has Fallen and It Better Get Up

A Military Robot Has Fallen and It Better Get Up 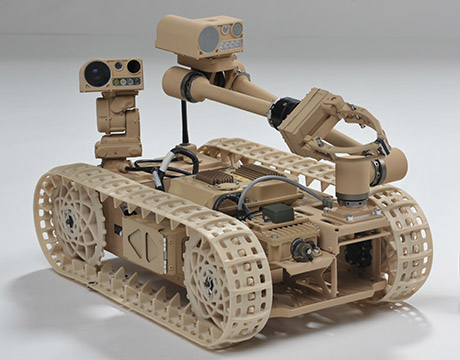 When a robot falls and can’t get up again, it becomes pretty much useless. If a robot designed to help soldiers in the field finds itself in that situation, the problem can become dangerous. Soldiers often feel the need to help their robotic companions if something goes wrong, putting them at even greater risk in serious situations.

Chad Kessens, a robotic manipulation research engineer for the Army Research Laboratory, working in conjunction with the Johns Hopkins University Applied Physics Laboratory, has created software that can tell if a robot has the ability to right itself when it becomes immobilized due to a specific environmental or operational condition. Designers can then look at where the robots would fail and tweak them to so they can get back to work after a fall in almost any situation.

Kessens began work on the project after he took a training course where soldiers were using robots to find IUDs.

“They don’t typically have line-of-sight to the robot. They’re reliant on information from the operational control unit. When a robot flips over, the camera is looking at the sky or the ground,” he said, adding that whoever is controlling the robot has no way of knowing which arm or leg might help the robot up. “These robots need to self-right on their own.”

To determine if a robot could re-right in a specific scenario, Kessens looked beyond links and mass and the mechanics of robots to the world of the living, specifically the cockroach. “If you have an organism that can’t right itself, it’s probably not going to last very long,” he said.

Before looking at the cockroach, the analysis that Kessens used on a robot assumed its joints moved slowly. Roaches taught him otherwise. In many situations, a roach on its back needs to move its wings quickly to right itself. Slow movements won’t do the job. “If you have joints that can move quickly, that can move mass quickly, you can use dynamics and kinetic energy to get yourself to right in more situations,” Kessens said.

Through his research, Kessens knew the various tricks that designers have used to get robots to right themselves. These included egg shaped chassis that allowed robots to passively roll into the correct orientation, special righting mechanisms such as flaps, extending links, or otherwise altering existing elements of the robot. “My goal was to take all these different methods, analyze a specific system to see if any of these methods would work and generalize that.”

Kessens had to overcome several hurdles while developing his software. One of the biggest shows just how important it is for engineers to learn in-demand skills and new technologies. “The biggest challenge for me was learning to code better,” he said. I’m a mechanical engineer.”

Another was analyzing every joint in a robot. “You can think of a five-degree system as ten times harder than a four-degree system,” said Kessens. “A six-degree system is like 100 degrees harder.”

The analysis grew even more complex when Kessler took into account all of the different shapes that make up a robot’s design. This is where the collaboration with Johns Hopkins University Applied Physics Laboratory (APL), specifically Galen Mullins, a robotics engineer at the APL, paid off.  Instead of looking at every possible configuration, as Kessens had been doing, Johns Hopkins researchers “had techniques for sampling that space in an intelligent way and understanding what the space looked like using far fewer samples,” Kessens said. “Because of that we were able to handle higher degrees of freedom.”

The software that Kessens and his colleagues ultimately came up with has already proved its mettle. The U.S. Navy needed to know that a lightweight “backpackable” bomb-defusing robot slated to hit the field this year was capable of righting itself. “We analyzed that platform and determined it was able to right itself 100 percent of the time,” Kessens said.

His analysis can be applied to large, human-sized robots down to those the size of tiny insects.  But it assumes the robot can sense its configuration (the angle of its joints at any moment) as well as the direction of gravity.

When the Army sets out to buy robots, they’ll now have a tool for gauging their self-right-ability. And the companies selling the robots can meet those needs in the design phase. At the moment, when a weakness has been revealed for a certain situation, it’s up to the robot creator to find a way to fix it. In the future, the software may be able to suggest new designs as well.  “As a designer you have to say ‘Oh, I see the robot can only right itself 90 percent,’” Kessens said. “Then the software lets the designer understand the 10 percent it can’t right itself.”

For Further Discussion
If you have joints that can move quickly, that can move mass quickly, you can use dynamics and kinetic energy to get yourself to right in more situations.Chad Kessens, the Army Research Laboratory