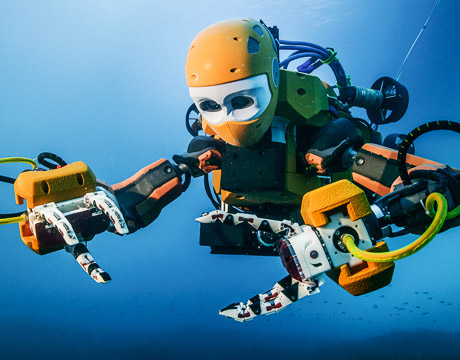 Space was once referred to as the “final frontier.” But there remains a frontier on Earth: The oceans. There is still much to explore in the depths of the world’s oceans, and resources that may change the world. Energy, valuable metals, and food are just some of the resources that the oceans could help provide as technology grows.

Robots will be playing a key role in ocean exploration and here are four ways they’ll be doing it.

Traveling the ocean floor can be challenging for robots, which normally progress in a direct, straight line. Which means any navigation done must be handled by a human. That’s why artificial intelligence is being studied at Oregon State University’s College of Engineering as a way to give robots the ability to adjust their movements to the environment, without a human having to make the decision. The algorithms being developed should allow the robots to take in new information, such as ocean currents, and change its direction. Robots being able to take more efficient paths could save energy, allow for longer expeditions, and free up humans for other work.

The deep seas are a treasure trove of valuable metals such as gold, silver, platinum, copper, cobalt, manganese, and zinc. And robots could be the key to accessing these treasures.

Most of the mining possibilities are centered in the Pacific Ocean, including the Central and Eastern Manus Basin near Papua New Guinea. While the waters there are deep – around 3,400 feet – a robot could navigate there.

Canadian company Nautilus Minerals is currently developing a copper and gold mining program on the seafloor in Papua New Guinea that is planned to be operational in 2019. The robots it plans to deploy include two kinds of cutting robots and a collecting robot to gather the materials.

Protecting our waters and shores may soon fall in some part to robots. The Washington Post reported that the Navy has opened a competition for unmanned submarines that can navigate autonomously. Boeing and Lockheed Martin are both vying for the deal.

The subs would be primarily used for surveillance, as well as for finding and defusing mines ahead of ships such as aircraft carriers. These robots are part of a military idea that considers robotics as the workforce, and drones as “force multipliers.” Robots are seen as augmenting human efforts in combat, but not taking over.

Liquid Robotics, a subsidiary of Boeing, is collaborating with the National Oceanic and Atmospheric Administration to help protect and preserve the Hawaiian and American Samoa marine sanctuaries and monuments. The Wave Glider, Liquid Robotics’ autonomous surface ocean robot, will be a key part of monitoring and surveilling the area, gathering data that would be too difficult or expensive with more traditional research.

Sensors mounted on robots as small as surfboards will be able to monitor coastal waters, giving information on everything from pH and salinity levels in the water to the presence of sharks.

Stanford University has developed Ocean One, a humanoid robot with stereoscopic vision, eight thrusters, and two arms that can explore ocean depths for research that would be too dangerous for people to attempt.

Melissa Hebert is an independent writer.