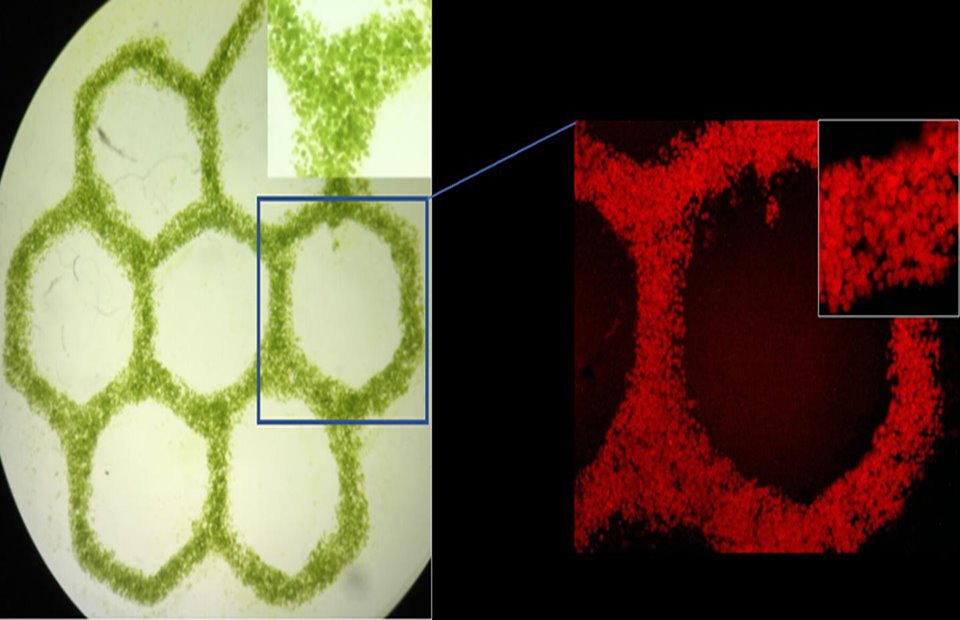 In many ways, regenerative medicine is the next engineering frontier. But, one continued challenge of developing tissues and organs in the lab is the lack of vascularity. Without a sufficient flow of oxygen, the cells begin to die and the entire structure can go to waste. Yu Shrike Zhang, a bioengineer at Harvard Medical School and the Brigham and Women's Hospital, may have landed on a solution.

Zhang has been an avid nature watcher for nearly two decades and in his study of birds and other wildlife, he drew a comparison to his own work, which inspired him to explore plant-based cells as a means to generate oxygen in lab-grown tissues.

“Birds and animals rely on the oxygen that plants produce, and plants rely on the waste (or carbon) that animals produce. This symbiotic relationship is what makes up a healthy ecosystem,” Zhang explained. “What we discovered is that we can recreate a mini ecosystem in engineered tissues to allow for better growth and development.”

Zhang’s creation of a mini ecosystem involves combining cells from algae with human liver cells in a cellulose-based bioink made out of hydrogel. The bioink is then loaded up into a 3D bioprinter, which operates much like a standard inkjet printer but instead of printing with ink, it prints with a hydrogel containing living cells. The 3D bioprinter lays the basic structure, or scaffold, which in this case is human liver tissue. The cells use this scaffold like a blueprint so that they know what to build.

As the cells work to form the tissue, the algae feed off the carbon produced by the liver cells and make channels throughout the matrix. Those channels then feed oxygen to the human cells, aiding in their growth. Once the human cells have taken shape, Zhang goes in with a cellulase-base to dissolve the cellulose from the bioink, killing off the algae.

“We designed the bioink to be dissolvable because it would be dangerous to implant plant cells into a human body,” Zhang said. “The bioink is primarily based on cellulose, but also the algae is based on cellulose as well. So, if we expose this whole construct with cellulase, which selectively digests cellulose, we're going to be able to remove both the bioink and the algae cells at the same time, exposing the connected vascular channels within.”

Algae is ideal for this particular type of application for a multitude of reasons. The first is that it reproduces quickly–almost on par with human cell generation–so the team can access enough viable cells from both sources to create their bioink.

The second is that algae is a single-celled organism, meaning the cells do not need to be isolated from a larger plant before being transformed into bioink. Zhang uses a specific algae, Chlamydomonas reinhardtii, but said there may be better options to promote growth requiring more exploration.

More for You: Lab Equipment: Why Buy When You Can Rent

The third is that the algae cells do not damage the human cells, but work alongside them in perfect harmony. Other oxygen-producing biomaterials have been used to promote vascularity, but they often do not have a long enough lifespan to allow for the human cells to develop and can become toxic as they break down.

Zhang hopes to pursue more complex organ tissue development, including kidneys, hearts, and muscle. But, the applications for this plant-based method could stem beyond medicine, and have an interesting future in food, as well. Zhang may soon be teaming up with his colleagues on plant-enriched animal products that could have the same symbiotic approach. This could result in more nutritious food to feed a growing human population.

Whatever the application, Zhang’s discovery could help advance many projects that have been delayed in reaching their potential due to a lack of oxygen.

“The community is getting really excited about the findings,” Zhang said. “We are looking forward to continued testing and building on this concept.”

Cassie Kelly is a technology writer in Columbus, Ohio.