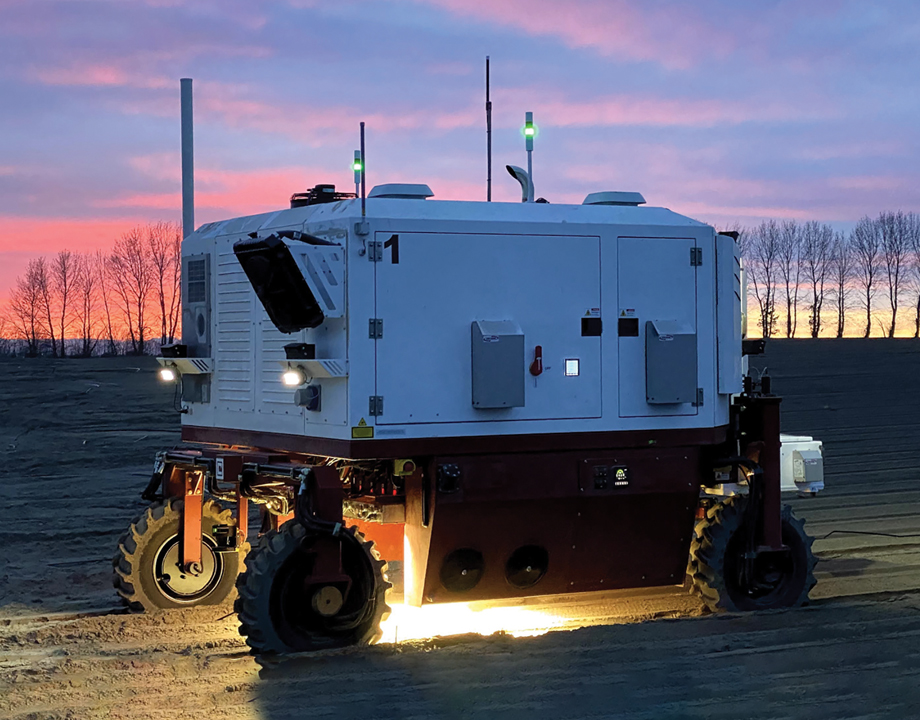 Running on diesel rather than batteries, this robot can eliminate agricultural weeds up to 20 hours per day. Photo: Carbon Robotics

Developers around the globe are turning their attention to agriculture, introducing various robotic solutions to harvesting, tilling, fertilization, and pest control. Many of them reduce the volume of fertilizer, pesticides, and herbicides through precision applications. Now, one West Coast company is eliminating the need for herbicides with a robotic platform that burns weeds away with lasers.

Seattle-based Carbon Robotics introduced its autonomous weeder this year, some three years after the startup was established by software executives. The platform combines computers using deep learning to identify and “zap” weeds with carbon dioxide lasers, mounted on a four-wheel platform powered by diesel and hydraulics.

The weeder can kill over 100,000 weeds per hour with its eight laser modules, said John Mey, Carbon Robotics director of engineering. He credits the ability to use deep learning techniques with the development of sensors and camera resolution for fast development.

More for You: Personal Robots Learn by Seeing it Done

“Being able to see weeds, I guess, is actually the biggest thing,” he said. “In the beginning we were just shooting any size. But we quickly found out that large weeds take an exponential amount of time to kill. So getting better camera sensors, we can see weeds that are one-day old and spend 300 milliseconds on it. If we can go into a field when it’s in that state, we clear weeds significantly faster than if a farmer loses control. A six-week-old plant is going to take maybe 50 times longer to kill.”

The cameras work in conjunction with the lasers, using a piece of optics that aligns with the laser beams, according to Mey. “The laser beam goes through a special piece of optics that combines a camera with it so we can see what we’re shooting,” he said. “Then, it goes through two mirrors that allow us to aim on the [soil] bed top. Each laser can shoot a footprint of roughly 15 inches by 15 inches so there’s some overlap. They can each independently shoot weeds or they can combine and shoot the same one.”

Mey said the team has worked closely with farmers in developing the weeder. It was on their advice they opted to have the weeder run on diesel and hydraulics. Farmers want the robot to operate continuously, especially during a short window after planting when the crop starts to come in.

Batteries would work, he said, but need an hours-long charging period when depleted. “The farmers want this to work 16 to 20 hours a day, so they can keep feeding it diesel,” he said. “It’s optimal for them. They also liked hydraulics because the power density is there, they already know how to deal with it.”

The four-wheel-drive weeder mimics familiar tractors in many ways, and is designed for large tracts of fields. It was developed for work in onion fields with a 24-inch ground clearance. Along with coordinating sensors, cameras and lasers, Mey said one of the biggest challenges was making the laser packages rugged enough for field work.

“We’ve isolated sensitive components and modularized them so that if a farmer has a laser break, they just take the tube out and ship it back,” said Mey. “But they keep a stock of the components on hand so they can just swap it in and get the robot back up.”

The firm has multiple weeders working in the Northwest. Mey said the platform is adaptable to working with other crops. “Farmers have been asking us to try different crops and its been surprisingly easy. There is no mechanical change. There’s some deep learning. You capture some images and label them: This is a weed, shoot it; This is a carrot, don’t shoot it. A day later we are shooting and weeding.”