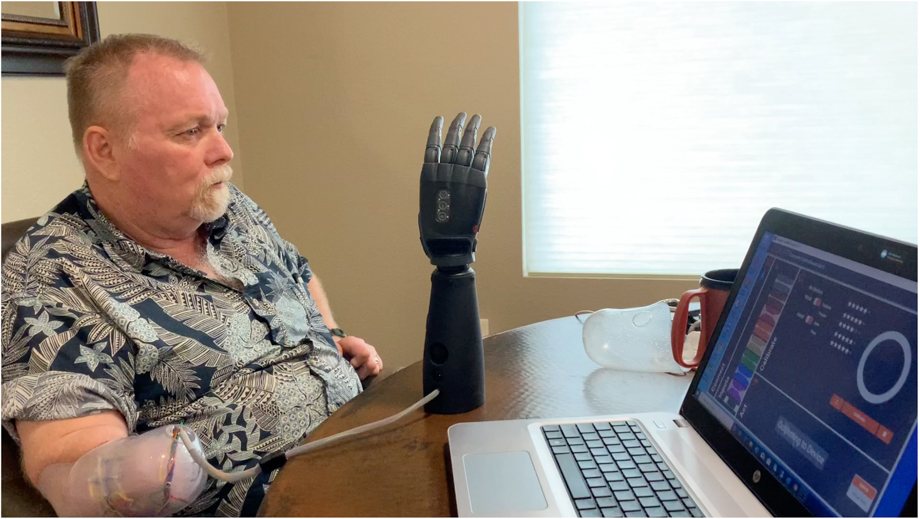 Medical Equipment and Device Manufacturing Robotics
The continuing rapid development of Industry 4.0 technologies also is benefiting disabled people who have lost limbs. In the U.S. alone, some 185,000 people annually have an amputation; 2.1 million people are living with limb loss, a number expected to double by 2050, according to the U.S. nonprofit Amputee Coalition. Vascular diseases such as diabetes, and trauma, often related to car accidents, are the two leading causes of amputation, but not everyone is fitted with a prosthesis. But for those who do use them, technology is delivering more options for highly functioning artificial limbs. Here are three examples of how technology is improving prosthetics and with it people’s lives.

Consciously controlled limbs, where a person controls the movement and even experiences the sensation of touch, have now been proven to work. In a study published earlier this year in the New England Journal of Medicine, Swedish researchers detailed tests on seven patients fitted with a mind-controlled prosthetic arm for up to seven years. Unlike most prosthetic procedures, the implant system, called e-OPRA and developed by Integrum AB in Sweden, attaches the prosthetic arm to the bone in the stump of the amputated limb to provide mechanical stability in a process called osseointegration.

Electrodes are implanted in the muscles and nerves of the amputated arm, and a connector is embedded in the end of the screw for an electrical interface. Neuromuscular electrodes within the implant electrically interface with the sensors in the body to create a connection through Integrum’s control system placed in the prosthesis. Sensory input from the prosthesis is transmitted back to the person as it would from the missing limb. That allows the person to control movement simply through the mind.

Touch sensations emanate from force sensors in the prosthetic thumb. The control system converts those to electrical signals that stimulate a nerve in the stump of the arm, sending it to the brain which interprets it as pressure. For now, Integrum is conducting clinical trials for prosthetic arms but has plans to offer the system for lower lower limbs. The company says its system is compatible with any robotic prosthesis.

Artificial intelligence and machine learning are key to new systems that allow amputees to move their prosthesis intuitively. Integrum’s system uses AI algorithms but it differs from another example offered by Chicago-based COAPT. Its system, now in a second generation, uses a number of sensors placed on the stump of an amputee’s arm to capture an array of commands coming from the brain. Those commands then activate the prosthetic arm intuitively through sensors and the control panel placed within the prosthetic. The system then stores user data to improve the movements as the user learns to operate the system. 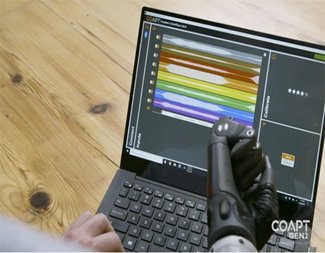 COAPTA’s controls work with the user to fine-tune movements. Image courtesy of COAPT.
Rudimentary control technology has been in use since the 1970s, working with only two to three muscles, said COAPT co-founder and CEO Blair Lock. He and his colleagues recognized the robotic advances being achieved in prosthetic limbs, but they also determined that existing “unmodern” control systems were not strong or smart enough for a user to gain the complete benefits they offered.

“The electrical system of the human body produces an amazing spectrum fidelity of information from music that these muscles play, not just two areas of loudness,” said Lock. “And so when we sensorize these electrodes in the limb, around the limb, we were able to use the algorithms that were developed through research to decode what that natural intent of the wearer is. So now all the amazing features that now is on these devices, we can take advantage of. The human can naturally control that device to do what they want it to do.”

The system works by determining a pattern of myoelectric signals that corresponds with what the user wants the prosthesis to do. There are different patterns for different movements, said Lock, and the firm’s algorithms recognize and decode that pattern in real time. For instance, moving a thumb uses a pattern different from opening a hand, which also is different when closing a hand. The system then tells the prosthesis to move according to the brain’s intentions.

More for You: Chic Prosthetics

These solutions don’t come without a cost, however. High-end prostheses can cost from $10,000 and up. Fitting one with COAPT’s control system may add another $10,000 to the cost, which Lock said is simply a “matter of economics.” Although the number of users is approaching 1,000, he said, reductions based on economies of scale aren’t available. The system also is compatible with any robotic arm currently on the market.

While more costly robotic arms incorporate 3D printing in their production, the technology really benefits simpler prosthetics that are more affordable. One device, the BionicHand, uses 3D printing in its production and captures myoelectric pulses for four basic hand movements. But even simpler devices are being built with 3D printers for people with little means and those in developing countries.

According to the Amputee Coalition, a prosthetic hand can cost thousands of dollars; a standard myoelectric arm costs $10,000. A 3D-printed prosthesis can be had for as little as $50 because 3D-printed materials can reduce the price by up to 90 percent.
That is extremely important for children, who can be fitted with succeeding prostheses as they grow, and in developing countries.

Project e-Nable, for instance, provides 3D-printable prosthetic hand designs. E-Nable is a global online community of volunteers who make free 3D-printed, low-cost prosthetics for children and adults in need. Open-source designs created by volunteers have produced prosthetics for some 8,000 people, according to the organization.

At the upper end, 3D printing enables more custom, transparent designs for legs. Industrial designer William Root created an innovative design using 3D-printed titanium. UNYQ, a San Francisco-based firm, specializes in 3D-printed medical wearables. Last year it announced development of a 3D-printed leg socket that conforms to an individual’s specific body with sensors to record movement data. A clinician can use the data to replicate the socket, reducing costs if the original socket is damaged or the user is fitted with another, different prosthesis.