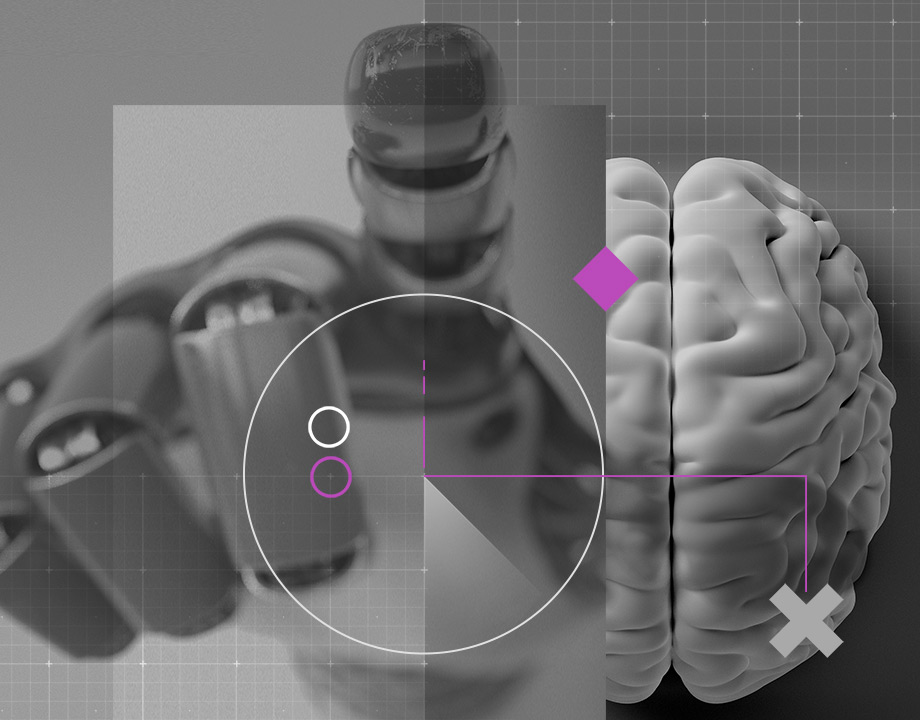 Some of the latest advancements in prosthetic limb technology include smart artificial skin and improved neural connections.

Significant technological accomplishments have been achieved in prosthetics in recent years. For instance, sensors placed on the skin can detect neural signals that trigger motion in prosthetic devices. Although this is significant, the resultant motions are still basic and do not provide tactile sensations.

Take one of the most impressive prosthetics to-date, the LUKE Arm. Named after the robotic hand that was fitted to Luke Skywalker in The Empire Strikes Back, this prosthetic device is manufactured by Mobius Bionics. The arm consists of metal motors and connectors with a clear silicon "skin" that covers the hand, which is pre-programmed to perform a variety of grip patterns. The entire device is powered by an external battery and wired to a computer for processing signals. 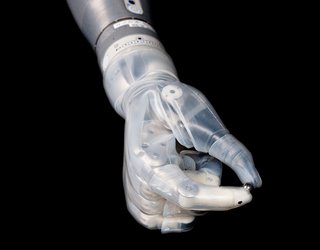 LUKE arm is one of the most advanced commercially available prosthesis. Photo: Mobius Bionics


“For all its merits, the LUKE Arm contains only 19 sensors and generates six different types of movements,” said Gregory Clark, associate professor of biomedical engineering at the University of Utah. “Similarly, its neural interface can capture or convey hundreds of different electrical signals to or from the brain. Although this is a lot, these numbers are impoverished compared with the thousands of motor and sensory channels of the human body, or its natural functional capabilities.”

To create more realistic functions in the arm, Clark used a UofU invention—the Utah Slanted Electrode Array—a bundle of 100 microelectrodes and wires that are implanted into the amputee's nerves in the forearm and connected to a computer outside the body. 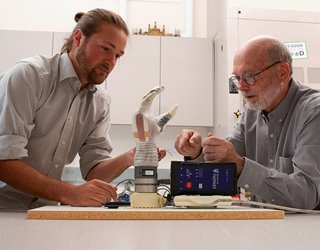 Greg Clark (right) and Jake George working on improving the LUKE arm. Photo: Dan Hixson, University of Utah College of Engineering
When the user thinks about picking up an object, the implanted electrodes detect that signal and the computer translates them into digital signals that direct the arm to move—restoring the ability to “feel” the object. Device users could distinguish between large and small, as well as soft and hard objects within a few seconds of handling them with their prosthetic hands.

A similar project in Europe is called DeTOP for Dexterous Tranradial Osseointegrated Prosthesis, and based in Scuola Superiore Sant’Anna in Pisa, Italy. It involves a patient who received titanium implants in two forearm bones, from which electrodes to nerves and muscle were extended to extract signals to control a robotic hand and provide tactile sensations.

Recommended for You Most Innovative Medical Devices of 2019 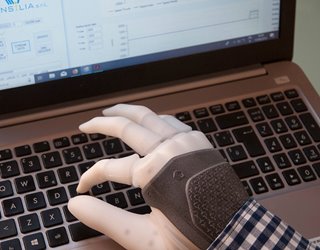 A Swedish patient became the first recipient of an osseo-neuromuscular implant to control a dexterous hand prosthesis. Photo: DeTOP project
“Researchers can electrically stimulate these nerves in a similar manner as information conveyed by the biological hand,” DeTOP researchers wrote in a statement announcing their successful surgery. “This results in the patient perceiving sensations originating in the new prosthetic hand, as it is equipped with sensors that drive the stimulation of the nerve to deliver such sensations.”


Artificial sensory skins are becoming increasingly sensitive. For example, Massachusetts Institute of Technology engineers have developed a scalable tactile glove that, with the help of deep convolutional neural networks, can recognize objects through touch alone. 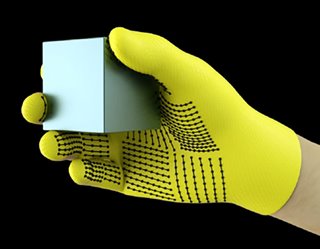 Engineers have developed a sensor-packed glove that captures pressure signals as humans interact with objects. Photo: Courtesy of MIT researchers
The simple knit glove contains 548 tiny sensors that gather pressure-signal data when objects are held, identifying objects (and their weight) upon touch successfully about 75 percent of the time.

Engineers from the National University of Singapore (NUS) have created a highly sensitive artificial skin called Asynchronous Coded Electronic Skin (ACES) that can detect touches more than 1,000 times faster than the human sensory nervous system. For example, it can differentiate physical contacts between different sensors in less than 60 nanoseconds—the fastest ever achieved for an electronic skin technology. 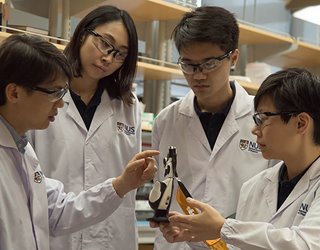 Artificial skin developed by assistant professor Benjamin Tee (far left) and his team responds 1,000 times faster than the human sensory nervous system. Photo: NUS
“Scalability is also a critical consideration as big pieces of high performing electronic skins are required to cover the relatively large surface areas of robots and prosthetic devices," said Benjamin Tee, an assistant professor of materials science and engineering at NUS and the lead author of the research.

“ACES can be easily paired with any kind of sensor skin layers—for example, those designed to sense temperatures and humidity—to create high performance ACES-enabled electronic skin with an exceptional sense of touch that can be used for a wide range of applications, including prosthetic devices.”

With these advances, the science-fiction images of bionic limbs controlled by the brain and providing authentic sensory feedback are likely to become a reality in the not-so-distant future.