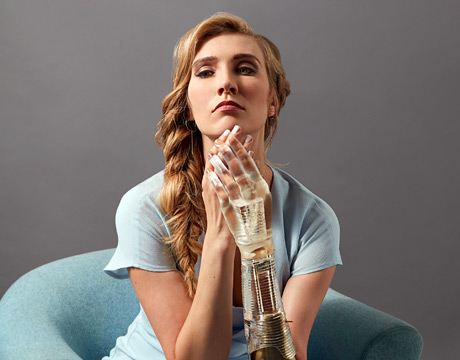 Who says your prosthetic arm can’t be as fabulous as your Gucci bag? Certainly not Danielle Clode, a New Zealander living in London and a unique product designer whose desire to understand prosthetics led her to perceive the artificial limb as an all-too-human means of self-expression, reflecting one’s personality.

In short, a fashion statement.

In collaboration with Sophie de Oliveira Barata, founder of the Alternative Limb Project, which turns prosthetic arms and legs into art, Clode created “Synchronised,” displayed last summer in Artful Innovation: Inclusive Design and Technology, an exhibition at the Kennedy Center in Washington, DC.

The two designed the “reimagining of the prosthetic arm as a piece of jewelry: a gestural, kinetic addition to the body” for model Kelly Knox, born without a forearm, who is also a performance artist and advocate for diversity in fashion.

The arm’s electroplated gold carbon fiber transitions into clear, acrylic layers that reflect a mirrored form of Knox’s right arm. One layer of acrylic in the wrist ticks in time to her heartbeat; internal electronics take a reading of her pulse and can continue to express it even after she takes the arm off.

The wrist’s puzzle-piece-like end connects to two interchangeable hands, one in clear and one in blue resin. Clode, who now manages Dani Clode Design, has also elevated human augmentation and body diversity with her Third Thumb. The prosthetic device that gives the lie to the term “all thumbs” won her this year’sHelen Hamlyn Design Award for Creativity at the Royal College of Art, where she earned her master’s in product design. The device exploits the innate coordination between our hands and feet, found for example in driving a car, using a sewing machine, and playing the piano, via a Bluetooth connection between the 3D printed parts and sensors underneath the user’s big toes. Adding an extra of our most dynamic digit creates a hand with two thumbs opposable to each other.

“The way people interact with prosthetics is so unlike any other product,” Clode said. Captured in a viral video, she tested her prototype, in homes and a pub, on subjects giddy with their newfound dexterity, engaged in such tasks as carrying wineglasses, dealing cards, stacking building blocks, squeezing a lemon, and even playing the guitar.

By staying true to the etymology of “prosthesis,” to add, put onto—not fix or replace—Clode represents a generation of revolutionary designers whose individualized prosthetics extend the reach of humanity, each with an aesthetic of its own.

Here, success is measured not by more euphemisms for the word disability, but by redefining ability itself. Read the latest issue of the Mechanical Engineering Magazine.

The way people interact with prosthetics is so unlike any other product.Danielle Clode, Dani Clode Design