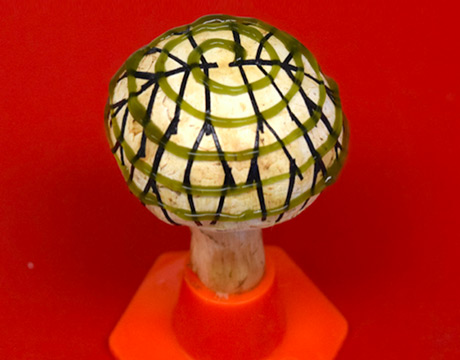 Mushrooms can delight the palate, be turned into packaging, and knock you dead. Now they have a new power—generate electricity by working as the substrate for a bacteria and graphene energy system. Call it the world’s first bionic mushroom.

“When you go down on the size scale, both the biological and non-biological worlds have cool properties,” said Manu Mannoor, an assistant professor of mechanical engineering at the Stevens Institute of Technology.

In particular, cyanobacteria are known for their ability to photosynthesize and graphene is known to conduct electricity.

“We were looking for a way to somehow merge these two worlds and create something in the macroworld so we can access them.”

To do that, they needed a mushroom.

For You: Artificial and 3D-Printed Skin Advances for Robots and Humans

When cyanobacteria photosynthesize there is a moment before the sun’s energy is converted to sugars when electrons are produced. To access those electrons, Mannoor and his team planned to lay a grid of graphene nanoribbons across seams of the bacteria. To do so, though, they had to keep the bacteria alive. Previous researchers hoping to exploit cyanobacteria’s energy conversion powers have had trouble doing that. In the natural world, cyanobacteria thrive in warm still waters. But on things like silicon, they perish. Manoor thought a mushroom might make a friendlier home for the bacteria.

They found that atop a specimen of agaricus bisporus, or the button mushroom, the bacteria stayed alive. Mannoor and his team were able to 3D print a spiral of densely packed cyanobacteria onto the head of the mushroom. A matrix of graphene nanoribbons—mixed with a conductive polymer to make a conductive 3D printable ink—were then printed over the bacteria. The ink, when it contacted the bacteria, sucked away electrons.

“There are tiny things which are penetrating into the cells,” Mannoor said. “The electricity is collected and wired down through the stem of the mushroom.”

Top Story: How Engineers Can Resolve Conflict and Save Their Business

The system, essentially a tiny solar panel, is not likely to be powering our homes any time soon. But it’s ripe for other applications. “We’ve started thinking more in terms in how do we use this for biomedical applications,” Mannoor said. For instance, a bacteria and fungal device could be used to monitor the inside of the gut, to activate medication, or to modify dosage. But there’s much work to be done before that could happen.

There are some pesticides that interact with cyanobacteria cells, so this system in its current form is a pesticide sensor.
Manu Mannoor, Stevens Institute of Technology

While Mannoor’s mushroom was a proof of concept, it could be used today to give farmers an idea of the concentration of pesticides in their fields. “There are some pesticides that interact with cyanobacteria cells, so this system in its current form is a pesticide sensor,” he said.

A bacteria-coated mushroom could also be used to sense things humans might not want to get near.

“Think of something like Ebola, where you don’t want to be physically present to detect it,” Mannoor said. “We can have theses mushrooms growing in the field and, if you can augment the system with wireless, these mushrooms will be small hotspots of sensors, which can send off a signal to a nearby receiver, sensing the presence of viruses or other potential biohazards in the air. It’s really totally autonomous.”

But however promising these applications, Mannoor will leave their development to others. Getting the bacteria, the graphene, and the mushroom to work together is enough for him. “That’s what we are excited about, that we can actually interface and merge between the world of biology and the world of electronics, where in the final system we won’t be able to tell where the biology ends and the electronic begins.”

More Exclusive Stories from ASME.org:
The Rise from BattleBot to Corporate Robot