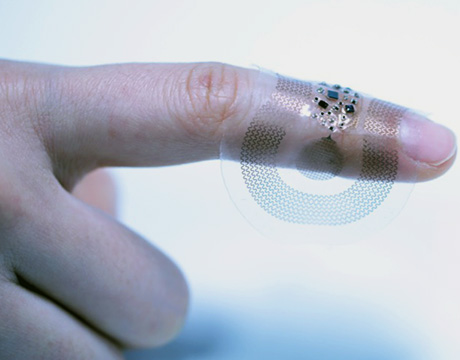 The wireless sensors provide data as precise and accurate as that from traditional monitoring systems. Image: UC San Diego

An interdisciplinary team led by researchers from Northwestern University has introduced a soft, lightweight, skin-like monitor that contains all of the sensors and circuitry needed to monitor at-risk newborns and warn nurses about problems wirelessly.

This promises to simplify monitoring premature babies and eliminate gluing hard sensors to delicate neonate skin—all the while making it easier for parents and caregivers to handle preemies without getting entangled in monitor cables.

“This is important because it shows you can really do body-integrated electronics and soft-shape conformal devices at the highest level, in probably the most demanding area of the hospital environment,” said senior author John Rogers, a professor of biomedical engineering, materials science and engineering, neurology, and neurological surgery at Northwestern University. “The physical construction and properties of these devices are unique in terms of what you see in the world of consumer electronics.”

Every year an estimated 15 million babies are born prematurely around the world, putting them at an increased risk of death. Many spend time in neonatal intensive care units, where doctors monitor their heart rate, respiration, blood oxygenation, and other vital signs so they can address any abrupt changes.

But he devices that used to take those potentially life-saving measurements are far from ideal. Rigid and invasive, their multitude of wires impede natural movement, clinical care, and parent-child interactions. The adhesives used to attach the clunky monitors can also harm a baby’s delicate skin.

“These are unique challenges compared to the adult intensive care unit or other areas of hospital care,” Rogers said. 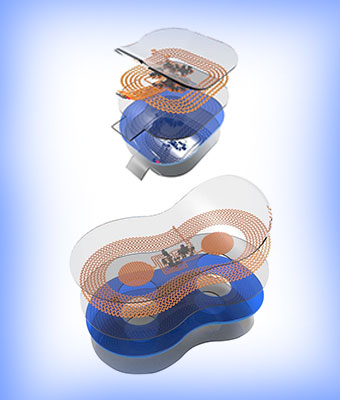 “This is the first time we’ve pulled everything together and addressed a specific demanding set of requirements in an unmet clinical hospital setting,” he said. “It’s a step-change in what’s been demonstrated before in skin-interface electronics.”

The wireless monitors, which resemble a sticker shaped like the number “8,” are deceptively simple in appearance. The integrated circuits consist of tiny, half-millimeter-thick silicon chips interconnected along a series of concentric ovals of zigzagging 5-micrometers-thick flat metal wires.

Rogers calls this geometry “filamentary serpentine.” The result resembles a spring on a two-dimensional surface. Their zigzagging shape allows them to bend, twist, and even stretch to accommodate the motion without breaking or pulling out from their connections. The system also includes a magnetic loop antenna to transmit data.

A microfluidic chamber filled with a nontoxic ionic liquid provides mechanical isolation between the electronic components and the skin. The entire system is embedded in a thin layer of soft silicon elastomer.

When used on patients, two separate, time-synchronized monitors—one on the chest, another on the foot—wirelessly communication through an antenna structure mounted in their bases. The antenna receives power wirelessly, similar to the way wireless smartphones rechargers work. And this does away with the need for large, heavy batteries.

Having two separate devices provides doctors and nurses with more detailed information than existing monitors that deliver the profession’s standard of care. Because both wireless devices take temperature measurements, doctors can tell whether a baby’s core temperature differs from his or her peripheral temperature, indicating a potential circulatory problem.

The two devices also allow doctors to measure pulse wave velocity—the delay between when a pulse of blood emerges from the heart and arrives at the foot—which can indicate changes in blood pressure. This feature does away with the need for inaccurate blood pressure cuffs or highly invasive arterial lines.

Rogers and his colleagues have tested the wireless monitors on over 70 premature babies who also wore conventional hardware. Data analysis confirmed that the new and conventional devices are equivalent in most realms. One area where the wireless monitors excel is the spurious data sometimes transmitted when a tugged wire imparts force to a sensor.

“This paper is a masterpiece in the area of soft electronics for healthcare,” said Sheng Xu, a materials scientist at the University of California, San Diego, who was not involved in the research. “The devices are meticulously engineered, the data are validated, and the operation is compatible with the existing infrastructure in the clinics.”

Soft electronics hold promise not only for biomedical applications on the skin, but also for the brain interface, heart, spinal cord, bladder and more. The wireless baby monitors could serve as the first model use case for soft electronics, Xu said, creating a strong base for further devices to follow.

For now, Rogers and his colleagues are focusing on fine-tuning their wireless monitors for commercial manufacturing. They are also working on integrating new features, such as tracking  sleep quality, crying, and body orientation, as well as developing a platform for home settings, so parents can have greater peace of mind after taking their baby home.

The researchers are not just interested in helping babies in the United States. In April, they will launch field trials in Zambia, supported by the Bill and Melinda Gates Foundation, and they hope to deliver the wireless monitors to tens of thousands of additional patients over the next two years.

“Ultimately, we’re looking to deploy these devices in as impactful a way as possible,” Rogers said.

&nbsp;It's almost certainly cheaper to capture carbon emissions from their source—or never emit them in the first place.Matt Lucas, Carbon180