VR and Drone Technology in a Paper Airplane

VR and Drone Technology in a Paper Airplane 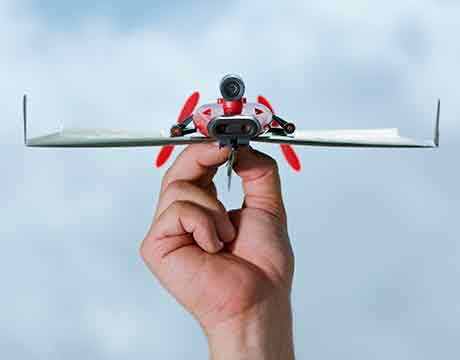 This smartphone-controlled drone lets you experience flight as if you were sitting in the cockpit of your very own paper airplane. Image: PoweUp Toys

For a different take on standard drones that fly and hover like a helicopter, consider the X FBV, a kit that combines drone technology with a paper airplane. Unlike standard drones, this very lightweight aircraft uses twin propellers positioned at the end of the craft to fly constantly like a real airplane but controlled from either a smartphone or a virtual reality headset.

The paper airplane drone is the latest model produced by PowerUp Toys, founded by Shai Goitein, a former pilot in Israel’s air force and industrial engineer. He designed a prototype after working with children and used the early forms to teach the basics of aeronautical design.

The X FBV is made of a paper template—the kit comes with four, allowing you to vary the design—to which you attach the carbon-fiber-reinforced frame. Instructions for folding are included, producing a paper airplane with about an 11-inch wingspan. The manufacturer suggests adjusting the elevator panels before attaching the flying mechanism to ensure a straight flight.

Flight is controlled through the app, compatible with iOS and Android devices, via a Bluetooth connection. Goitein says the plane acts as a mobile hotspot. Vertical sliders on either side control the speed and direction. The kit’s plane-mounted camera captures video viewed through the app, either onscreen or—through a Google cardboard FBV headset—for a pilot’s in the seat view. The camera rotates to also provide side or rear views.

Goitein collaborated with drone manufacturer Parrot, which adapted its antennae and remote control system to Wi-Fi. “It is a unique aspect of the design,” said Goitein. “You don’t need an external controller, you use your phone.”

“It needed to be simple and affordable,” said Goitein, but the device needed an autopilot system and an auto stabilizing system. “There was a challenge in simple mechanics, to be sensitive to wind.” To compensate, he credits the development of a small sensor technology.

“It is unique in that it has 10 sensors,” he said, including a compass, gyroscope, accelerometer, and barometer.

Custom algorithms work to prevent stalling and control yaw. The electronics are stored in the plane’s plastic nose cone, which has a soft plastic bumper to protect against crashes. The camera is above the nose cone.

Read More on Drones: Drone Deploys in Just Minutes but Flies for Hours

The drone can fly at speeds to 20 mph and, because it is an airplane, needs space to maneuver. There are no rudders, so the only way to control flight is through the propellers. PowerUp recommends flying the drone with a second person to act as a lookout because of a slight delay in the view, and to help locate the plane if it flies—or lands—out of range. Use the head-mounted VR device by pressing the Google button on the app and fly it by moving or tilting your head to one side or the other to turn or up and down to climb and dive.

That takes a bit of practice. “As a pilot you are always thinking of landing,” he said. “So you need to get a sense of orientation and where you are in the world.”

The plane does not have GPS but it does have a feature to return using its internal compass, allowing it to retrace the path from which it began. If it crashes, the pilot or second observer has to find and fetch it.

There was a challenge in simple mechanics to be sensitive to wind. Shai Goitein, PowerUp Toys