The Engineering Behind Brain Research

The Engineering Behind Brain Research 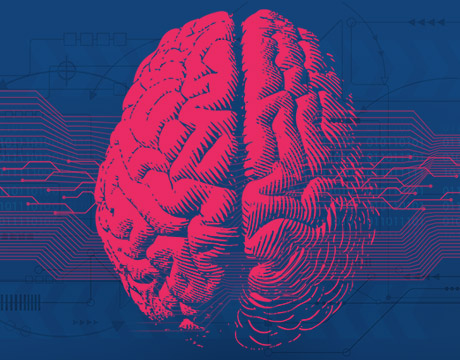 Much about the human brain remains a mystery. The effort to solve that mystery unites engineers with biologists, psychologists, and researchers from many other disciplines. While that interdisciplinary work takes many forms, more and more engineers are bringing mathematical models, algorithms, and technological expertise to the studies.

“The brain is a computing device, just not like anything we’ve built before,” said James DiCarlo, a professor of neuroscience at the Massachusetts Institute of Technology. “We have to build and describe things in engineering terms to really understand it. Not just the phenomenology of the brain, but to understand these interactions in ways you can see.”

Phenomenology is the study of consciousness, how and why we think and what we think about. It’s the stuff of philosophers. Engineers have a different role in the science of the brain—understanding and interpreting the signals it sends, such as those used to move a muscle.

If researchers understand how neurons in the brain affect function, they may be able to stimulate the brain or use some other methods to help people with neurological disorders that affect motor control such as paralysis or Parkinson’s disease.

Engineers in larger numbers are joining other scientists in brain research. Iowa State University, for example, recently unveiled its Big Data Brain Initiative. It combines faculty from the colleges of engineering, human science, veterinary medicine, and design, who will work together on brain research.

There’s also the five-year-old Brain Research through Advancing Innovative Neurotechnologies (BRAIN) Initiative, a public-private research program started by the Obama administration. The goal is to create technologies that researchers can use to form a picture of the brain that depicts how individual cells and complex neural circuits interact.

In the absence of that overall picture, researchers strive to understand big issues, such as signals that initiate and control movement. It’s easy to move a muscle, but understanding and measuring the brain-signals involved is an entirely different matter.

The signals of the brain and the muscle signals work together to move the muscle, so understanding the role of the muscle is vital to understanding how the brain controls its movement. To investigate the relationship between them, researchers in Sober’s lab studied the singing behavior of Bengalese finches.

“Lots of studies look at brain activity and how it relates to behaviors, but muscles are what translates the brain’s output into behavior,” Sober said. “We wanted to understand the physics and biomechanics of what a songbird’s muscles are doing while singing.”

The researchers used an electromyography (EMG) machine to measure how the neural activity of the bird activates a vocal muscle to produce a particular sound. An EMG measures the electrical activity of muscle during rest, slight contraction and forceful contraction.

More on Inspiration from Nature: How Elephants Use Their Tails to Chase Away Mosquitoes

Researchers in the Emory lab created a 16-electrode prototype device for this purpose, but knew they would need to expand on it to get a fuller picture into how neural signals control muscle movement, Sober says. Still, their prototype device returned some interesting findings.

“In experiments using our prototype, we discovered that, just like in brain cells, precise spike timing patterns in muscle cells are critical for controlling behavior, in this case, breathing,” Sober said.

To create a more elaborate device, Emory researchers turned to engineering expertise. They recently teamed with engineers at Georgia Tech to create a device that can record electrical action potentials or “spikes” within the songbird’s vocal muscles.

The device will record populations of spikes from all of the muscles involved in controlling a complex behavior, said Muhannad Bakir, a professor in Georgia Tech’s School of Electrical and Computer Engineering.

The device will give researchers access to the neural signals that control muscles, helping them investigate how the brain controls the body, Sober said.

A complete understanding of how the brain operates on the cellular level may still be well in the future, but engineers are helping researchers take the steps needed to get there.

Jean Thilmany is a freelance writer in St. Paul who frequently writes about engineering topics.

What’s missing is the technology to precisely record the electrical signals of the muscles that ultimately control movement. Samuel Sober, Emory Universit