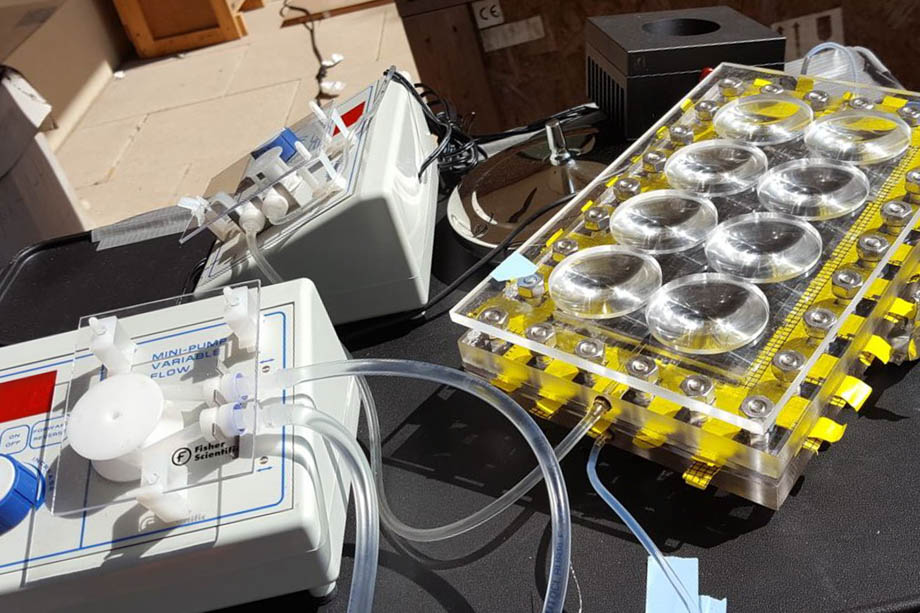 There are 16,000 desalination plants operating around the world today. These plants produce 3 billion cubic feet of fresh water. The industry continues to grow and new methods will be needed to create a more efficient process.

Researchers at Rice University’s Laboratory for Nanophotonics (LANP) proved that they could boost the efficiency of their solar-powered desalination system by more than 50 percent under ambient solar illumination without using any bulky solar concentrators.


In conventional membrane distillation, externally heated saline water flows across one side of a porous membrane while cold freshwater flows across the other side. The resulting temperature difference draws water vapor through the membrane from the hot to the cold side and produces fresh water.

This process takes additional energy merely to heat the bulk saline water. A popular approach to increase the efficiency of solar-based thermal systems is to utilize large solar concentrators to harvest more light.

LANP scientists took a different approach and started by improving the conventional membrane distillation with light-harvesting nanophotonics for converting saltwater to freshwater. They coated the top layer of these porous membranes with low-cost, commercially available carbon black nanoparticles that were designed to convert more than 90 percent of sunlight energy into heat.

Their resulting ‘nanophotonics-enabled solar membrane distillation,’ or NESMD, system does not require external heating of water.

Instead, water at ambient temperature can be flowed across the two sides of the coated photothermal membrane. When the system receives sunlight, the nanoparticles convert it to heat, thus creating localized temperature difference across the membrane drawing water vapor through it and generating fresh water.

“When you shine the light on top of our device with no lenses, you have a homogeneous temperature on the membrane, and that gives you a given amount of water,” said Alessandro Alabastri, one of the PhD researchers on the project. “Then if you get the same device with the added lenses, now you have a hotspot all around the membrane. That temperature local temperature increase gives you a higher overall freshwater output without having higher input power. This method is completely different from what is typically done today.”


After a successful proof-of-concept demonstration, the researchers decided to look at the physical aspects of the system design in a step-by-step manner. First, they focused on the key mechanism driving water evaporation: The temperature dependent pressure difference across the membrane. This vapor pressure exponentially increases as temperature rises, while the temperature generally linearly rises with the incident light intensity.

Due to the overall non-linear dependence of vapor pressure on light intensity, a given amount of input solar power can yield higher water evaporation, leading to larger freshwater production if sunlight is locally focused to generate high temperature regions on the photothermal membrane.

To test this concept, the team, including Pratiksha Dongare, Rice University School of Engineering graduate student and co-lead author of the published paper, incorporated inexpensive plastic Fresnel lenses on the illumination window of NESMD to concentrate sunlight into focal hot spots rather than employing large-scale solar concentrators to collect more solar energy.

Exploiting the inherent and previously unrecognized nonlinear relationship between incident light intensity and vapor pressure, the researchers could use the same amount of light to increase freshwater flux through light redistribution.

The Future of Optical Effects 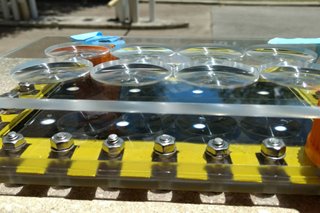 Concentrating the sunlight on tiny spots on the heat-generating membrane exploits an inherent and previously unrecognized nonlinear relationship between photothermal heating and vapor pressure. Photo: Pratiksha Dongare, Rice University
“What is really remarkable about this work is if membrane distillation behaved like a solar cell, then putting lenses on the face of it would actually reduce the efficiency and not increase the efficiency. This experiment has opened up our eyes to what the fundamental science is behind the process. We are using that same window, but you're rearranging the photons on that front face of the membrane as opposed to collecting a whole lot more photons,” said Naomi Halas, director of LANP. “The fact that there is this inherent temperature dependence, that now becomes an exponential non-linearity in terms of the intensity dependent.”

The benefit of this discovery is not just limited to desalination. Similar nonlinear optical effects could also be used to improve technologies that use light to drive chemical processes like photocatalysis or up conversion of photons in photovoltaics leading to higher efficiencies with light redistribution.

It is research like this that is taking desalination to the next level. This new advancement means that solar-based desalination systems no longer need a large infrastructure, but can be scaled in size to meet community-scale requirements.

Terry Persun is a technology writer based in Port Townsend, Wash.