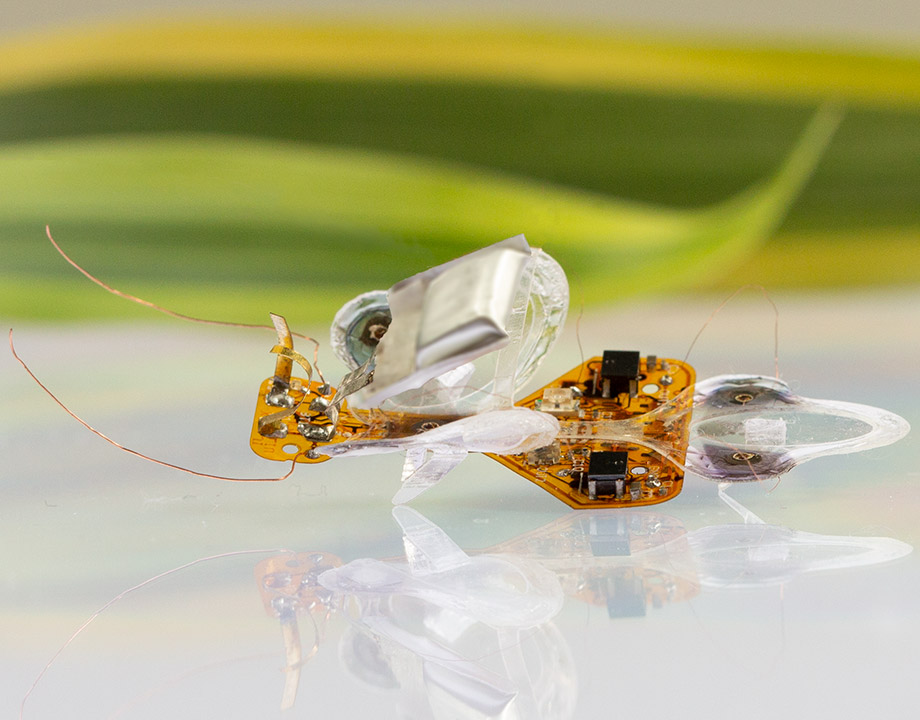 Engineers have developed an insect-sized soft robot that continues moving after being repeatedly hit with a fly swatter or squashed. Photo: EPFL

One Indestructible Bug In a Soft Robotic Body

Just like most average bugs can be taken out with a rolled up newspaper and a good snap, average robotic insects fair no better when ambushed with a similar swat: The creepers and flutterers of the mechanical world have brittle rigid elements and fragile moving parts that don’t stand up well to sudden force. But now there’s a new insect-sized soft robot that can take a swatting and will keep on moving. It’s also untethered to any external power supply.

The key to the robot’s indestructibility is in its soft body. It is, in essence, a piece of artificial muscle that contracts with the application of a low voltage. The contractions and expansions of dielectric elastomer actuators, or DEAs, push the insect along a surface, akin to an inchworm. 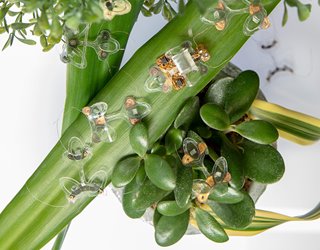 Working together in an array, the DEAnsects could make great sensors. Photo: EPFL
Herbert Shea, a professor of micro engineering who runs the Soft Transducers Lab at Switzerland’s École Polytechnique Fédérale de Lausanne (EPFL) and who co-authored the paper on the DEAnsect, has been toying with dielectric elastomer actuators for more than a decade.

“We kept saying how great they are for soft robots, because they’re stretchable, they’re soft and compliant,” he said. “The problem is that they typically require several 1,000 volts at low power, and that makes for a rather heavy power supply.”

To make the soft robot capable of carrying its own battery, Shea and his team had to get the volts down to 400, and for that they needed a thinner dielectric. “We went from 20 to 6 microns,” Shea said. “That’s the trivial part of the answer. The actual difficulty is making extremely soft stretchable electrodes that are going to be so soft that they don’t impede deformation of the elastomer when you apply the voltage.”

The team accomplished this by creating electrodes out of single-molecule thick carbon nanotubes. Their thinness allows them to be bent and to slide over each other under deformation.

Further Reading: Insect Drone with Camera Flies Like a Bee

The robot’s body now operates at 500 hertz, which translates to a speedy crawl of 12 millimeters a second. If it didn’t have to haul its own electronics and power supply, the robot would more than double its speed.

One can’t stop it by stepping on it, letting it fall off a table, or whacking it with a fly swatter. Or, more accurately, it takes a good ten or so direct hits before the robot is damaged enough to stop its forward motion. 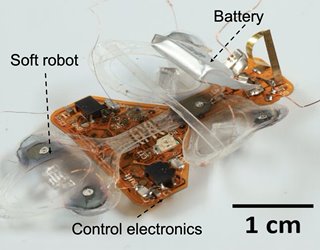 The contractions and expansions of dielectric elastomer actuators push the robotic insect along a surface. Photo: EPFL
“There’s a mechanical impedance mismatch between something non-stretchable and something stretchable. If you mechanically keep forcing it, it essentially fractures,” Shea said. “I’m pretty sure if you grind your foot on them, they will die.”

The DEAnsect’s durability could be improved by making the transition from hard parts to soft parts more gradual, for example, by using different polymers.

It could also move faster—increasing its contraction rate from 500 hertz to a theoretical 5,000 hertz—by using lower resistance electrodes to charge quicker off the capacitor. Lightening its load would help too. Right now the robot is built from off-the-shelf electronics. Having a chip made with just the essentials would cut the weight, but “it would set you back a few $10,000,” Shea said.

Another way to speed it up would be to completely revamp the bug’s architecture. In future versions Shea plans to use “little stubby feet that can actually walk with a more walking type motion.” Such a robot would be able to go forward and backward, instead of just forward.

In its current incarnation, the applications for unswattable DEAnsects are limited. “There are cool things you can do in terms of exploring,” Shea said. For instance, working together in an array, the robots could make excellent sensors.

But Shea has his sights on a different robotic animal: “My long-term goal is an octopus tentacle that could solve a Rubik’s cube. We are a long way from that, but having good enough soft actuators takes us one step toward a very dextrous, intelligent, sensorized, robotic arm.”