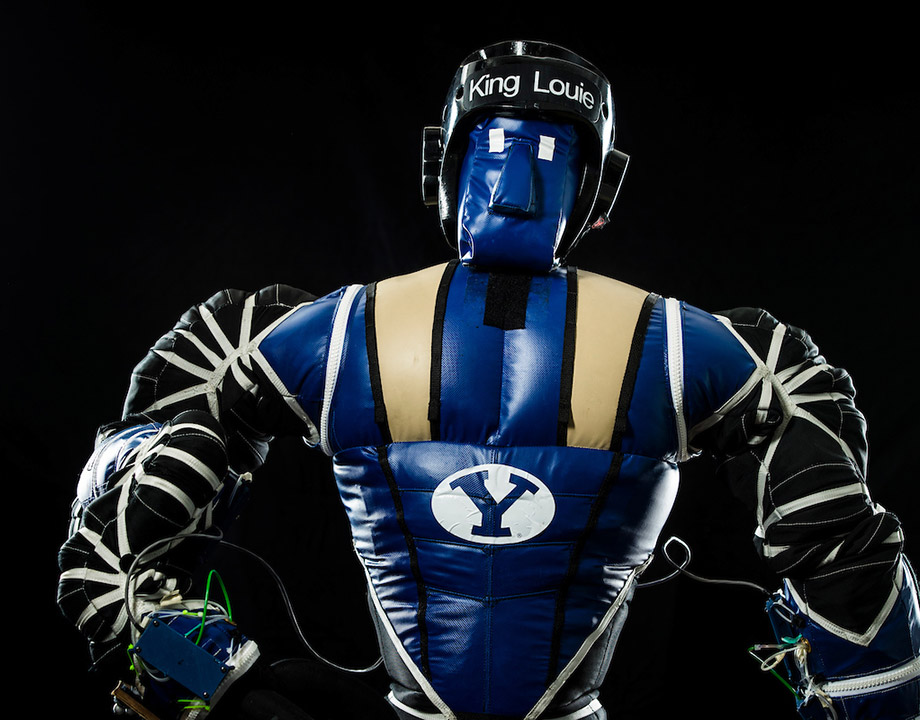 Engineers are programming inflatable robots so that they can be used in everything from space research to home care. Image: Brigham Young University

NASA scientists are eager to build soft, flexible, lightweight robots to help with future space exploration. “Soft robots have many benefits for space exploration, particularly since the constraints in NASA missions are very restrictive in terms of size, weight, and power,” said Robert Shepherd, professor of mechanical and aerospace engineering at Cornell University. “The radical volume and stiffness changes that soft robots can undergo means they can start off very small and inflate with gas to become stiffer—dramatically impacting the size and weight components. Imagine sending an uninflated party balloon into space and then blowing it up to 100-1000 times its volume and having it walk around and do work for you.”

Another benefit of inflatable robots is safety. Because they likely will work beside astronauts, or deploy sensitive equipment, soft robots are less likely to do damage in the event of unintended contact or collision compared to hard, heavier robots.

Soft robot prototypes depend on an abundant and inexpensive substance to function—pressurized air.

At NASA’s Langley Research Center, researchers are developing soft actuators to control a soft robot’s motion. The actuators are made from silicone and have internal air bladders. These chambers expand or compress based on the amount of air pumped through them, controlling the movement of the robot. “By adjusting the amount of air in the chamber of the soft robotic actuator, the robot can flex and relax, just like a human muscle,” said NASA in a recent statement. 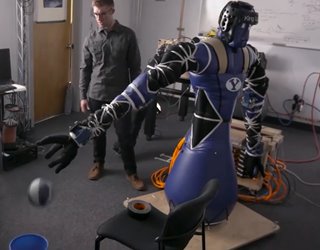 King Louie, an inflatable space robot, throwing a ball into a basket. Image: Brigham Young University
This research is vital to understanding four key properties of actuators—mobility, joining, leveling, and shaping—and how these can be used in space exploration. “For example, joining is vital to understanding how robots can interlock and link together,” said NASA. “Two soft robots could connect together to produce a large temporary shelter. Shaping can add strength to a material by pressurizing it using the air bladders. The actuator can get the soft robot into a position where it can be locked into place, using a jamming technique. This technique can be used to passively strengthen another structure, like a dust shield.”

Recommended for You: NASA’s ISS Open for Business

Harvard researchers are also designing soft robots using pressurized air. Different-sized tubes control how quickly air moves through the robots; the size of the tube determines where and how the air flows for a particular function, such as crawling or walking. The approach of using pressurized air replaces the complexity of multiple systems with a single input. Other benefits are reduced weight and fewer components for powering the platform.

“Before this research, we couldn’t build fluidic soft robots without independently controlling each actuator through separate input lines and pressure supplies and a complex actuation process,” said Nikolaos Vasios, lead engineer on the project. Now, we can embed the functionality of fluidic soft robots in their design, allowing for a substantial simplification in their actuation.”

At Brigham Young University, NASA is building an inflatable space robot named “King Louie,” which is “essentially made up of bags of air, surrounded by a fabric shell that is really strong,” said Mark Killpack, a BYU professor of mechanical engineering. Like other soft robot prototypes being developed, Louie’s motion is controlled by inflating or deflating different air chambers in its limbs. For instance, inflating a chamber on the bottom of its arm makes the arm move up; inflating a chamber on the top makes the arm move back down.

NASA hopes Louie will be an effective alternative to traditional robotic space equipment that is far heavier and more complex, and therefore, more prone to malfunction or failure. Soft robots can be launched into space in a deflated state, thereby occupying far less space and reducing overall weight of the payload, conserving fuel. “Fluid-driven robots can be beneficial because when you release the fluid—air, in this case—the robot collapses down to much smaller size for storage or transport,” says Killpack. 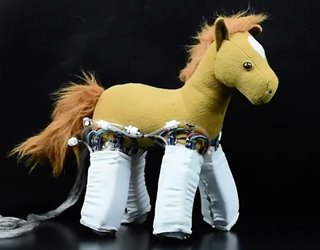 Researchers wrapped robotic “skins” around the legs of a plush toy horse to turn it into a moving robot. Image: Yale University
Soft robots may one day be wrapped in highly sensitive robotic skins loaded with sensors. This type of “robotic skin” technology is being developed at Yale University by Rebecca Kramer-Bottiglio, assistant professor of mechanical engineering and materials science. The flexible, elastic skins are embedded with sensors and actuators. When placed on a deformable object—such as a soft robot—the skins can animate these objects. The makeshift robots can perform different tasks, depending on the properties of the soft objects and how the skins are programmed and applied. Combining multiple skins enables more complex, multifunctional movements. “We can get combined modes of actuation, for example, simultaneous compression and bending,” said Kramer-Bottiglio.

Kramer-Bottiglio developed the technology through a partnership with NASA, which was excited about the possibility of astronauts accomplishing a variety of tasks using the same reconfigurable material. Having robotic skins on board, too, would give astronauts the opportunity to create multifunctional robots as needed such as applications or tasks that had not been considered when the mission was designed, or for emergency situations.

Surprises almost always occur in space travel, however carefully the mission is planned.

“The question is, how do you prepare for the unknown unknowns?” said Kramer-Bottiglio. “One of the main things I made sure to consider was the importance of multifunctionality, especially for deep space exploration, where the environment is unpredictable.”

Mark Crawford is a technology writer.