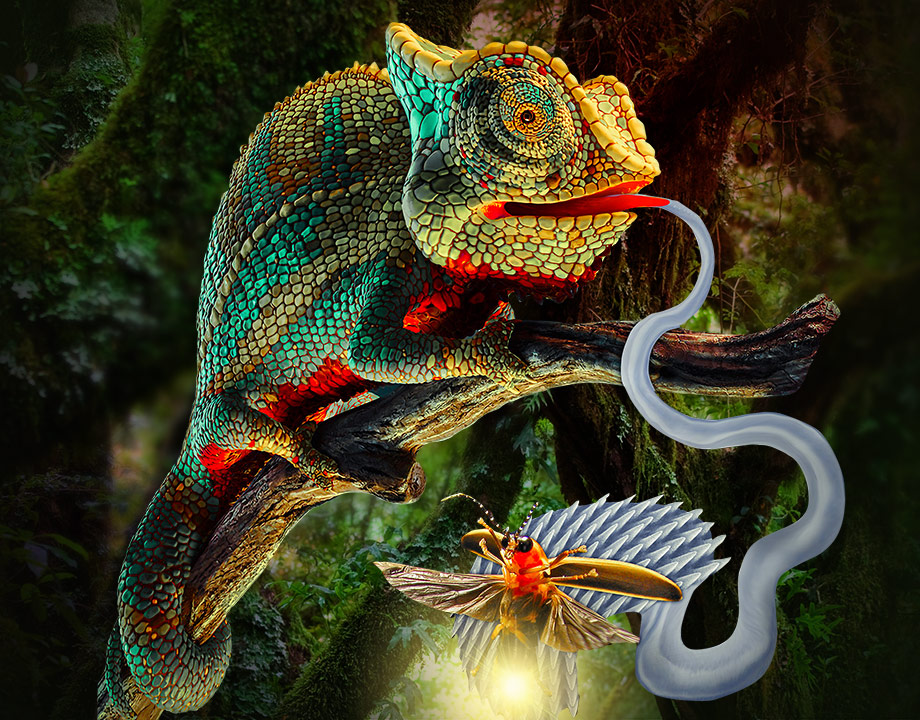 A new soft robot can stretch out and grasp a bug in just one-tenth of a second. Image: Ramses Martinez, Purdue University

A high-speed soft robotic “tongue” can spring out to five times its original length, snag a beetle crawling on the ground, and bring it back in just 120 milliseconds—less time than it takes light to travel around Earth’s equator.

Based on the tongue of a chameleon, this device has a combination of lightning-quick speed, large amplitude motion, and precision that is unprecedented in soft robots. It is part of a new lineup of soft robots from Purdue University that, in some ways, resembles a team of comic book superheroes, each with a unique talent inspired by real-life creatures.

Those capabilities, including the tongue’s high-speed extension, result from a new way to store elastic energy in the robot’s structure, said Ramses Martinez, an assistant professor of industrial and biomedical engineering. 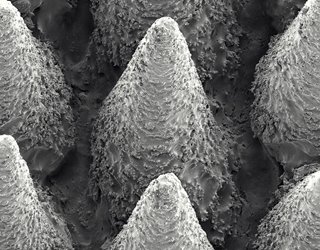 Tiny spikes on the edge of the soft robotic tongue can capture a beetle walking on the ground. Photo: Erin Easterling, Purdue University
Soft robots, he explained, have a reputation for being weak, slow, and generally inferior to traditional machines. One reason is that the elastic materials used to impart motion are semi-permeable and lose pressure over time. Engineers overcome this by continuously pressurizing them, but that takes power and lots of little mechanical parts that defeat the purpose of a soft robot.

To solve the problem, Martinez’s lab closely studied the elastic structures—the interfaces between muscles, tendons, and bones—in animals. He even looked at the tendrils of climbing plants like ivy to learn how they defied gravity to grasp for nearby footholds.

Recommended for You: Robotic Worm to Navigate Through Human Brain

“It wasn’t just a challenge of engineering, but of imagination,” Martinez said. “The real challenge was translating the working principles of different animals into a structure that doesn’t have any bone, yet mimics a skeleton.”


His solution for powerful bots uses a composite elastic structure. It begins with placing a pre-stretched elastomeric polymer into a 3D-printed mold, then layering it with a non-stretch material such as paper or fabric.

The layering process restricts the tension between the stretched material and the non-stretchable material, much like the structure of a tendon and a bone. All it takes is application of a small pneumatic force to release the elastomer’s pent-up energy. 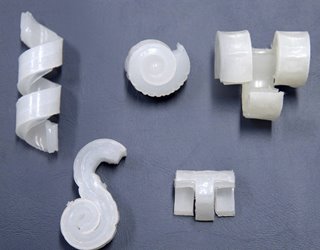 A variety of 3D-printed soft robot structures that combine extension with power. Photo: Purdue University
In the case of the chameleon-inspired tongue, the mechanism acts like a spring, using the unleashed tension to propel outward. It immediately regains the lost energy on impact with the beetle, which it then uses to recoil to its original form.

It does this all without crushing the bug. The tongue’s end is coated with tiny microspikes, which create enough friction to latch onto the beetle. Of course, beetles were an intentional choice, Martinez admits.

“We chose them because they are difficult to squish,” he said. “Great for testing. It was also really funny to ask my students to go catch flying beetles for the robot.”

The Martinez lab’s designs mimic a Venus fly trap, closing rapidly on a bug exploring its surface; the foot of a three-toed woodpecker, which can perch at 116 degree angles without losing its grip; and the body of a snake, whose helical structure can pick up and place an object without dropping it. All of the designs can be modified for speed, strength, and precision based on the level of elastic energy stored in their structures.


The team also demonstrated that the robots can store enough energy to hold up to 100 times their body weight. Martinez hopes to show the technology’s power to the manufacturing industry, which has almost given up on soft robotics altogether.

Martinez envisions the techniques being used in industrial settings, giving machines the ability to quickly grasp objects without harming them; or in wearable devices, giving surgeons the ability to retrieve a tool when operating without hurting the patient.

You May Also Like: Soft Robots Are Essential for Future Space Exploration

Another exciting aspect of the designs is that they can be prototyped rapidly using a 3D printer and made from biodegradable elements. This makes soft robots both cost-effective and environmentally friendly, which more and more manufacturers have been looking for.

Meanwhile, the team is looking forward to developing new capabilities and perfecting the precision of the robots.

Cassie Kelly is an engineering and environmental writer based in Ohio.