Research assistant Ryan Kozak adjusts sensor that determines when water crystallizes to ice. It may be useful in deicing airplanes and wind turbines. Image: UBCO

Some 25 million gallons of deicing fluid are used every year to keep ice off airplanes at U.S. airports. Keeping ice off of wind turbine blades can be more difficult. If not fitted with internal deicing systems, helicopters may have to spray hot water on the blades in place at no small cost. Both measures could be minimized if we knew exactly when ice was forming on blade or wing.

Now, researchers at the University of British Columbia Okanagan have created a microwave detector that can alert operators exactly when water has gone crystalline. “Basically, what we do is we create structures that produce high electric and magnetic field density around them,” said Ryan Kozak, a research assistant at the university’s OMEGA Lab and lead researcher on the project. “Then we can use those fields to detect changes in material properties.”

Kozak’s sensors essentially test a substance’s permittivity, or the ease with which its molecules can rotate in the presence of an electric field. Water has a permittivity rating of 80. When it freezes, that number drops down to 3.2. “Which is a massive shift,” said Kozak. “And that’s easily easily detectible with these electric fields.” 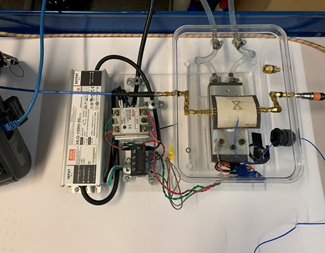 Sensor is connected to readout circuit with cable, but researchers will replace the cable with an antennae. Image: UBCO
The sensors were designed and fabricated in the OMEGA Lab. After masking a copper substrate, they are put in a chemical bath to etch away the unwanted copper. The choice of substrate is crucial. Its permittivity should be as close to that of air as possible (1.0006). if it’s too high, the electric field will be trapped in the substrate. “So you’re not doing a good job sensing,” said Kozak.

Similarly, the sensors need to work with the same coatings that are on the structures where they will do their sensing “or else we might get different icing conditions compared to what’s actually happening,” he said. He recently demonstrated that coatings do not inhibit the sensors’ ability to detect ice. Right now the sensors require two coaxial cables to and from the readout circuit. Kozak is hoping to cut that down to one by using patch antennas in the near future.

Though there is still testing to be done before the sensors are deployed on wings and atop turbines, they are likely to soon be cutting down on the effort, cost, and environmental impact of deicing in its current state.

“In cold weather in Canada, you have to spray your airplanes with deicing fluids before takeoff. And these deicing fluids are rated for a specific amount of hold over time,” explained Kozak. Depending on the weather conditions, a plane might need to take off within 30 minutes of being sprayed, or it will have to be sprayed again. “So instead of relying on this holdover time, you could say, ‘Well, the sensor doesn’t say there’s any ice so let’s just take off.’ ”

The sensors have many applications beyond the aerospace and wind turbine industries. They have a place anywhere you might want to know if ice has formed, including sidewalks, refrigeration systems, and weather monitoring, even ocean-going vessels. Kozak has demonstrated that, with some significant modifications, the sensors could work in salt water.

“The next steps are prototyping, putting them it into the environment, and just seeing what happens,” said Kozak. “We expect some issues, but nothing we’ve run into so far has given any indication that this isn’t going to work.”

Michael Abrams is an independent writer in Westfield, N.J.