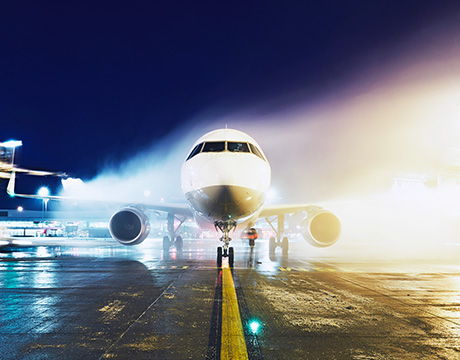 Deicing of the airplane.

Ice Stripes Could Mean the End of Frost on Airplanes, Cars, Wind Turbines

Jack Frost is a hoodlum. Every year we spend billions on heat and de-icing chemicals to rid our planes, cars, wind turbines and heat exchangers of his handiwork. And it’s not just the money. Both the chemicals and the extra heat come with environmental consequences.

Now researchers at Virginia Tech have created a new method for ridding our surfaces of ice. It requires no energy for heating and produces no chemical runoff. With the right patterning, they’ve shown, surface ice can easily be kept at bay.

“People think that when you have condensation, dew droplets on a surface freeze in isolation,” said Farzad Ahmadi, a graduate research assistant at the university’s department of biomedical engineering and mechanics. In fact, thanks to the difference between the vapor pressure of water and ice, water is attracted to ice. “When one of the droplets is frozen, it harvests water from its neighbor in condensation. We call it ice bridging.”

Ahmadi and his colleagues decided to try to exploit this phenomenon. They created a pattern of stripes on a water-loving hydrophilic silicon dioxide material. When they lowered the temperature the water turned to ice on the stripes. Since this ice then attracted the water from the rest of the surface, the spaces between the ice stripes were dry.

“It was kind of surprising because those ice stripes were enough to evaporate all the condensation between the ice stripes,” he said.

But there were two problems with this initial approach. As the ice grew, it would expand into the dry areas. And the hydrophilic material they used using is not exactly eco friendly or cheap to produce.

For You: No BS: Engineering Elephant Dung to Help African Farmers

Ahmadi tried an approach that would require no extra material. On a sheet of aluminum he created a pattern of elevated grooves. Dew drops, it turns out, prefer to form a nucleus on sharp edges. So when the temperature dropped, ice first formed in the grooves. Any water vapor between the grooves was then frozen onto the existing ice stripes, above the substrate of aluminum. This left the space between grooves completely free of frost. With the elevated stripes covering a mere 10 percent of the surface, the technique left 90 percent dry.

“Researchers have tried to overcome frost using some kind of special chemical,” Ahmadi said. “It was kind of surprising that we could just use ice to fight ice.” Unlike salt and other frost-busting chemicals, ice doesn’t dilute over time. If anything, it gets stronger at attracting moisture as it grows.

Of course, the ice on stripes still expands above the dry surface, but it is easily removed. “If you have very high humidity and a very cold environment, you will wake up and go to your car and you will see that your windshield is covered in frost,” Ahmadi said. “But if you turn on your engine and just move, the wind can shed off the ice, because it has a very low adhesion.”

The patterned surface could be a boon to airlines—and travelers—but there’s work to be done before ice falls off a plane’s wing with a tap.

Ahmadi and his colleagues will first have to determine how the patterning would alter a wing’s lift and drag. A coating for car windshields, on the other hand, would be simple to produce. And there’s no reason HVAC manufactures couldn’t take advantage of the technology right away. Ahmadi is also experimenting with different patterns: concentric circles seem superior to stripes. Exactly why that is, at the moment, remains unclear.

For Further Discussion
It was kind of surprising that we could just use ice to fight ice.Farzad Ahmadi, Virginia Tech