Robots Programmed to Work Like Ants Get Job Done

Robots Programmed to Work Like Ants Get Job Done 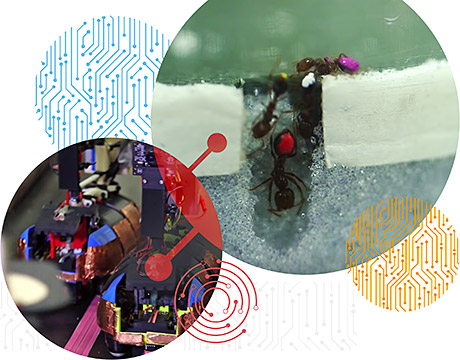 Researchers use an optimization strategy on robots to avoid clogs and finish the work with the least amount of energy.

Robots have long borrowed from nature for locomotion. They fly like bees, run like cheetahs, and bounce like galagos. But as they advance and begin to work more closely together on certain tasks, robots will have to imitate nature’s industrious strategies as well, especially if we want them to perform as efficiently as possible.

For instance, a swarm of robots expected to quickly dig a tunnel will need to know the ant method for staying out of each other’s way.

Daniel Goldman, a professor of physics who runs the Complex Rheology and Biomechanics Lab(or Crab Lab) at the Georgia Institute of Technology noticed that even though ant tunnels are extremely narrow, they never get choked up with too many workers.

“We wanted to know what they do when they’re digging, how they decide how to dig if there’s no central leader,” Goldman said.

For You: Racism Runs Deep,Even Against Robots

To find out, the team gathered 30 fire ants, put dots of different colors on their abdomens, placed them in a container of wet glass particles, and watched them dig. The team presented its results in a recent issue of Science.

The ants didn’t play tag team, work in alternating groups, or take turns in any other fashion. In fact, their strategy was quite simple: A handful of the ants (about 30 percent) did the work while the majority did nothing.

“Very few were doing any of the labor,” Goldman said. “Over 48 hours, with a group of thirty ants, half never came to the tunnel.”

When his team removed the five hardest working ants, five more stepped up to the plate to carry on the digging.

The strategy of minority servitude served the ants so well that Goldman decided to try it on a group of robots.

The robots, essentially oblong shells on wheels, resembled armadillos more than ants. Researchers placed them in a narrow channel with plastic balls on one end that served as the soil. The robots would roll over to the balls with the intention of grabbing them, moving them, and releasing them with their gator-like jaws. Push switches on their shells would alert them to the presence of their fellow workers.

Researchers programmed the bots to follow one of the three strategies for removing the balls: “eager,” “reversal,” and “lazy.”

Eager robots simply tried go to the dig site as much as possible without interference from their comrades, regardless of how many other robots were already there. That strategy generated a lot of traffic jams. “When we applied the eager strategy, the robots would grind against each other and suffer a lot of breakage,” Goldman said.

Reversal bots would turn around and leave the site if they encountered other workers, but would soon return to try again. Lazy robots were largely inactive and would only head to the site to dig occasionally.

When reversal-minded robots approached the balls and found another robot already at work they would turn around. This proved a relatively efficient scheme with no grid lock, but the work progressed slowly. The lazy, ant-imitating robots, however, proved to be the fastest at completing the task.

That strategy could be essential for tomorrow’s hordes of rescue bots. “Future swarms of robots that are moving through a complex environment after a natural disaster, or when a building has collapsed, will be getting in each other’s way,” Goldman said. “This is a story about how to work with uncertainty and unpredictability.”

In theory, robots that talk with each other could take turns or replace robots that lose power or wear out. “But then you have to know what everyone else is doing,” Goldman said. This would require the technology and the programming for higher levels of communication. (As it happens, no one knows how ants chose which 30 percent does the work.) But having “lazy”, autonomous robots, could keep things lean and efficient.

For Further Discussion
Over 48 hours, with a group of thirty ants, half never came to the tunnel.Prof. Daniel Goldman, Georgia Tech