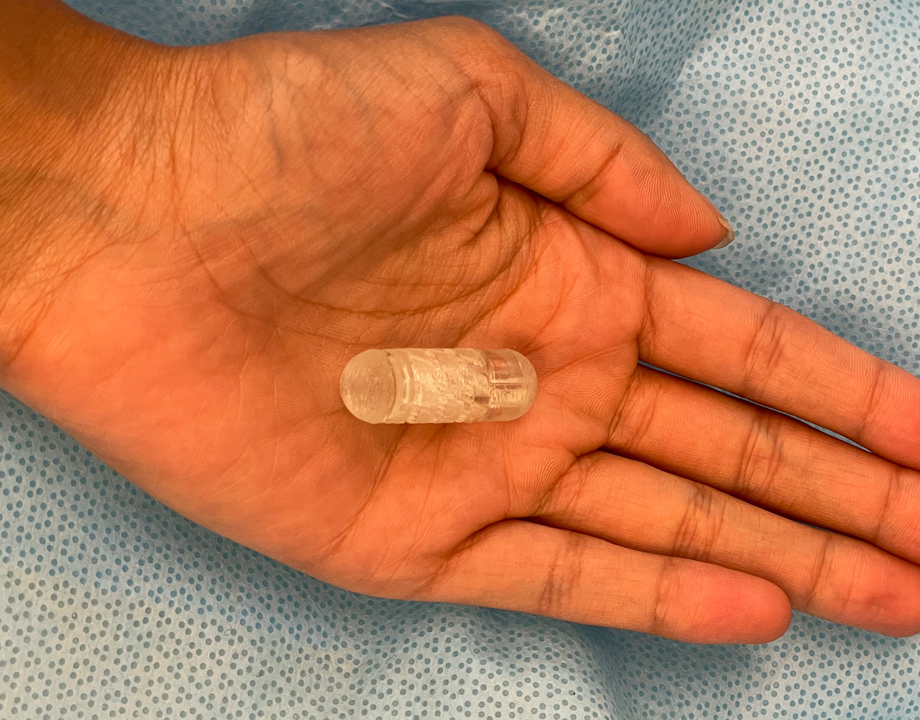 Researchers have developed a pill capable of burrowing through the mucus in the gastrointestinal tract, creating new possibilities for certain medications.

Mucus is lovely stuff. Lining the stomach and intestines, it smooths the progress of food and helps keep pathogens at bay. Unfortunately, this protective layer also inhibits the absorption of drugs made of large proteins, such as insulin. This is why diabetics still have to inject medication rather than pop a pill.

Thanks to a group of engineers at the Massachusetts Institute of Technology (MIT), there is now a robotic pill capable of working through the mucus layer in the GI tract in order to get closer to intestinal lining where drugs can better be absorbed.

The idea first came to Shriya Srinivasan while watching videos of large tunneling machines, such as those “that build subways and automatically extract and transport dirt and clay,” she said. “Then I’d been thinking about the problem of drugs getting trapped in the mucus layer and not being able to be absorbed sufficiently.” Srinivasan is a junior fellow at the Society of Fellows at Harvard University, a postdoctoral fellow at MIT, and lead author of the paper, “RoboCap: Robotic mucus-clearing capsule for enhanced drug delivery in the gastrointestinal tract,” which appeared in Science Robotics in September.

To make a tunneling drug delivery robot at a swallowable scale, Srinivasan turned to a familiar architecture. “The pill shape was a natural geometry for us to use, given that people already consume them,” she said. “It gives us a hollow cavity, inside which we can place components. Then, of course, it has nice, rounded edges that make it easy to swallow and travel through the tract.”

Those components include a battery, a motor, and an offset weight at one end. “That creates a teeter-totter effect. We optimized that movement and leveraged the imbalance to get the pill to rotate,” said Srinivasan. The entire capsule is coated with a special material that can be tuned to dissolve at a specific pH. When that happens, it triggers the on switch for the robot, which begins its gyrations. 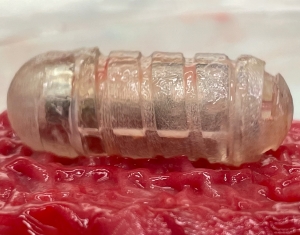 A team of engineers has developed a robotic pill capable of working through the mucus layer in the gastrointestinal (GI) tract in order to get closer to intestinal lining where drugs can better be absorbed. Photo: Massachusetts Institute of Technology
The payload sits in the capsule tip, opposite the offset weight, and is released as it is worn away against the mucus by the pill’s rotation. The team tried several exterior textures for the capsule, including spirals, helixes, and studs, testing them in Petri dishes of pig mucus and small intestine. In the end, a helix was deemed superior for rotation and burrowing. Small studs, 800-microns tall, also cover the surface of the capsule, helping it to wick away mucus and cling to intestinal walls. “Almost like Velcro,” said Srinivasan.

The pills were administered to pigs, who absorbed the drugs the capsules delivered better than when they ingested non-spinning control capsules. The tests not only demonstrated the effectiveness of the RoboCap as a superior drug delivery service, but also proved the device’s safety. The thin mucus layer (a millimeter in the stomach, 100-150 micrometers in the intestines) is known to quickly regenerate. Tissues from the animals that swallowed the capsules showed no signs of inflammation when compared to untreated samples.

Despite this in vitro success, the research is just beginning. At the moment, there are only a few dozen assembled RoboCaps in existence. To make a pill that can be used in humans, plenty of work remains.

“We’re certainly working on miniaturizing the components,” said Srinivasan. “And finding partners to work with us to further develop and scale the RoboCap to translate it from the lab into the real world.”