Nanorobots the size of blood cells would move through the bloodstream to deliver drugs to cancer location.

Biomedical Engineering Robotics Technology and Society
Many incredible cancer-fighting drugs and treatments have been developed in the past few decades, and on paper, they seem like they hold the cure. Because of the way the human body is designed, however, the drugs have a difficult time actually reaching the cancerous site. Mechanical and Process Engineering Professor Daniel Ahmed at ETH Zurich in Switzerland, hopes to solve this challenge with nanorobots, tiny vehicles that can carry the drug right to the cancer.

The nanorobots aren’t what one might imagine when thinking about traditional robotics. They are made out of a biodegradable polymer, which are commonly referred to as microbubbles, that would burst and dissolve upon reaching their destination, releasing the drug. However, because they respond to the acoustic waves produced by ultrasound or a magnetic field they are considered robots and can be guided through the bloodstream using technology that is both noninvasive and familiar.

“The goal is to actually inject these robots into the body,” Ahmed said. “We want to deliver the drugs very locally so that patients don’t have any side effects.”

More for You: Virtual Reality at the Nanoscale

Side effects are a major concern in cancer treatment, typically because the medicine is injected into the bloodstream without any real goal but to kill cancer. The medicine often riddles the body causing hair loss, fatigue, nausea, and more. But, with Ahmed’s approach, the medicine would be delivered straight to the source, sparing the rest of the body from the drugs. 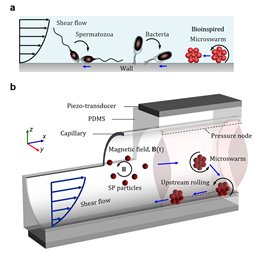 Nanobots may move upstream using acoustics or magnetics to find cancer location. Image: ETH Zurich
The self-assembled robots are slightly larger than red blood cells and can execute upstream motion against the bloodstream, as high as 1.2 mm per second. By studying various particle sizes and how they respond to ultrasound frequencies, he was able to pinpoint just the right diameter the nanorobots need to be in order to trap, or hold, them onto the outer wall of the blood vessel. Once trapped, he is able to push the bots along to the precise location of the cancer. Then he gives them a little shake and they release the drugs.

This technique could be especially useful for cancers like glioblastomas, which are typically found in the brain, but can also appear in the spine. Glioblastomas are large, rapidly growing tumors that leach fluid into surrounding tissues, otherwise known as interstitial fluid flow (IFF). IFFs cause intense pressure and there is no effective treatment option that can overcome it, making glioblastomas the deadliest form of cancer.

Early results on zebrafish embryo animal models are promising. But Ahmed explained that zebrafish embryos, although genetically similar to humans, have a very simple and soft structure. Therefore, the next phase of testing must be done on mice, which have a much more complex and rigid structure.

“Unfortunately, the vasculature of the mouse brain is super complicated,” he said. “Initially, we thought navigating our robots would be easy, but it's quite difficult. Frankly speaking, this is the hardest area to reach in the whole body of the mouse.”

“Getting a lot of data in the microrobotics field is currently difficult,” Ahmed said. “Of course you can rely on a simulation, but the problem then is reliability.”

Ultimately, Ahmed wants to make sure he is using technology with which medical professionals are already familiar. This would make the procedure inexpensive and accessible.

“This kind of technology shouldn’t be reserved for the wealthy,” he said. “Everyone should benefit from it.”

Ahmed and his team will now move forward with mice studies and testing their technology in a range of environments in the body. He hopes to release more work this year and has an aggressive timeline to get to human trials in the next four to five years.

Cassie Kelly is a technology and engineering writer based in Columbus, Ohio.