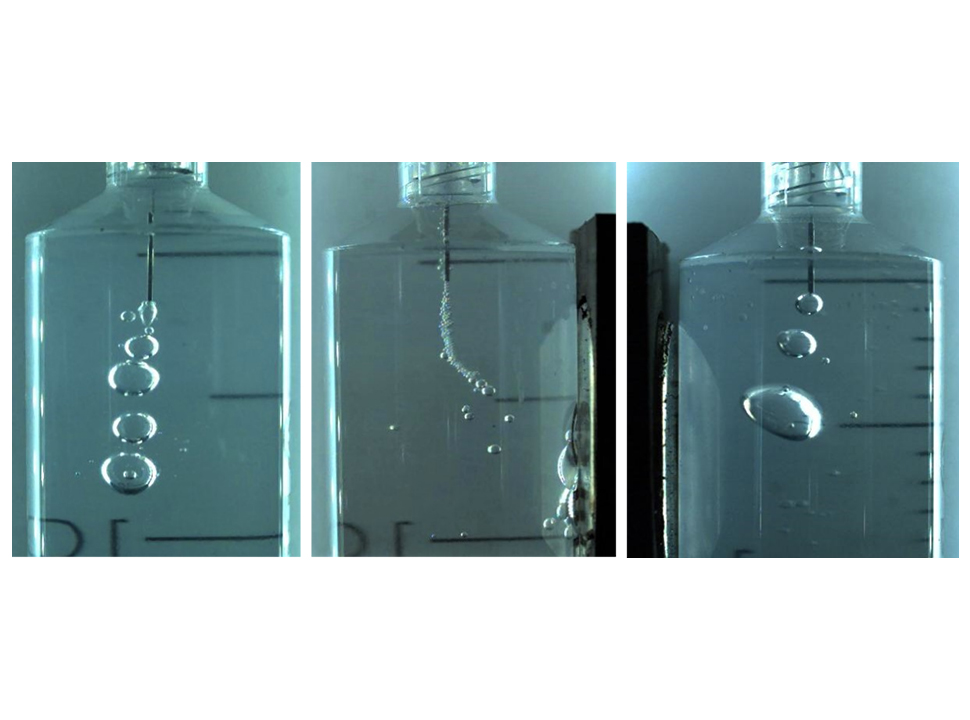 Heavy oxygen generation assemblies could be a thing of the past in space as a professor has created a way to separate oxygen from water molecules and hydrogen with just a $5 magnet.

Aerospace Energy Technology and Society Water and Sewage Systems
Breathing in space is heavy business. On the International Space Station, keeping oxygen in the air for astronauts means drawing it from water using a system called the “oxygen generation assembly.” In short, an electrolytic cell splits the water molecule into oxygen and hydrogen. The trick then is to get the oxygen out. On earth, the oxygen bubbles would just rise to the top and float away. But in microgravity, it’s another story.

“You don’t experience buoyancy in space, so when you have a mixture of gases and liquids the mixture just remains as it is—the gases float inside the liquid,” explains Álvaro Romero-Calvo, a professor of aerospace engineering who runs the Low Gravity Science and Technology Lab at Georgia Tech. To separate the oxygen from the liquid, the ISS uses a centrifuge, a hefty item to haul into orbit, and a large consumer of power where power is precious.

That’s all well and good when you’re just 254 miles from the Earth’s surface. But for longer journeys, reliability becomes a critical factor, and that means more spare parts and an increase in the overall mass of the system. “If you want to use the same architecture on a trip to Mars, for instance, the mass that you would need to bring would be so large that it would make more sense to just bring the oxygen in tanks,” said Romero-Calvo, “which is not a nice, elegant, technical solution at all.”

Romero-Calvo has come up with a solution that is simpler, lighter, and far more elegant: drag the oxygen out with magnets.

Liquids, and the bubbles within them, are very weakly magnetic (with diamagnetic and paramagnetic properties). Here on the surface, the pull of the Earth is too great for any magnet to make use of this factoid. But without the interference of gravity, a small dime store magnet is enough to do the job, as Romero-Calvo spells out in his paper “Magnetic phase separation in microgravity,” which came out this August in Nature’s npj Microgravity.

“We use a very, very small magnet—something that you can buy for five bucks,” he said. “If we brought a magnet like that to the ISS, it could perform phase separation on a wide variety of small fluid vessels without any need of filters or centripetal forces.”

To prove the power of a magnets for pulling oxygen, Romero-Calvo took his experiment to ZARM, the University of Bremen’s drop tower designed for experiments in microgravity, and let it fall.

During descent a vial of liquid was injected with bubbles. Next to this vial was a small magnet, which attracted the bubbles within seconds. “The first day we had an experiment working on the tower there were some engineers there with us who had been there for 20 or 30 years,” said Romero-Calvo. “They were in the control room of the tower with a live feed of the system. And they couldn't believe what was happening: that a simple magnet that could have such a significant effect on a fluid. That was very rewarding for me and for my team.”

The magnet/bubble setup will soon be sent up on a rocket for a longer experiment. “And then the next step is obviously ISS,” said Romero-Calvo. Already NASA is looking at proposals for different applications for such a system. And Romero-Calvo believes this, and other similar phenomena, could have a use elsewhere, like in nuclear submarines, which stay submerged for months at a time.

“A lot of people have reached out to us for clarifications and for potential collaborations,” he said. “So yeah, it is a fun time for me right now. For sure.”