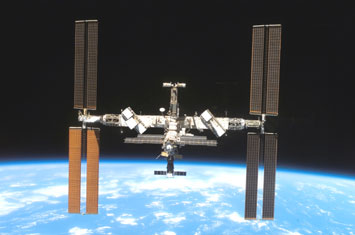 Oxygen for the crew of the International Space Station is supplied through an on-board electrolysis system.

It was a moment that bordered on catastrophe: A fire aboard the Mir space station in 1997 almost caused the loss of the orbiting platform and the deaths of its crew. With their route to an escape capsule blocked by the flames, the crew could only watch as the fire licked at the aluminum hull before dying out after 14 minutes.

That fire was traced to an on-board oxygen generator. The generator relied upon an exothermic chemical reaction to create a breathable atmosphere for the crew of the space station.

The successor to Mir is the International Space Station. It too has an on-board oxygen generator, though of a radically different design. The generator operates on a simple principle— electrolysis, the dissociation of oxygen and hydrogen from water through the application of electricity. What makes the generator safe? The device uses a proton-exchange membrane (PEM) to separate the generated hydrogen and oxygen.

In a PEM electrolyzer, water is oxidized at the oxygen electrode, or cell anode, to produce oxygen gas, releasing hydrogen ions (protons) and electrons. The hydrogen ions migrate from the cell anode to the cell cathode, or hydrogen electrode, under the effect of the electric field imposed across the cell, while the electrons are transferred by a dc power source. The protons and electrons recombine at the cell cathode to produce hydrogen. Liquid water is also released at the cathode due to a process called electro-osmotic drag. Oxygen and hydrogen are generated in a stoichiometric ratio—two volume units of hydrogen for every one of oxygen—at a rate proportional to the applied cell current.

Most of the design elements used to produce a water electrolysis cell stack were originally developed during the 1980s for submarine-based life support systems. An advanced cell design was built by Hamilton Sundstrand in the 1990s that permitted high-pressure gas generation without the need for a pressure vessel or complex pressure control system. A sintered powder metal porous plate provided structural support to the electrolysis cell membrane while operating at high differential pressure, simultaneously allowing fluid transport both to and from the bulk water stream and the electrode surface.

The result of this unique design was a greatly simplified fluid system, with only the oxygen fluid circuit maintained at elevated pressure. Although the requirements called for 6,000 hours of operation, a single cell assembly operating at nominal recharge conditions operated in the laboratory for over 54,000 hours—making this sort of high-efficiency oxygen-generating system ideal for the International Space Station. Installed in 2006, the system employs a 28-cell liquid cathode feed PEM electrolyzer operating at a current density of only 200 amps per square foot to produce oxygen at ambient pressure with 80-percent efficiency.

What's more, because the power from the photovoltaic cells rises and falls with the station's day-night cycle—53 minutes of daylight followed by 37 minutes of darkness—the cell stack can switch rapidly into a standby mode where its electrical draw drops by 97 percent. Because it's critical to get as much use as possible from the water, the water-hydrogen mixture exiting the cell stack is spun in a rotary device that separates the two components. Water recirculates through the loop to a heat exchanger to reject waste heat from the process before returning to the cell stack.

The International Space Station is not the only orbital destination where this technology can be used. A high-pressure vapor feed electrolyzer was recently designed, built and tested as an alternate propulsion system for advanced satellites. The “Water Rocket” can electrolyze water using power from the vehicle's solar array to charge storage tanks to 2,000 psia. When required, the high-pressure gases can be delivered to a hydrogen-oxygen thruster array to provide orbital reboost and maneuverability to satellites to improve their useful life, extend their capability and enhance their overall versatility.

Fuel cell-powered vehicles hold the promise of reducing greenhouse gas emissions from the transportation sector, provided the hydrogen fuel is produced from a renewable energy source, such as a high-pressure water electrolyzer operating from wind, solar or nuclear power.

[Adapted from “Backwards Runs the Reaction” by Robert Roy, for Mechanical Engineering, April 2008.]

Most of the design elements used to produce a water electrolysis cell stack were originally developed during the 1980s for submarine-based life support systems.