A team of engineers is working on building a fridge for spaceflight.

Advanced Manufacturing Aerospace Robotics Technology and Society
If there is one thing that almost everyone knows about the lifestyle of astronauts in space, it’s that the cuisine is not ideal. This is because most space shuttles have not been equipped with a refrigerator and consequently astronauts have had no way to prepare and store fresh food.

But the reality is that the first astronauts who go to Mars are going to be gone for several years and it would be impractical to store enough food to last the entire journey. So, they will not only be growing their own food, but also cooking and storing it. This is why NASA is funding a team of engineers from Air Squared Inc., Purdue University, and Whirlpool Corporation, through its Small Business Innovation Research program, to build a refrigerator that will work in various states of gravity to adapt to the conditions of the spacecraft. 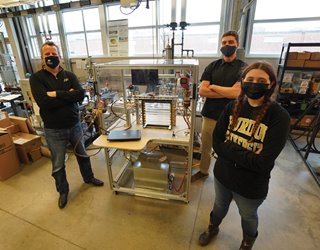 The team has added instrumentation to a normal refrigeration system, including multiple devices used to measure the mass flow rate of the refrigerant. Photo: Purdue University/Jared Pike
Most home refrigeration appliances use a vapor compression system. Refrigerant is pumped through an expansion valve, causing it to expand and absorb heat from inside the chamber. As it absorbs heat, it turns to vapor. At the heart of the system is the compressor, which elevates the vapor pressure so that the condenser can convert it back into a liquid and transfers it back to the expansion valve to lower its temperature and cool the food, starting the cycle over again. Typically the compressor requires oil, which lubricates the system to keep it running. The oil is cycled through an oil separator and drains back into the reservoir. This is where the issue of microgravity comes into play.


“In microgravity, the oil management would be extremely difficult,” said Leon Brendel, a Ph.D. student in mechanical engineering at Purdue. “That’s why we decided that an oil-free compressor would be ideal.”

Air Squared Inc., a manufacturing firm located in Colorado, specializes in oil-free scroll compression and is already testing their technology on Mars. The Mars Oxygen ISRU Experiment (MOXIE), is currently being conducted aboard the Perseverance rover. Through a process called solid oxide electrolysis, MOXIE is demonstrating the ability to convert carbon dioxide into oxygen in the Martian atmosphere, which could one day be used to generate breathable air for astronauts and potentially provide fuel for their journey back to earth.

“It actually just started generating oxygen for the first time,” explained Stephen Caskey, a project engineer at Air Squared and the principal investigator for the team’s contract with NASA. “It was very relieving for us to know that our compressor started firing up after that long journey.” 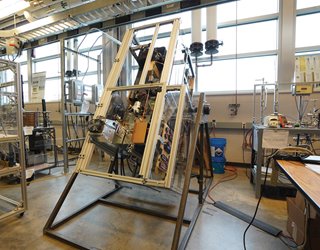 The prototype will be tested on a series of parabolic flights to see how it will behave in microgravity. Photo: Purdue University/Jared Pike
Knowing that their scroll compressor system works on Mars makes this refrigerator project a little easier, explained Caskey, as the two systems are comparable. Like MOXIE, the prototype that Air Squared has introduced for this project uses their patented scroll technology. In this system, the refrigerant will move from the periphery toward the center through increasingly smaller pockets, generating compression.

One of the drawbacks of the oil-free compressor, Caskey explained, is that the system has a lower thermal capacitance, so it tends to run hotter than a traditional refrigeration system. The team will have to get creative with potentially adding cooling plates to the scroll and the motor to keep those key components from overheating.


In addition to the prototype, the team has two other experiments, all of which will be tested aboard a series of parabolic flights where they can see how the systems will behave in microgravity.

“There has been very little research done in this area,” Brendel said. “To my knowledge, a refrigerator has never been tested on a parabolic flight before. So, it’s not like we can just pull a publication and read about what's happening to that refrigerator when it goes into the first parabola. We just don't have that.”

For this reason, their first experiment is dedicated to the fundamentals. They’ve added instrumentation to a normal refrigeration system, including multiple devices used to measure the mass flow rate of the refrigerant, multiple pressure transducers, and numerous thermocouples to get temperature readings, all in an effort to see if there is any detrimental effect to the refrigerator in microgravity.

The third and final experiment for this round of flights is to test how the refrigerant moves during start-up of the system and whether liquid refrigerant will reach the compressor.

“What’s a U-Bend in microgravity?” Brendel asked. “It’s basically nonexistent. There is no gravity to pull the liquid to the bottom of the U, so it cannot be used as a liquid trap. Still, at the same time, it's not even entirely clear yet whether microgravity really leads to an increased likelihood of liquid into a compressor.”

In addition, the team will have other experiments, which will be tested aboard a series of parabolic flights. The four flights will be led by the Zero Gravity Corporations, where they can see how the systems will behave in microgravity.

“The team will get to experience Martian gravity, lunar gravity, and true weightlessness as if they were in deep space,” explained Michelle Peters, director of research and education for ZERO-G. “We are the only weightlessness platform that allows researchers to manage their own experiments, hands on, repeatedly. It’s really amazing to see some of the advancements that come out of these flights.”

The flights will give the team valuable information that can be used to finalize their design. Under their contract with NASA, the team has about two years left to complete the design. From there, NASA will determine whether the system is safe enough and reliable enough to accompany astronauts on their first mission to Mars.