Aerospace Building Equipment Contractors Electric Power Oil and Gas Extraction Robotics
"Giant steps are what you take, walking on the Moon," sang Sting on a 1979 Police song.  But while that might be true for bipedal astronauts, it's not the case for unmanned wheeled rovers on the moon and on Mars.  It's all too easy for such a vehicle to get hopelessly bogged down in sand or otherwise trapped by terrain, as happened in 2009 to NASA's Mars Exploration Rover Spirit. And when an automated rover gets stuck 35 million miles from home, its mission is over. A team from the Georgia Institute of Technology, supported by the NASA National Robotics Initiative and the Army Research Office, is working on ways to avoid that. 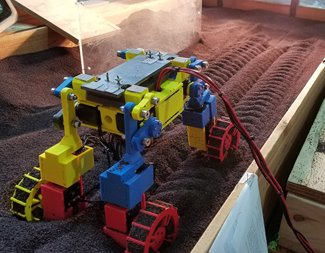 Student-developed model tested various gate models at different slopes. Image: Christopher Moore, Georgia Tech
Inspired by a prototype developed for NASA's Resource Prospector lunar project, the researchers created a scaled-down, in-house 3D-printed rover to study new locomotion methods.  "It's a pretty wacky beast that NASA cooked up," said Georgia Tech's Daniel I. Goldman, senior author of the recent Science Robotics paper, describing the work.  "It can drive like a car, it can spin all its wheels and pivot them, but it can also independently lift each one."

The prototype rover, dubbed RP15, was to be the first planetary rover capable of such sophisticated movements, but was mothballed when the Resource Prospector project was cancelled in 2018. "Nothing had been done in terms of kicking the tires, putting this thing through its paces and seeing what it could do," Goldman noted.

The RP15 combined elements of wheeled and legged robots, so that a single wheeled limb could also lift, tilt, and sweep. Because it was in some disrepair and not fully functional for testing purposes, some of Goldman's mechanical engineering students, including the paper's co-first authors Siddharth Shrivastava and Andras Karsai, decided to explore the possibilities by designing and building a miniature version called the Mini Rover. The smaller robot allowed the CRAB Lab team to investigate locomotion principles that couldn't be tested on the RP15.

The Mini Rover was tested in a tiltable test bed using dry poppy seeds as a granular terrain.  The experimenters tried various gait patterns at different slopes. As Goldman said, "[They] cooked up all these crazy ways to sequence limbs, many of which did not make it into the paper. But the two that did were a rotary sequence gait, which had already been proposed but again not tested in any systematic way, and rear rotator pedaling."

With the rotary sequence gait, the rover separately lifts and spins its four wheels separately to "paddle" through loose material.  If climbing a steep slope, the rear rotator pedaling gait "wiggles" the two rear wheels while the front wheels push back material. Both gaits allow the rover to maintain a slow but steady forward movement without digging itself into the loose material.

NASA designs such as the earlier Spirit and Opportunity rovers and the Perseverance rover scheduled to be launched in summer 2020 have been fairly conservative, using a six-wheeled, rocker-bogie suspension system.  Goldman explaied, "That worked pretty well for low speed locomotor challenges, nothing too steep, nothing too loose. But [the RP15] design came about because people said, well, we've reached the end of what we can do with this pretty limited mobility system."

Goldman's CRAB (Complex Rheology and Biomechanics) Lab at Georgia Tech researches the biomechanics of how organisms move through their natural habitats and the various soft and granular materials they encounter, building robots to test hypotheses and study locomotion principles. Along with the Mini Rover lab experiments, the team did theoretical modeling based on earlier work.

"We were able to bring to bear a whole lot of the tools and insights we've been using for other locomotion problems, including locomotion of sea turtles and mudskippers and other kinds of weirder robot platforms, and bring all those tools to bear on this problem," Goldman says. "The main theoretical modeling tool from this stuff actually descends from work we did 12 years ago to try to understand how a little lizard called the sandfish can swim in sand. The tools have continued to be of use."

Those tools and the locomotion principles studied by the CRAB Lab team may eventually have application not only on the moon and Mars but here on Earth for terrestrial wheeled and tracked vehicles. "We're building on something called terramechanics and augmenting that with some physics approaches to create similar kind of tools such as airplane designers and boat builders have," Goldman said. Meanwhile, future planetary rovers could learn a few new moves that will keep them going longer.

Mark Wolverton is a science writer based near Philadelphia, Pa.