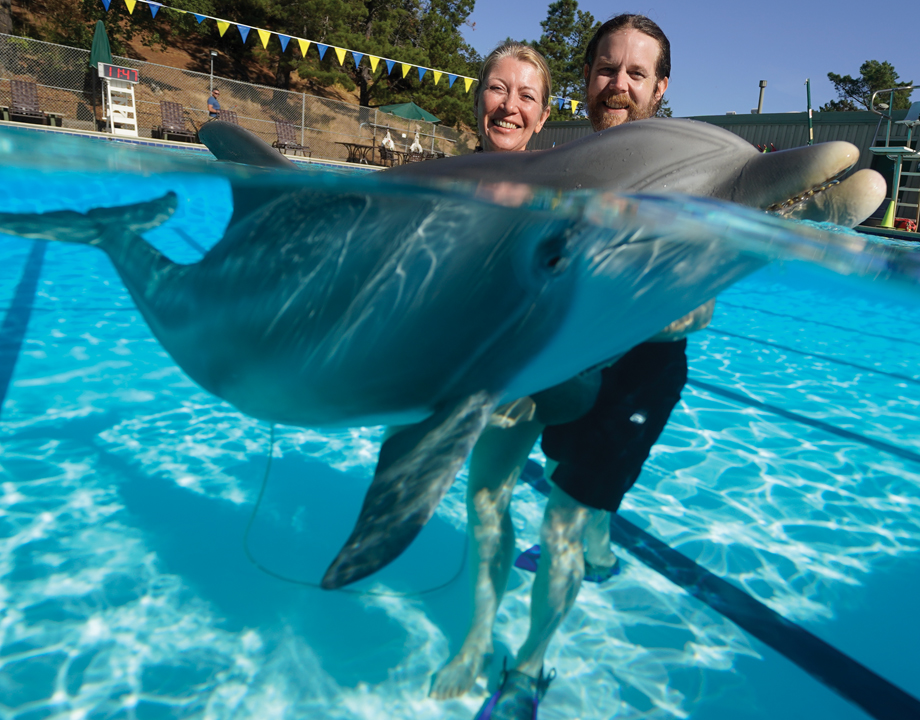 A New Zealand tech entrepreneur is collaborating with animatronics and special effect engineers to build not ducks but a lifelike robotic dolphin and possibly other marine mammals and large fish, like sharks. If successful, the venture could replace captive mammals and fish in aquariums and entertainment venues that now are in jeopardy, partly due to increasing international opposition to putting marine mammals in captivity, and, in China, because of its COVID-19 ban on wildlife trade.

“The real goal is to reimagine an industry that has seen its day and is now on its downside,” said Melanie Langlotz, who heads an augmented reality gaming platform for children in Aukland.

She came to the idea over a year ago when she and her partner were approached by a Chinese client who wanted them to design an aquarium with tanks for dolphins and live animals. Ethically, the idea bothered them. As an alternative they thought of animatronics, but were met with skepticism. As a piece of “engineering art,” she said those with whom she consulted thought the combination of electronics, salt water and durability posed too great a challenge. 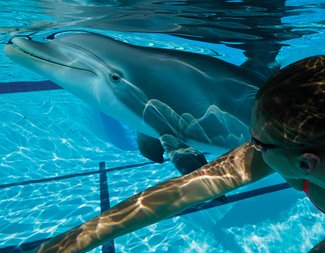 Robotic dolphin uses artificial intelligence to swim like the real thing. Photo: Edge Innovations
Then, she found two animatronic experts who used earlier versions at Disney, and created special effects and robotic animals for the motion pictures Jurassic World and Star Trek IV.  Roger Holzberg is a former vice president and creative director for Disney Imagineering and Walt Conti is founder and CEO of Edge Innovation, the firm that built robotic whales for Star Trek. They finished work on a lifesized, anatomically accurate robot dolphin earlier this year.

Details of its inner workings are proprietary, but Holzberg said the biggest challenge is attaching and integrating the skin into the machine, especially its fat bladders. The robot simulates the skeletal structure, muscular interaction, fat bladders and weight deposits of an adolescent bottlenose dolphin.

The lifelike image begins with the skeleton, “a metallic skeleton [that is an] articulated replica of real anatomy, although simplified to large degree,” said Holzberg. “All of the major skeletal pieces are accurate so it governed for the appropriate range of motion.”  Major muscle points articulate with the skeleton.

The dolphin is powered by a battery and electronic servos placed throughout the body to mimic a dolphin’s natural movements and propulsion. “The tail of the dolphin has servos with pick points, governed to keep a realistic range of movement,” he said. Secondary servos power pectoral fins, used for stopping and turning.

More for You: Video: How Countries Invest in Robotics

The latest version of the robotic dolphin was based on two earlier versions, said Holzberg, who became enamored with the animals as a child growing up in Florida where he swam in pens with dolphins that were trained for the television show Flipper. Much later, at Disney Imagineering, he was tasked with finding new types of attractions for the Living Seas exhibit at Epcot Center. He then reached out to Walt Conti, who already was building free-swimming animatronic robots for the movies.

“He was the only engineer to figure out how to deal with hydrodynamics, propulsion and puppetry,” he said.

In the late 1990s, the result was a proof-of-concept pilot “that acted as an ROV with a marine biologist” swimming alongside, he said. It had basic skeletal engineering and was needed two operators to swim the dolphin as a puppet. Controls were hidden beneath a vest and it was operated tethered to a power cord.  Another test operated using a battery.

Reader's Choice: A Robot for the Tiniest Surgeries

“If you start a type of turn, it will complete it and look natural,” he said. “AI will bring it back to the surface with appropriate behavior.”

Two details the robot lacks are a working blowhole and eyes that .track movement. But that goes unnoticed by anyone but a scientist or biologist who studies the animal, he noted.

Key to the robots looks and operation is the skin, a special formula of a sprayed medical-grade silicon-based sealer developed by Edge, according to Holzberg. Details of how it is integrated into the robot’s musculoskeletal frame are proprietary.

The third version would include a working blowhole and a greater application of artificial intelligence.

“Assume that a  large aquarium is open for 8 to ten hours a day,” said Holzberg. “Assume there will be an entertainment show and educational show, and those shows might happen on two hour intervals. We will have onboard batteries with 10 hours of life, an autonomous mode to swim in the tank, make turns, and simulate breathing.”

Langlotz envisions an aquatic operation with more than just dolphins. Those would be the smallest of the robots if the aquatic menagerie includes orcas, sharks and other large marine mammals or fish.

“The goal is to build with 10-year lifespan,” she said. “If you amortize out it is far more cost effective.”

Projecting costs right now “is a bit tricky,” she said, because efficiencies of scale will drive costs down; Building only one robot is too expensive. “We can save an aquarium so much money over ten-year period compared to live animals,” she said. “We can save a quarter to a third in terms of cost.”

Langlotz said there continues to be great interest in the venture, largely from Chinese clients who now cannot stock or replace live animals. “Audiences are still hungry fo entertainment and education with marine animals,” she said. “Now we can deliver new kinds of action in ways never seen before. This enables the idea of great white sharks in an aquarium where you can see how they react to a splash in the water, for instance.”